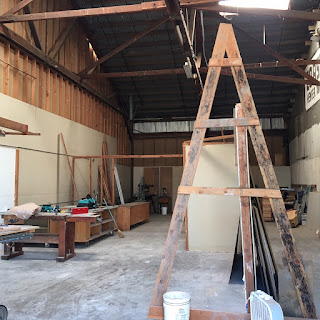 A previous tenants hoarder piles of stuff , an angiogram with a bit of a problem afterwards , walls that needed to be moved and six dump runs that have not completely cleared the room- all this stuff has maybe slowed the move and delayed it but it progresses anyway. 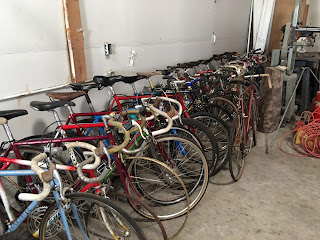 This is a big space but it is getting filled up pretty fast. There are still some big rolling tables that need to be elsewhere that were left behind by the previous tenant but the will eventually go- they have to in order for me to move in the big machines. I'm not losing patience, though......I remember the last move and what it took to get all that crap out of the old spot and down the street to the new digs. Here it is, less than three years later and I'm doing again. 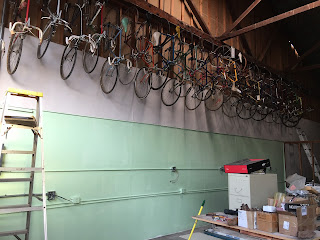 Getting the bikes up and out of the way was key yesterday. I have a big crew coming in today to help with all the small stuff, mostly steel tubing and bike parts left to move. After that it will be all the big stuff-hopefully the 8-9 days I have left in the month will be enough.

Posted by swiggco world at 7:39 AM