Feb. is coming to an end with an aluminum batch 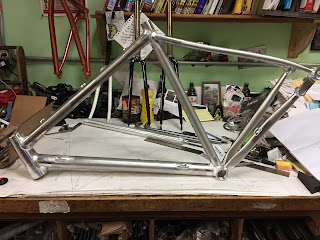 Hope that you like the look of this CX frame- this is the way all the new team frames will look. I have added some features that riders have requested and one that I thought was needed. 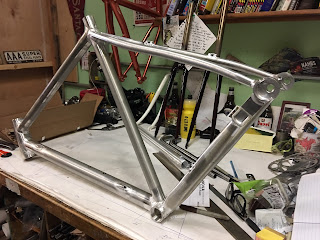 #1. The hydraulic line for the flat mount rear caliper runs inside the down tube.
#2. The top tube has a flatter profile for more comfort when shouldering.
#3. I have done away with the seat stay bridge and have added a gusset higher up- this takes away one of the places that mud typically builds up on- this was my idea, stolen from some other brands. 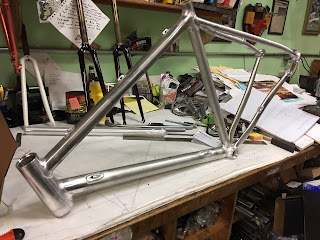 The goal is to make a more modern bike for competition - small improvements but they were needed.A frame like this will cost $ 1,750. This frame is identical to what I build for the team currently. It represents the most advanced design I have yet produced. Count on a 5 month wait to get one- they are all made to measure- I have not made plans to make stock sizes of this unless I get the demand and more importantly,  the time. 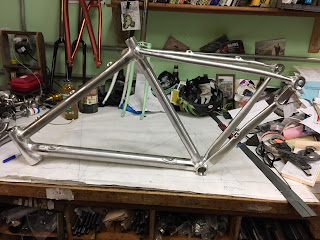 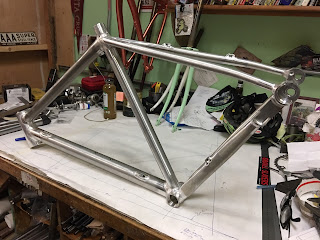 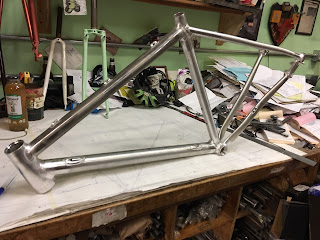 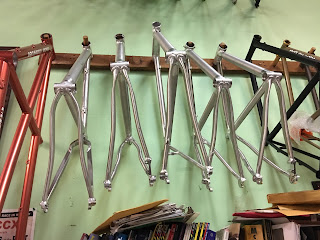 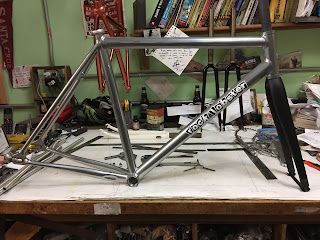 The finish on this is called 'super chrome'. It really looks like nickel plate, even though it is a powder coat. The frame is paired with a 40 mm rake Enve road fork- the closest thing in carbon I could find to a proper track fork. 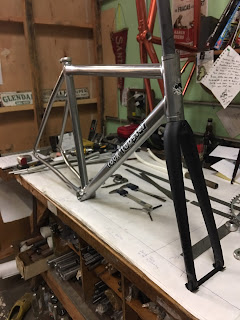 The mass start platform is made for general track events such as points race, miss-and-out and Madison. The idea is to have something that is solid for all these races and not a specific pursuit or sprint specific frame. 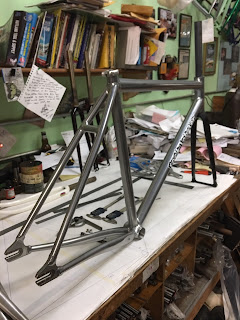 I hope that it makes the rider happy- I have a pretty long record of making bikes for the velodrome and will be displaying my first track frame, made in June 1978 . This will be at NAHBS in Sacramento in about 4 weeks.
Posted by swiggco world at 7:47 AM No comments: 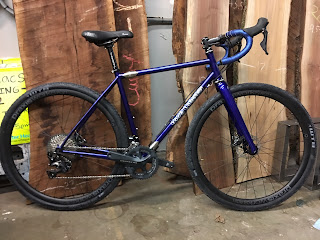 This S&S coupled steel gravel bike will be going to Montana. The disc brakes are cable actuated- this makes the disassembly for travel a lot simpler than it would be with hydraulic brakes. 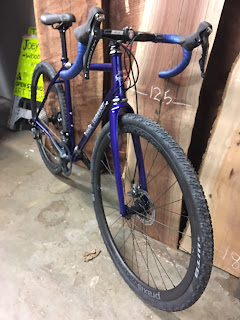 The parts are mostly Shimano Ultegra with the XT rear cassette and derailleur for maximum gear range. The bars have a very short drop as this rider was hoping for a more upright position. 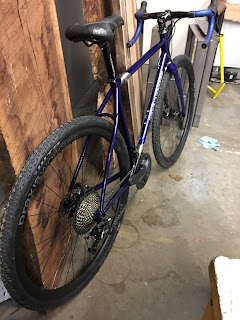 The tires are set up tubeless on the Praxis carbon wheels.
Posted by swiggco world at 12:34 PM No comments:

Two bikes for sale- an estate of a friend 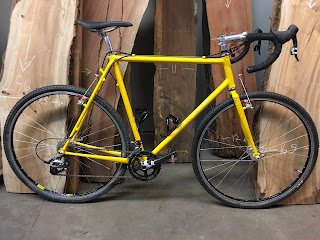 My friend and fellow frame builder Michael Knepp passed away from cancer two weeks ago. I have been given the job of selling two of his personal bikes. Mike's passing is very sad as he was a very creative person to say the least. He was an avid painter who sold his works in galleries in the bay area and elsewhere- he was building flamenco guitars in a centuries old style at the time of his death- and in the last couple of decades he built some very nice lugged bicycle frames. 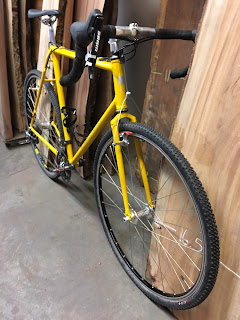 This bike pictured is his personal CX bike, constructed with double oversize tubes and lugs. It really is a very clean and solidly built frame and fork. The seat tube is 59 c/t/c and the top tube is 57 c/t/c. This bike would be good for a 6'-6' 1"  rider. It has Sram rival along with King hubs, BB and head set. The bar,stem and post are polished silver Ritchey design. The bike comes with Crank Brother's candy pedals and a specialized saddle. Asking price is $ 4,000 but offers are open. 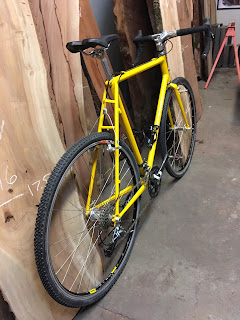 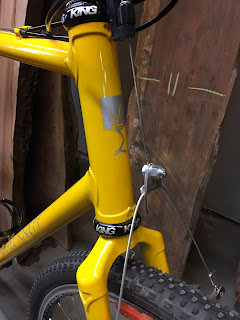 The bike below is a 29er I built for Mike in late 2016. It has a 17 1/2" seat tube c/t/c and an effective top tube of 24". It can take 29x2.25 tires and has thru-axles F&R. the head angle is 68 1/2 degrees, making this a pretty current edition of what I build in a steel 29er. Like the bike above, it has been meticulously maintained . The bike has Sram XO drive train with King hubs, headset and BB. The bars and stem are Thomson- the post is an external Thomson dropper. Mike didn't like the Sram brakes so he replaced them with Shimano XT after about a year. This bike has very low miles as Mike got sick about a year after he received the bike. Asking price is $ 4,000 but offers will be considered. Feel free to email me at paul@rocklobstercycles.com or call me at the shop at 831-429-8010 to find out more about these bikes. They are very clean and ready to ride. Mike is leaving all the proceeds to his next of kin. I know that Mike would be really happy to see these bikes being used again. 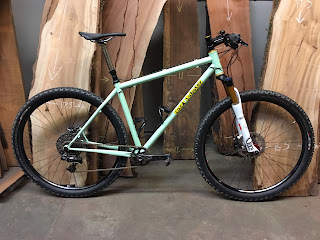 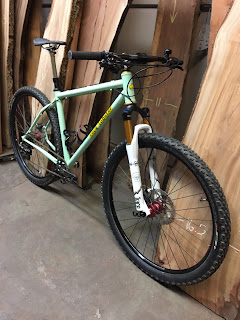 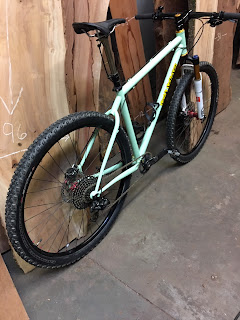 Posted by swiggco world at 8:13 AM No comments: 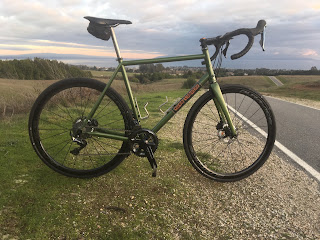 This paint was done by Dark Matter and was designed by the owner of the bike- my former next door neighbor and guitar builder extrodinaire, Jeff Traugott. 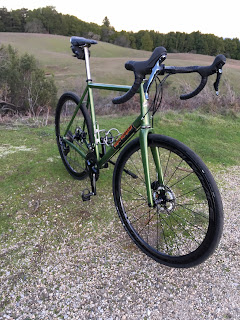 I have built a number of bikes for Jeff over the last two decades and I always try to outdo the last one. This is the newest example of the disc-road platform- steel frame, carbon Enve fork, Dura Ace mechanical hydraulic group, Easton EA-90 stem with the integrated computer mount . 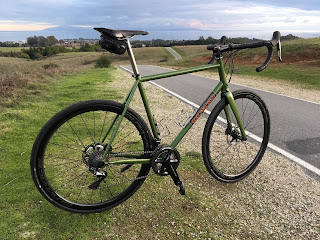 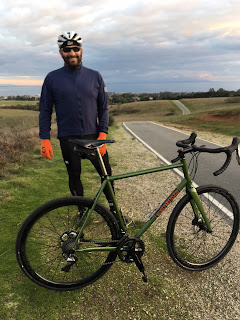 the smile says it all- making people happy is what it's all about.
Posted by swiggco world at 8:16 AM No comments: