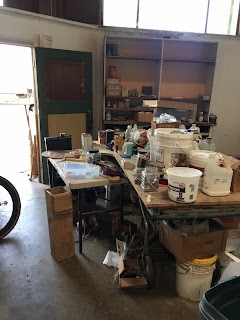 Last time I moved I was hoping that it would be the final resting place of Rock Lobster. This turned out to not be the case so now, a little less than three years after the last move I'm pulling up stakes again-only to move back into the building I was in before. I won't go into the reasons for the move but the opportunity to get into a larger shop with more natural light, better ventilation and less rent was too good to pass up. That said, it has not been an easy road getting there . 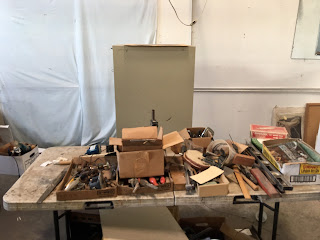 The new place was rumored to be opening up about a year ago- the old man who was renting there had given notice. This was followed by many months of stagnation and procrastination by the old man, and who could really blame him. He had been a sculptor in the space for 36 years. In the last decade he had pretty much stopped working and had used the studio as a storage space. This was not good as he really was a hoarder of all sorts of stuff. The photos of the interior you see here were taken just last week - after nearly a year of trying to move out. The old man could not let anything go or decide what to take home. Most days when he was intending to come and sort through stuff at the studio he would just drive up in his van, not get out but sit there for a time and then drive away. Moving out was not really happening and as a result, I had a very long wait. 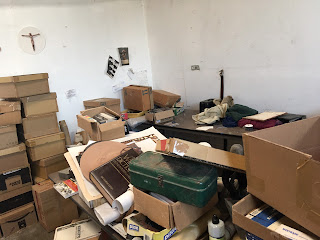 In March I heard that the old man gave notice again that he was moving and he had stopped paying rent. I was able to meet with the building manager and get a rental agreement and pay the first month's rent at the beginning of this month. This was at least 6 months after I have been approved and had put down a deposit and had paid a legal fee. I was not in that big a hurry to move but I really wanted a firm date so I could plan. I was told that the space would be mine on April 1st. 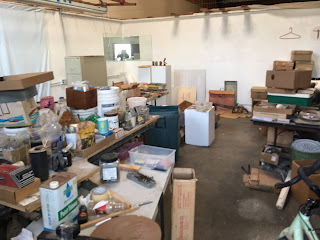 This was not quite correct as the old man had moved very little stuff out of the space , even with a whole year gone by. I could not move in- I was essentially paying the old man's rent to store all his remaining stuff-I didn't quite know what to do. The landlord had told me that it was now my job to clean out the space as they had given me the original security deposit from the old man as he had not cleared the studio out , even after a year and it didn't look like he was going to do it-even after I and my shop mate had done four dump runs for him. 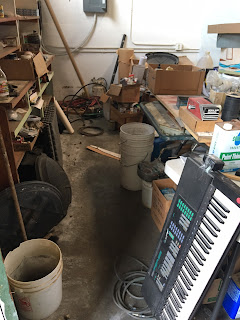 I didn't want to disrespect the old man-I know that in time I will be in the same place as him-looking at a shop full of accumulation not knowing how to deal with it. The old man's family and friends were absent-maybe he had burned bridges, maybe he had not asked anyone to help. He was trying to deal with this mountain of mostly garbage by himself. 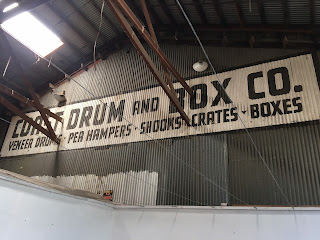 My wife came up with an idea-schedule a hauling company to clean out the studio on a set day. I told the old man to remove anything he wanted to keep by mid day on the 9th. This would give me 3 weeks to move my entire shop- not really enough but I had to cut the old man some slack. His pile of stuff had gotten away from him and at his 86 years he was not really able to wrap his head around even parting with empty cardboard boxes. We agreed on the date and late in the afternoon the big truck came and a crew of three guys emptied the space. I kept nothing except a hospital gurney ( what the heck was anyone doing with that ? ) which I was giving away to my shop mate and one empty file cabinet that I would use.

I looked at the empty space last night and was relieved- I would have a place. The old man wound up thanking me for helping him cut loose of all the stuff that had anchored him to that spot where he had done decades of work but had not really used in a number of years. I was glad to have reached a compromise with the old man, even if a lot of work and cash had to be spent. I know that this shop will probably be the best space I have ever had and that I had a responsibility to honor the space and the old man by being creative with what I do there, how I set it up and by making my work count toward some goal greater than earning a wage. After the breach-birth of this move I think that it will not be difficult to meet that goal.

Posted by swiggco world at 9:15 AM No comments: 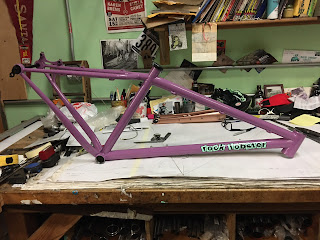 This order was originally going to happen in 2018 but life got in the way and it went on hold until a few weeks ago. This was going to be a gravel bike order but the customer wound up moving to a different state where a bike like this would be the thing. 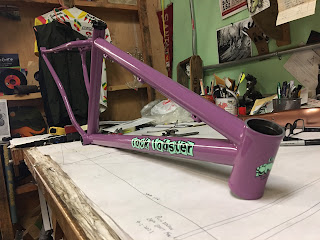 The tubes come from a bunch of different sources. The seat tube is a Velospec. The down tube is Vari-Wall. The head tube is from Paragon. The chain stays are from Dedacciai. The top tube is from True Temper. The seat stays are from Nova Supply. This is the current MTB mix that works for me. 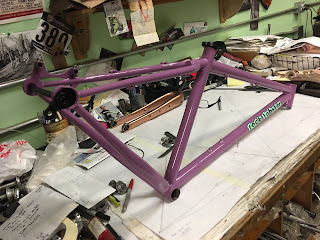 Although you can't see it , this one also has dropper post routing internal on the seat tube. I would love to have a single speed version of this but I have to wait what the cardiologist has to say next week. I might have to lower my output on the bike a bit.......hope not. 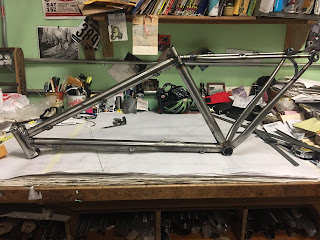 I think I have built about 6 MTB frames so far this year out of 26 completed. That means that almost 1/4 of what I am building looks like this frame. In the last few years I have only building maybe 3-4 MTB frames in an entire year so this is a bit of a change. I do like going back to my roots-I used to pretty much build MTB frames all the time back in the '80's and '90's. 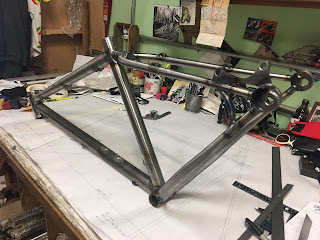 This one will be paired to a 120-130 travel fork and see duty in the Sierra foothills most likely. 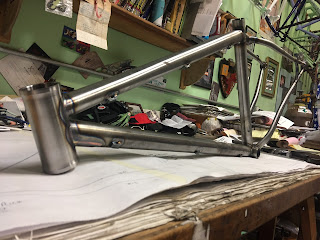 Posted by swiggco world at 6:57 AM No comments: 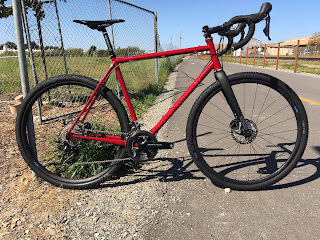 So- what is the Covid build, you might ask ? It is simply this- use what you can get at the time you can get it. This bike is a classic example of that- making a bike out of a mix of stuff that was available at the time. In this case , the customer found a slightly used Dura Ace hydraulic group for sale used. I just happened to have a set of Shimano GRX wheels in stock, along with a set of flared Marin branded handlebars. The rest of the stuff was able to be ordered. 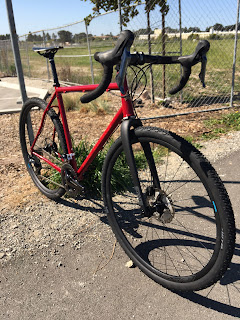 The result : A 700x40 gravel bike with the fancy drive train and some lower priced but solid tubeless wheels. This bike will be on the dirt roads and trails of the Santa Cruz mountains as soon as this weekend.I hope that the customer likes his 'Covid' build. 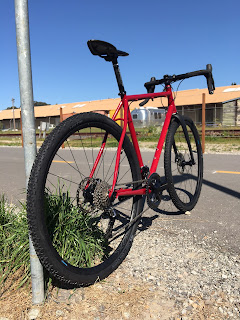 Posted by swiggco world at 7:51 AM No comments: 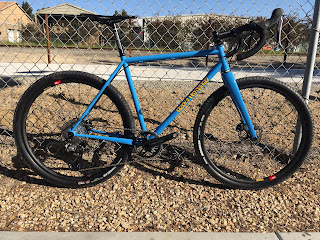 Here's an example bound for southern Calif. and the Santa Monica mountains. The tires are Maxxis 47's and fit in the frame well. The parts were not easy to come by as Covid has made bikes hugely popular and suppliers have been drained at all levels. I was able to make this nearly all GRX 810 with the exception of Praxis cranks and BB, a very good substitution in my experience. 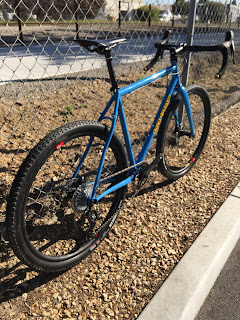 The customer opted for Santa Cruz select-25 carbon wheels laced to Industry-9 Torch hubs . This is literally putting the money where the rubber meets the road-make the bigger expense on the build something that really counts in terms of ride quality. I did not get a chance to ride this bike before boxing it up but I'm sure that it is quick. 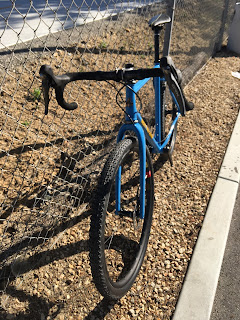 The last detail is the Jen Green copper headbadge, always a nice touch. The Easton cockpit is solid and the seatpost has what I consider to be the best design on the market-easy to install and adjust the saddle- an example of something done thoughtfully for the end user and mechanic. 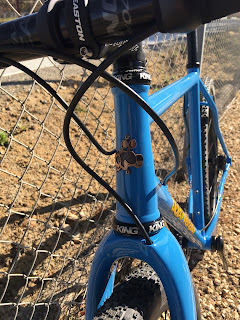 Posted by swiggco world at 7:43 AM No comments: 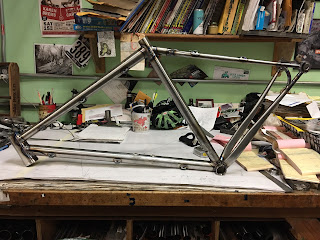 I built a 29er frame for this customer in 2014. He was diagnosed with cancer while he was waiting for his build to come up. He got treatment and had me proceed with the build. He recovered from the cancer and rode the bike a lot over the last six years. 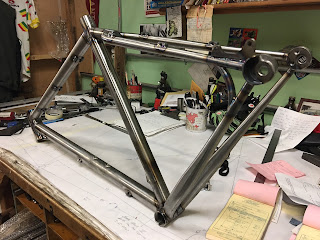 Right after he recovered from cancer he moved out of the area and up into the foothills as he had just retired from his job as a bus driver. The area where he lives was in the path of one of the big fires last year and he lost his house and the bike I built for him. 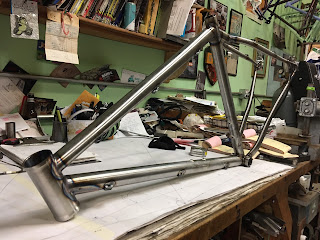 Fortunately, he had good insurance so the house will get rebuilt and he ordered a new frame. I'll be doing the full build if I can get the parts he wants- no easy task these days when everything is on backorder. Still, I feel happy that this customer will have one of my bikes again to ride in the sparsely populated woods where he lives.

Posted by swiggco world at 7:15 PM No comments:

Goodbye to my CX bike 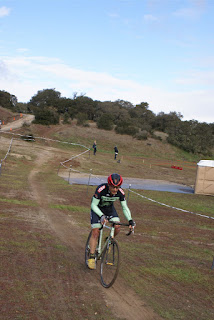 This was not an easy bike to let go-my race bike for most of my racing of the past 15 seasons. I had had it hanging on a hook for quite awhile and only pulled it down in the last few weeks. I did a few good rides on it and remembered what a good bike it was , especially as I had done a pretty complete tuneup of it before it was taken out of service for the most part. The only races I have ever won in CX (2) were on this bike. My best races were all on this bike- not to take anything away from my newer bike but I don't seem to go as fast any more.

Since I have been getting ready to move my shop I have started letting go of things that I thought I would keep forever. This bike was one of those things-GX-2 Scandium made in the USA, the best non-ferrous material I have ever worked with and long out of production. I will not ever be able to replicate this frame again-I'll have to make the best out of what is available now. Someone came by the shop and was the perfect person to pass this bike on to so I do feel good about that. Goodbye, old friend.....it was a hell of a ride as they say. I hope that the new owner has the same feeling when he rides the bike that I had all those years.

Posted by swiggco world at 7:08 PM No comments: