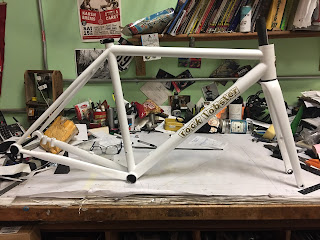 I don't build many of these as it takes a pretty tough person to really ride one . This is oversize Columbus Spirit tubing and it should behave almost like an aluminum frame with tons of power transfer. That comes with less compliance but for what this bike is built for , all these aspects are what one should expect. 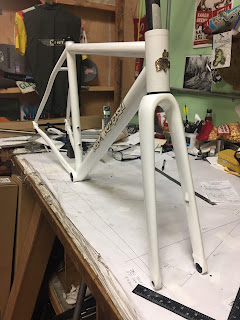 Being that it is steel tubing and much thinner walled than aluminum , it will ride differently. It should be a bit more forgiving over the bumps but it still will be a very stiff ride, especially in this smaller size. I hope that the customer really likes it. It was interesting to build for sure. 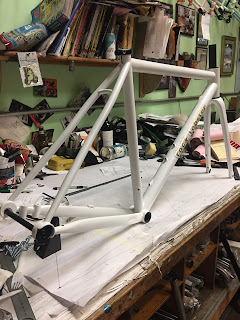 Posted by swiggco world at 7:45 AM No comments: 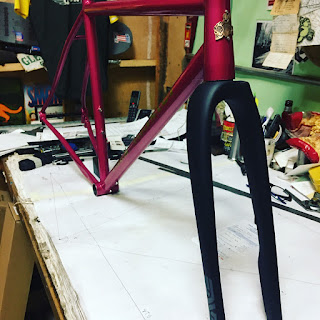 Complete with the Jen Green copper head badge this one is typical of what I build the most of . There are variations such as versions with rack mounts, versions for 650 wheels and others. 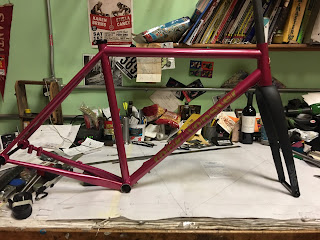 The tube set is pretty stout being .8.5.8 wall pretty much throughout. This helps with resistance to denting and crumpling upon impact. People tend to ride bikes like this really hard so I try to build them to last. 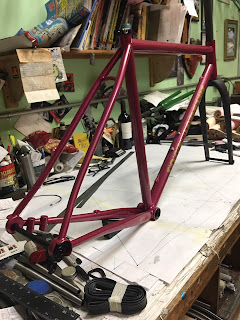 Posted by swiggco world at 1:59 PM No comments: 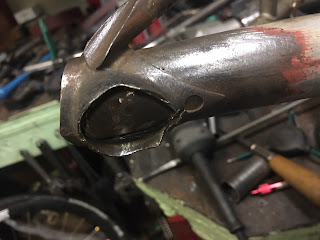 Some time around maybe 1992 I got the word from a local racer/mechanic that he had an old Colnago frame that needed some repair work done. Having repaired a number of Italian frames in the 13-14 odd years since I had first lit a torch I figured that I would take on the job. The repair was to replace the top tube. There was a fairly large dent in the tube but I was sure that I could roll it out and fill it and make it pretty much disappear. The racer said "No, I'm willing to pay for a new top tube-that's what I want." What you see in the photo is what is left of the seat lug after I heated it up and pulled out the top tube. What I didn't know was that there were pins through the lug and the tube so when I heated up the tube and pulled, the lugs literally ripped apart. 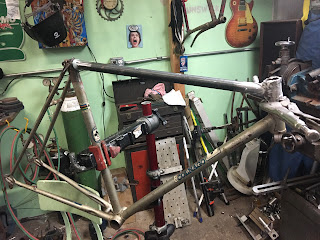 Upon getting this result I told the racer " I'm really not sure what to do to finish this job- it totally went south and I'll need some time to figure out how to make it right." The racer told me that he was not worried and that he was in no hurry. I hung the frame up in my shop and a couple of years went by. I would look up at it and think : "What the hell am I going to do with this thing ?" I was stumped......the fact that the customer didn't care how long it took made it easier for me to procrastinate indefinitely, it seemed.

At one point I tired to contact the customer but his former employer told me that he had moved out of state and had left no forwarding address or contact info. He was kind of a sketchy guy so this was not unexpected. I figured that he would call me when he needed to.

Well, he didn't. I had this frame through a couple of shop moves and nearly three decades went by. As chance would have it, one of his old friends came by the shop about a year ago . I asked the friend if he knew the racer's whereabouts to which he replied: "Oh......he died of a drug overdose a few years ago." Now I was really off the hook- the frame was worthless unless I did the work to make it roll again. There was no fork with it so I would have to cob together a reasonable facimile of a 1970 Colnago Super fork. Fortunately, a builder friend of mine had a fork crown with clover cutouts in it that looked pretty good and I had the right blades and dropouts. Another builder friend had some clover cutout lugs I could use to re-build the seat lug and replace the upper head tube lug. All I needed was to make the time to do the job. 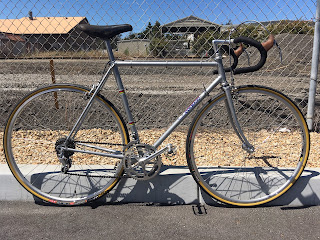 While it took the better part of 28 years for me to get around to fixing this frame , it only took about 3-4 hours to do all the work. Having all that experience under my belt in those 28 years really helped. I wanted to fix this frame and make it a rideable bike. I had the right decals and had the frame powdercoated in the same silver as the original paint. I took note of the decals and placed them where the old ones were to really try to make it look authentic. I'll admit- it is not perfect but I don't think that there's too many people left out there who can properly do this work. I know that if I didn't fix this frame, there's a really good chance that nobody would. 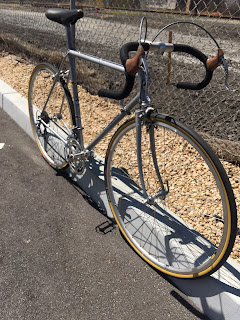 I decided to build it up with stuff from close to the period when the bike was built- that is except for the rims. I wanted it to be a rider, not a wall hanging. There was a time when this bike was raced really hard back in the '70's and I knew that in its day it was a really special bike-not like later bikes of the same make. I wanted to honor that with how I did the repair and to a large degree how I built it up. 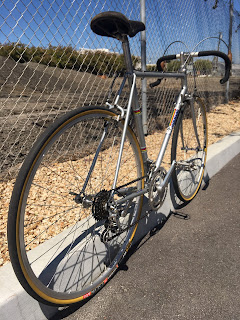 After the whole bike was built I really didn't know quite what to do with it. It was a bit too small for me and seeing as how the previous owner had died, I could not feel good about selling it. I came up with the right plan- I had a friend who had had bad luck with getting bikes stolen . He had lost more than a few really nice custom bikes over the years......just bad luck for the most part. He had sold off some bikes as well and one of them was a really beat up Colnago of the same size as this one in the photos-my restoration project. My friend lamented online at how he missed his old red Colnago and wondered where it wound up. I remembered that bike and how beat and sketchy it was.....the plan was clear: Give this bike to my friend.

About my friend: He's pretty much a lifer in the bike business. He constantly does stuff for other people, always shows up when there's a crisis or something that everyone else is neglecting that needs to be done.He is the most giving person I know and he never asks anyone for anything. I though that it was about time that someone did something for him- that someone was me.

I have been very fortunate to be able to make a living as a bicycle frame builder. It has not always been a happy journey but the help and support I have gotten from the Santa Cruz cycling community and some of my fellow builders had made this unlikely work path possible. As I near the time when I'll be slowing down and cutting back on my work hours I feel that this last part of my career has to involve some giving back to the people that have figured large in my work life. This is one small step in that direction......too bad that someone died before getting their frame back but in my mind I think that this bike is really where it is supposed to be. 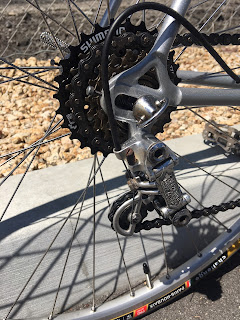 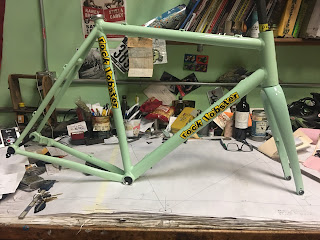 This one has a painted to match Enve G-series fork and the original 1984 yellow and black logos that I sketched up back over 35 years ago. This was the only color combination I offered for nearly a decade. 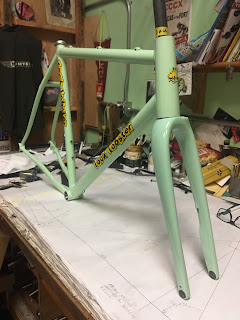 The build will be a mixture of Shimano Di II and Easton components. It will be tricky to fit the wires into the shell and have them miss the 30 mm spindle on the Easton crank but I have done it before- it is some work but I'm ready to take it on. 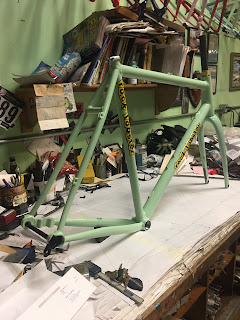 Posted by swiggco world at 7:09 PM No comments: 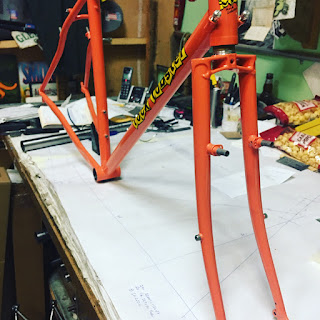 This frame has some nods to the pre-disc era- a crowned fork with raked blades and smaller diameter main tubes. I really like building frames like this and am happy that they are staging a bit of a comeback this year. 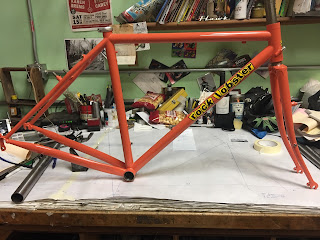 This one is made to take some 700x40 tires and it probably could fit a bit larger ones as well. 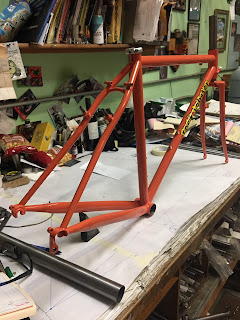 The short taper Columbus stays have really become a staple on my steel frames.