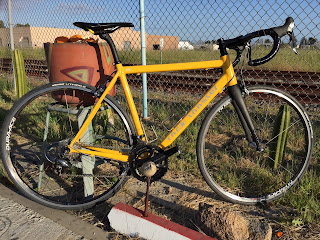 This one will wind up on the website whenever I get my act together and have all the photos. 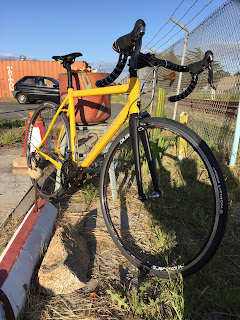 The tube set is Dedaccai 7.9, pretty much the lightest stuff I'll use. The integrated headset and tapered fork are becoming a staple on nearly all of my aluminum frames. This bike without pedals weighed 15 lb. 9 oz. with mostly Dura Ace 7900 , an Ultegra cassette and a Praxis crankset. The tires are not particularly light so getting this thing under 15 lbs. would only take putting on some fancier tires and a Dura Ace cassette, not that I'm going to do that soon. I want to put some miles on it as is. 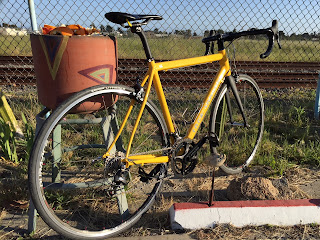 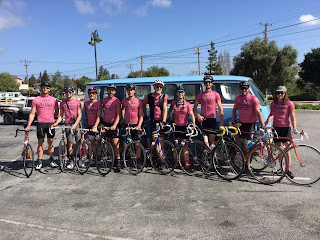 This ride was an idea I had a few months ago- really had to wait for the good weather but the wait was worth it. With only a week to go until the Eroica California the newly assembled 'Cycles Heroic' team gathered for an all day excursion of Monterey and San Benito counties took shape in the parking lot of a market in San Juan Bautista. 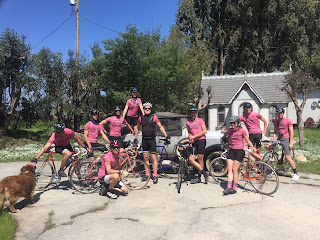 The ride was originally set to go over a dirt road to the Salinas valley but the previous few days of rain scuttled that plan-instead we headed over the venerable San Juan Grade to the old stage road. We had a wine and cookies stop at Amanda's parents house-then it was south to Gonzales and Gloria road- the one dirt stretch on the route. 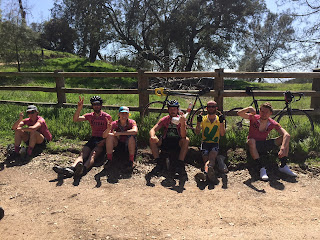 Gloria road is a sandy track that rises about 2,000 ft. above the Salinas valley. This is a pretty tough climb on a modern bike but doubly so on a '70's road bike with tall gearing. I think we all got a good workout on this one and by the time we reached the summit most people were out of food and water.The group broke up predictably on the climb and again on the descent but on Hwy. 25 it was 'Trasho-compatto' again. 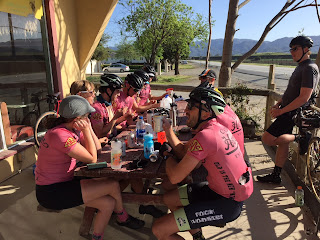 The next stop with any store was Paicines, down Hwy. 25 about 20 miles. It was into the wind but the headwind was thankfully not that bad and there were many riders to help with the pace. The remaining 18-odd miles back to San Juan got pretty speedy to the end so after the ride it was decided that a big Mexican meal at El Jardine was the call. 14 of us invaded the place and spent nearly two hours replenishing the 2600 calorie deficit from the lengthy days ride. This coming weekend the same cast of characters will be in Paso Robles, drinking Chardonnay and racking up the vintage casual coastal experience on the ride with the greatest number of bike collectors on the continent.
Posted by swiggco world at 7:52 AM 1 comment: