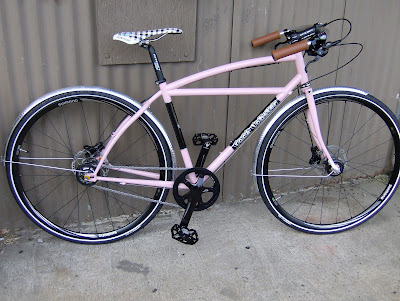 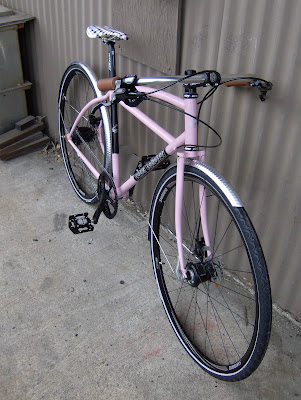 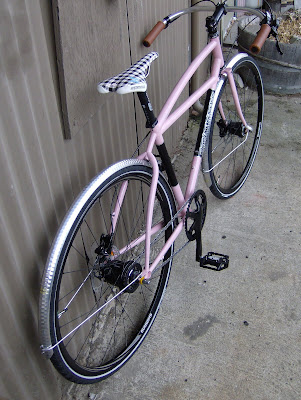 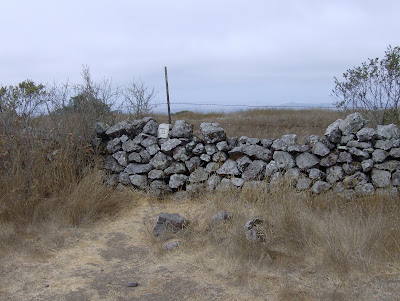 For all of you folks who weren't there, here's what it was like to ride in the Single Speed world championships at Napa, California. This wall is on a ridge on one of the upper parts of the course. The race was three laps, the first a bit longer and hillier than the last two .The race started with everyone walking thier bikes down to a meadow about 200 yards from the start. The start consisted of a run around a corral and down a fire road to the place where the bikes were parked. This run was probably about 1/4 mile, give or take. The 300-400 riders found their bikes ( not that easy to do, actually) and formed a dusty promenade up and out of the campground start area and immediately into a long steady climb. It was possible to pass people on this stretch so that's what some of us did, finally settling into a pace. The first lap had a lot of easy riding to start with but after a few miles the real race started with a long hike section, too steep to ride for most of the folks back where I was. The hike got harder and harder with some rocky and rooty sections that made it tough to roll the bike. Some flat and fun descending led to another even more brutal rocky hiking section that was a real scramble . Once the top was reached, the most rocky and dangerous descent was right around the corner with many cheering and heckling folks on either side, waiting for the inevitable wipeouts. after this dicey section there was some nice wooded rolling singletrack with a water stop before the final climb. The last Descent had some great switchbacks and a little creek crossing, a bridge, some nice slalom type turns and a final approach to the finish where a huge crowd was yelling and encouraging the riders. Some people elected to quit after the first lap but most went on to the shorter but still brutally hard second lap.If it wasn't for my wife handing me cold bottles I probably would have packed it in earlier. It was midway through the second lap that the leaders came past-it was humbling to know that these riders were in effect already a full hour ahead of me and still flying along as if they had just started. After riding the first lap non-stop I got the urge to stop at the water refill station and get a tiny bit of rest. I knew that the worst lay ahead and I would need to really be extra determined to start the third lap. After all of the riding in the first lap-and-a-half I was tired enough to walk some of the technical rocky sections I had cleaned on the first lap. I limped into the finish area just after 1 p.m. . the race announcer had said that anyone finishing the second lap later than 1;30 should probably quit at two laps. Knowing that i had a little time, I elected to weakly get rolling again for the third and most punishing lap. The first rideable climb led to the long hiking section and I passed a few riders that were having trouble just walking their bikes. I wasn't feeling all that great myself and slowly made my way along. By the time I got to the water stop I was really spent but figuring that I had only aobut another 1/2 hour of torture left I was confident that I could make it the rest of the way. Near the top of the last rocky climb I had to stop as I was almost dizzy with exhaustion and dehydration. I looked and saw I had one swig of coke left in my bottle-I gulped it down and it woke me up like a bucket of icewater in my face...I didn't feel good, I just felt awake again and made it to the descent.By this time the hecklers and crowds lining the trail were gone, I was alone in my painful clumsy journey down the hill. Now my arms and hands were pretty much toast so I didn't even try and ride the rocks and walked my bike to the safer part of the downhill. I pathetically limped up the last hill and saw the campground just a few hundered yards ahead and made a big push to get there as quickly as I could. I rode around the camp and to the finish where several hundered folks were congregated.When I stopped someone asked me if I wanted a beer.......I was too sick for anything other than water and stayed that way for an hour and a half. As it turned out, a large number of riders didn't start the last lap, pretty much getting wasted by the first two. It was one of the hardest things I have ever done on a bike but it was over and I was in pain but pretty satisfied that I was able to ride the distance. Here is my bike with the picnic plate number and a bit of Napa dust still on it. It served me well. I want to thank my wife Holly for the help and encouragement, my team for busting ass and Curtis of Retrotec for putting on the best SSWC ever. 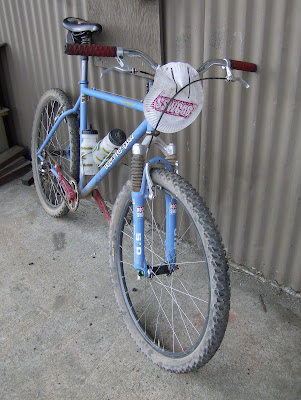 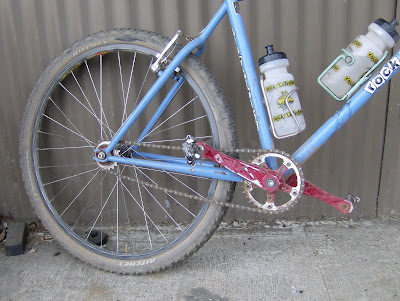 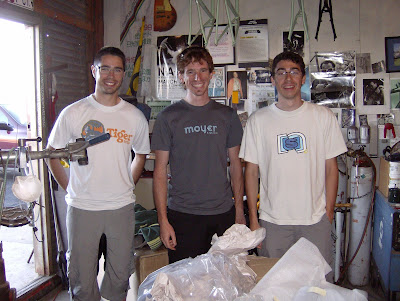 Boy , I was sure surprised when my wife called and said three guys from France were looking for my shop....I don't even have any bikes in France ! I guess with the internet people all over the world can get to know about your existance without your knowing about it. I gave thee guys the shop tour and told them about how things started here in Santa Cruz in regards to the whole mountain bike thing. These three are in the U.S. mainly to ride in the SSWC this Sunday in Napa. I think they will have a great time. 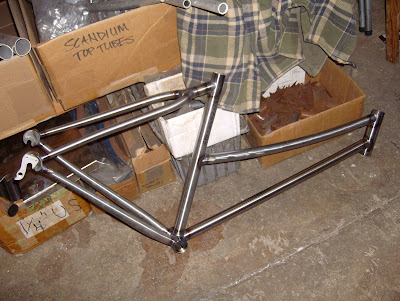 Lightining strikes twice again....it's another ladies town bike, this one bound for Palo Alto and a 64 year old rider. I hope she likes it....I did my best to make it light and comfortable.
Posted by swiggco world at 8:46 AM No comments: 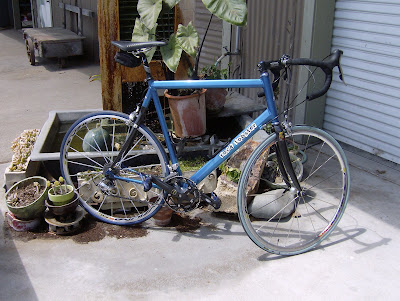 This is my brother-in-law's bike and he has macular degeneration and an no longer see well enough to ride the streets of NYC. It's an 'Al Carbon' with ultegra-10, mavic ksyrium wheelset and carbon fork,bars,crank,seatpost and bottle cages. It's a large frame for a 6'4" rider. All this for $ 2,000 obo, about half price. It's near mint and in perfect mechanical condition. 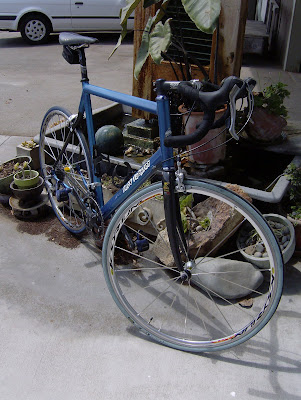 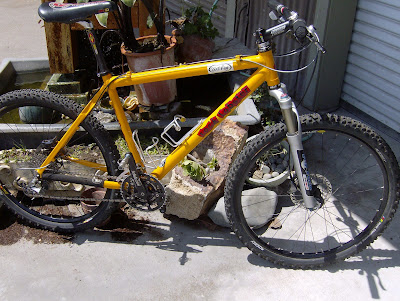 This bike used to be mine and it's about the nicest MTB I ever built up for myself. I only sold it because I was really broke.The frame is Easton 7005 ultralite and has a 17" seat tube c/c and a 22 3/4" top tube measured level. It's all XTR except for the Race Face crankset and the XT front hub. I built the wheels with 717 Mavic rims and DT butted black spokes. It has a Fox F-80RLT shock with pump and comes with two sets of pedals for only $ 1,900, less than half price and it's near mint. 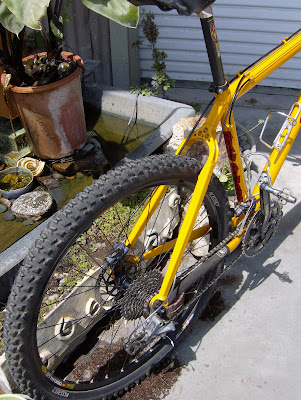 Posted by swiggco world at 4:43 PM No comments:

Rapha descends on the shop

These guys aren't just wearing styling threads, they are 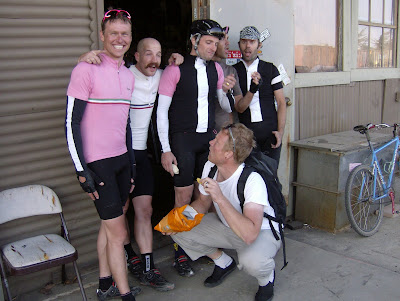 the company....well , on the road anyway. They are the folks from Rapha....if you like the jerseys ( and who wouldn't ?) look them up on the web. If you want to hear about thier travels, check out 'Rapha Continental' on the web. It's more than clothing and I wish I could tell you more. All I know is that these guys are putting in the miles and visiting shops like mine and telling the world about it on the web...the great rides and the crusty builders. They even brought their own photographer.-Like I said, it's more than the clothing , although the clothing could stand on its own, especially with 107 plus miles of sweat ! 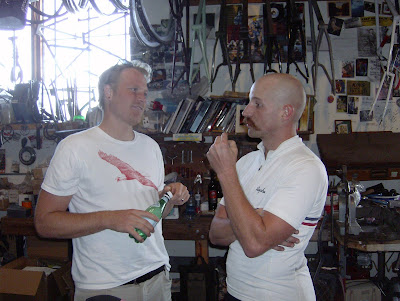 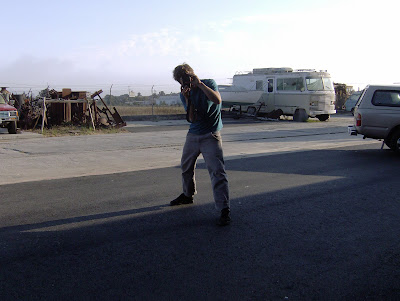 Posted by swiggco world at 8:37 AM No comments:

The rack is full again 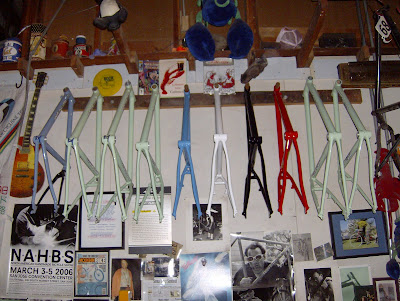 August is here and the new painter has finally belched forth the summer crop of new 'cross frames. What you see here is about one third of what I build in 'cross frames from June until November. There are still more at all three painters that I use, giving me the distinction of being able to build them faster than they can paint them. I wish it were the other way around as I do not like keeping folks waiting for thier frames. 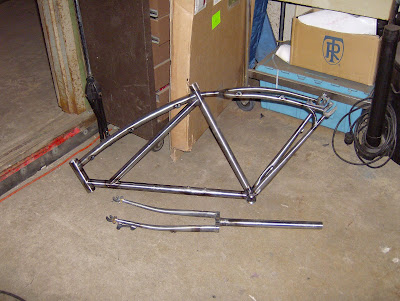 Lightning does strike twice, at least in this case. Two years later I build another Alfie but not for anyone in particular. The proceeds of the sale of this frame will go to breast cancer awareness. Shimano has asked five framebuilders to produce five frames that Shimano will equip with thier 'Alfine" line of components. The bikes will be displayed at Interbike and then be raffled off with all the proceeds going to 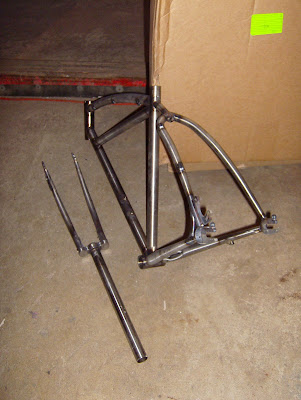 the aforementioned cause. This is one of the examples how occasionally a very large company in the bike buisiness will team up with the little guys to do something good. My hat is off to Shimano. 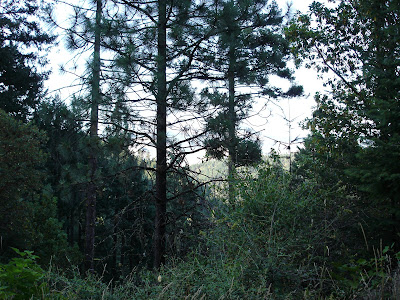 Here is a view through the trees on a smoky afternoon. I was up at about 5,000 ft. on the Lithia Loop fire road, kind of lost looking for singletrack. I did find some but double-flatted on the long fire road decent and wound up riding a rear flat for about seven miles. Good elevation and frustration training for the upcoming single speed worlds..... 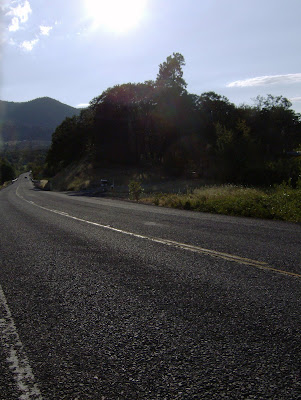 Most of the road rides were at twilight as the mid day was consumed with teaching the framebuilding class. Riding late had its advantages as the mid-day heat reached 95 degrees almost every day. Even at 6 pm I didn't see anyone breaking out a vest or even a long sleeve jersey. 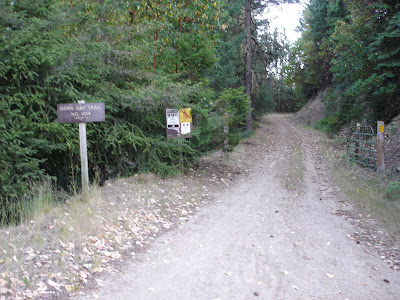 The Horn Gap trail.......after about eight grunting miles of climbing. I didn't see anyone on this road and I turned around not long after this as they were reporting black bears and cougars in the woods here. I don't think it would be good for me to get eaten before completing my teaching duties at UBI.
Posted by swiggco world at 8:01 AM No comments:

Riding in and around Ashland 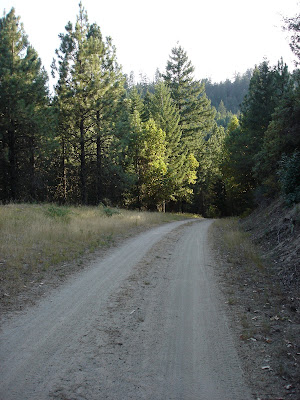 While I was up in Ashland in July I had a lot of free time after class and on weekends to explore the riding. Any ride in the area will require climbing and frequently I found myself above 5,000 feet , breathing a little harder than usual. The first picture is of a fire road decent from Horn Gap. On this road minutes from when I snapped the picture i hit a big rock and flatted both of my tires. I was carrying only one tube so I rode a rear flat on my single speed downhill about 7 miles back to my lodgings.....it pretty much sucked but it was riding, nevertheless. The second picture is of a bench near Horn Gap where I stopped, took a photo and turned around for the long downhill that I wound up riding on one good tire at about 10 mph. The next two rides pictured were on hwy. 66. I was able to con a couple of students onto my daily escapades and various riding misadventures during the two week stay in Ashland. Having company out on the open highway was a big plus. 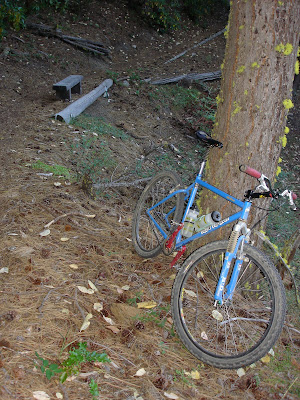 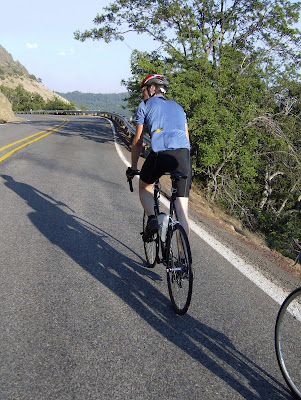 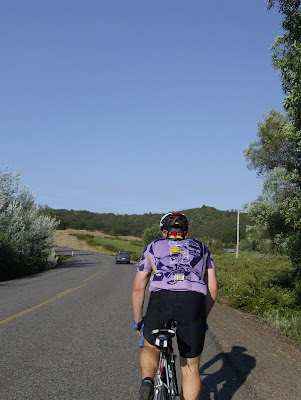