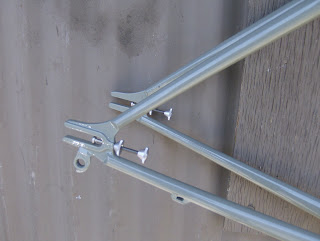 This frame seems to be part of a trend.....bikes that can either be run single speed or 1 x 9. The bike will have rim brakes....remember those ? 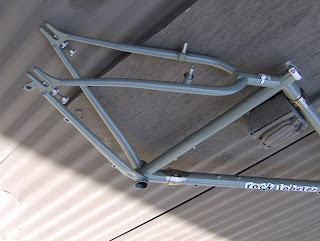 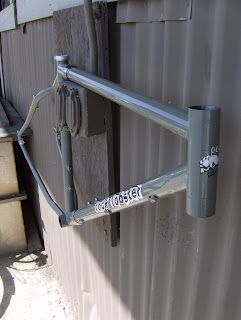 The S&S couplers indicate that this bike will spend some time airborne. Right now with the airlines charging a premium for bikes the upcharge for couplers is getting to look like a better deal. 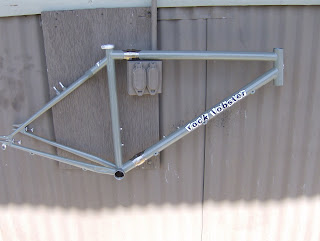 Posted by swiggco world at 6:33 PM No comments:

Sucka to the side I know you hate my ninety-eight... 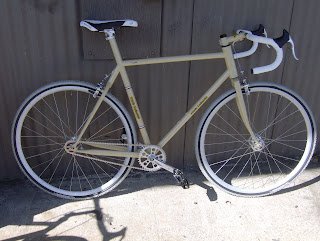 O.k. , maybe you suckas to the side don't hate my ninety-eight but it rides and looks hatefully good. I guess it wouldn't be the ride of choice to get you from South Central to Compton as it only has one speed , but it does have something close to white-walls and most definitely will not look like any otha sucka's ride out there. 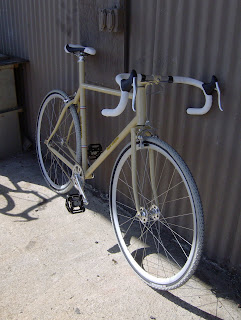 This is the first time I have ever built a frame for the Paul's braze-on Racer brakes. Paul Price contends that these are the best brakes he has ever produced.....I'll second that. They are absolutely buttery smooth but savagely powerful when you need it. They are probably the closest thing to hydraulic discs in a caliper brake. Even with my insane-in-the-membrane cable routing the brakes still feel good to the touch. 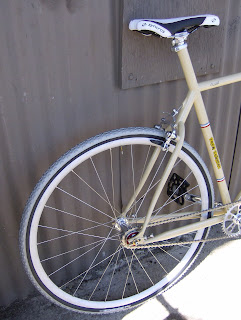 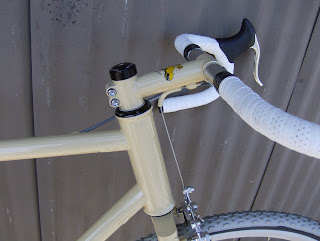 I had to build a stem.....the first of the year. The extention is made from the same tubing as the frame, NOS Tange ultimate extrastrong-a rifled relic from the early '90's that was some of the trickest and priciest tubing available. My good buddy Steve Garro of Coconino cycles was willing to part with some awhile ago. And if you are wondering....yes, that is internal cable routing for the rear brake and it exits out of the wishbone. Good luck finding any other framebuilder daft enough to do that one.........

Blast from the present

This bike looked like 1915 all over again except for the fact that I just finshed assembling it yesterday. This bike is a "path racer" or at least , a modern version of the '50's and '60's fixed-gear road training bike primarily used in the U.K. . A Path racer has more relaxed geometry than a velodrome bike and fittings for fenders and racks. This bike will see duty on some very long rides, most notably a route from Seattle to San Diego. Doing this on a fixed gear is a pretty daunting task but at least this bike has two gears to choose from. 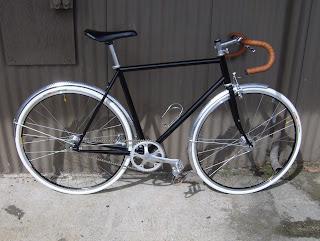 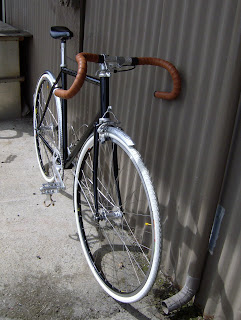 Yes, there is a front brake, a 'Racer" caliper from Paul Component Engineering. The matching lever is also from Paul's. 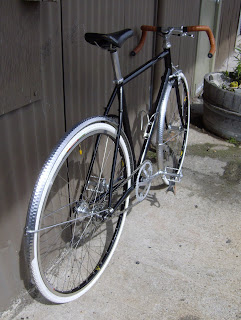 There is no provision for a rear brake , one just has to use thier legs. 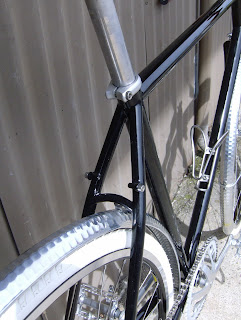 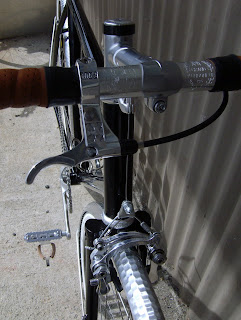 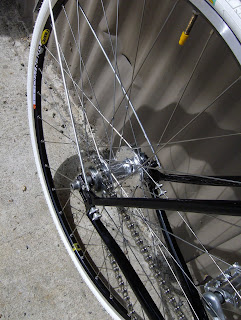 Posted by swiggco world at 6:10 PM No comments:

Alfie goes for a ride

If I had made this bike 1/2" bigger it wouldn't have fit in the bug. This wasn't why I made the bike the size it is, it was just a chance thing that the bike would fit fully assembled in the car.....but then again, this person knows the capacity of his car better than most. 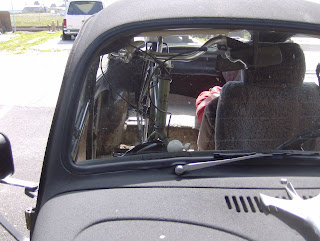 Maybe a bumper sticker reading " Alfie is my co-pilot" would be appropriate on this occasion..... 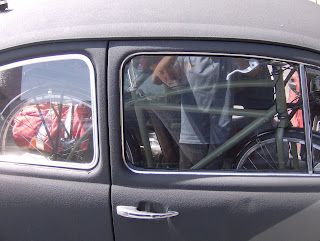 The gentleman who ordered this bike decided to forgo the shiny fenders and Brooks saddle that would normally be standard equipment on the Alfie. He also asked if I could make it a little lighter. I was able to do this by using lighter tubing and building a unicrown fork. This frame weighs ony 4 1/4" lbs. a full pound lighter than my own Alfie frame. I christened this model the Alfie 'S.L'. and figured that a single speed version could be build pretty light ,but having the 8-speeds is really nice. I put a large rear cog on for lower hill climbing gears, just in case the owner gets ambitious. This bike has the twist-shifter instead of the usual rapid-fire....I'm still dialing it in as this is the first one I have ever set up. 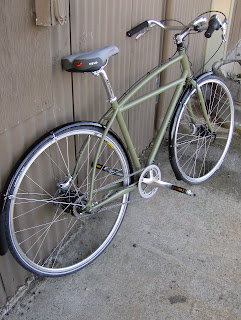 Omitting the wishbone seatstay dropped some weight from the frame. 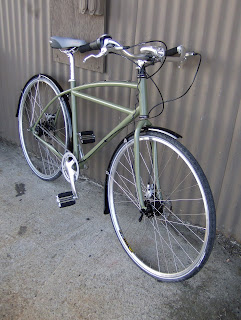 The unicrown fork is probably a good 1/4 lb. lighter than the standard flat crown fork that I build for these bikes. It's a welded fork with larger blades so it has a little firmer ride , not a bad thing for potholed street riding. 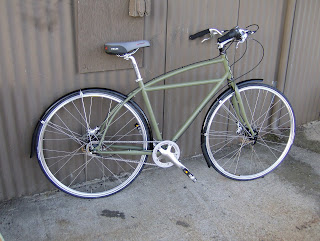 Posted by swiggco world at 6:53 PM No comments:

This Bud's not for you

Yes, you don't need to check your eyes and this isn't a dream. This, my friends is a genuine Budweiser bike and it is now in the hands of a team rider. Rumor has it that he's planning to hotrod this bike so it will go really fast.......err, maybe be useable for runs to and from places in about a one block radius. Maybe the bike once it has had the proposed modifications it can be re-branded the 'Bud Lite'. Hey, what's in your tank ? 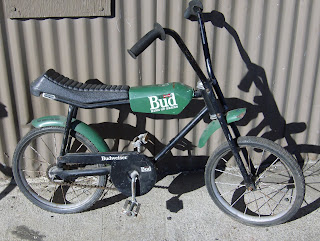 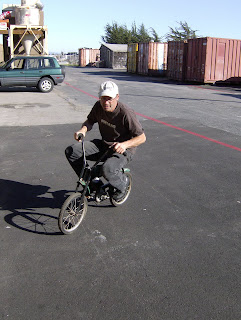 This bike is designed to be kind to the lower back but still be pretty sporty. The woman who owns this bike has an uphill commute to the local university. Every day will be an opportunity to see falcons, deer and the occsional bobcat in the fields next to the bike path. 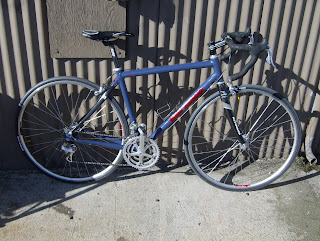 parts were taken from her old bike 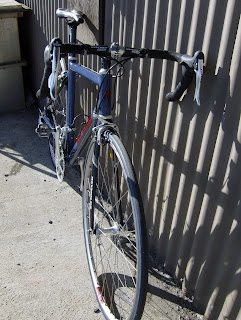 Most of the parts were on her old bike but the Campagnolo nine-speed gruppo integrated perfectly with the new frame. I was impressed how well these components worked in all respects. 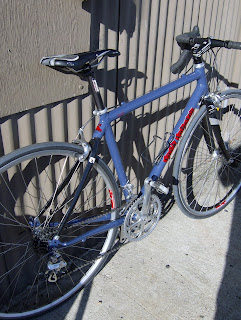 Posted by swiggco world at 6:27 PM No comments:

This is a 650 single-speed or rear der. only frame for rim brakes ( Paul Component Motolites) and to top it all off....S&S couplers. This unprecedented combination will go to Virginia and probably see a lot of miles in the air as well as on the ground. The tubeset is a combination of Reynolds 853 and 725 with the normal Dedaccai seat and head tubes that I use on almost every steel frame. Reynolds has a habit of not making the diameters of thier tubes to spec so I have to really become mr. precision machinest to make everything fit up correctly, which thankfully it did. I can send this one out knowing that without the tools and experience I have I would probably not be able to complete such a frame. I guess the years of hard work and throwing tools at the floor are paying off. 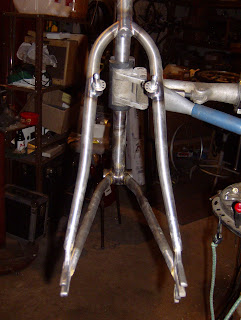 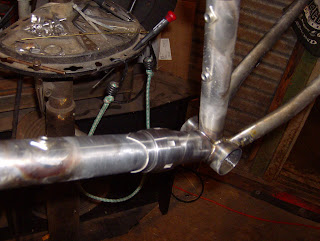 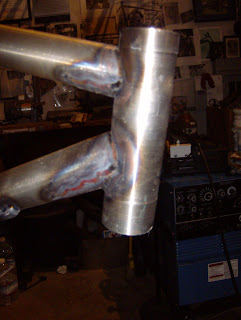