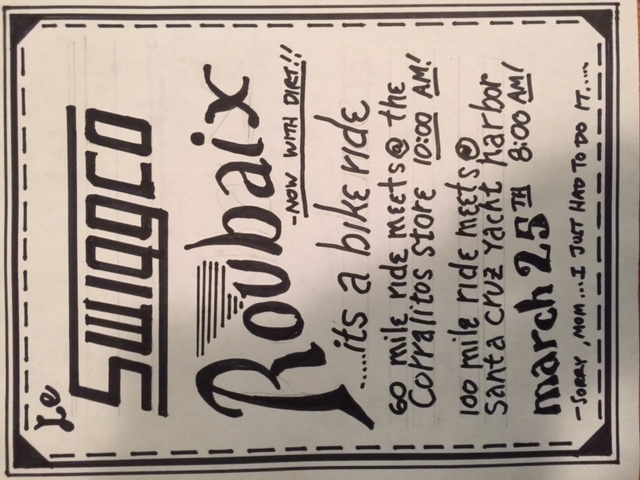 Here is the poster I made for the event. This ride was supposed to just be a team event but with most of the team unable to make the ride the invite went out to the bay area CX community and we had nearly 40riders. 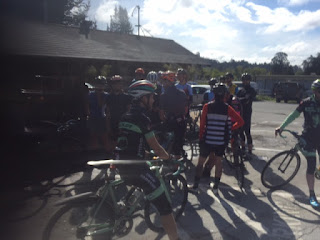 The bulk of the riders met at Corralitos for the 60 mile round trip to San Juan Bautista. Lots of different types of bikes were on hand. 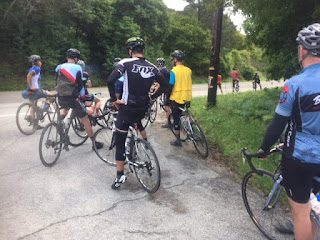 Here was a re-grouping spot after one of the days two flat tires. The sky threatened rain all day but not a drop fell. 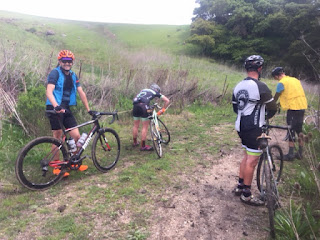 Going up the dirt climb the rains of the previous week made for a sticky muddy situation. About 3/4 of the way up folks were forced to carry their bikes and un-clog the areas around the brakes for the remaining climb. 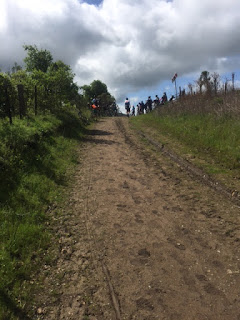 At the top we were treated to a great view before a screaming muddy downhill. Bikes got sideways in the slippery conditions and some of the bikes got clogged with mud again. 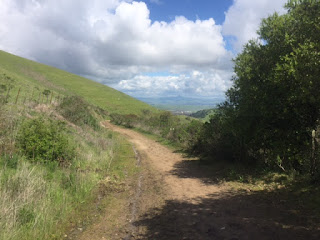 High above the lunch destination the sky was dramatic and the air was very clean. This was the highest point of the day. 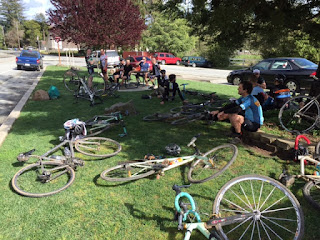 At the finish a barbeque was planned but instead the main course was beer. Lots of tired but happy people were in the park in front of Corralitos store. 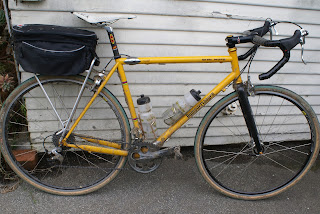 Here's my bike after the ride. It was a lot muddier at the top of the climb-Dumpstervaagen passed the test of mud, rocks and ruts. Maybe next year we will do another one of these-mixed terrain rides.
Posted by swiggco world at 10:35 AM No comments:

Aluminum CX frame for a local 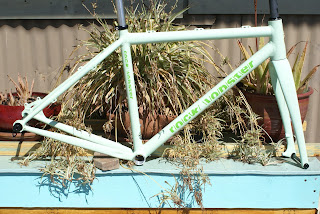 This frame and fork are for the guy who makes custom color decals for me when I need them in  a hurry. He made these green ones in a color I had not used-he can do that. The frame also sports the Jennifer Green silver head badge-unusual to put one on an aluminum frame but it works nicely. 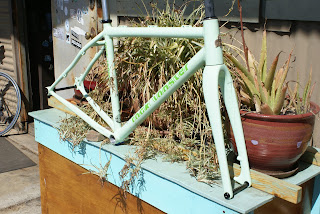 This frame is wedded to an Enve disc CX fork with a thru-axle, pretty much the standard item on my frames. To get the fork painted to match it will cost $ 150 , but it is a really nice touch and very popular. In the background you can see my travel bike which is being set up for a tour next month. More on that later. 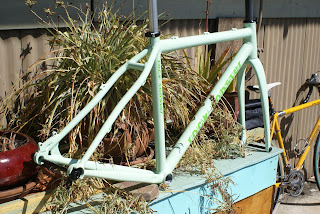 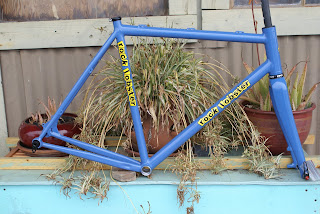 This frame and fork will be getting some serious use-room for big tires , thru-axles and a Whiskey # 9 fork with room for up to a 1.9" tire. Should be a fun ride. The classic original schoolbus yellow decals have been the staple on my bikes since 1984. 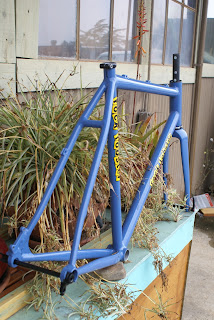 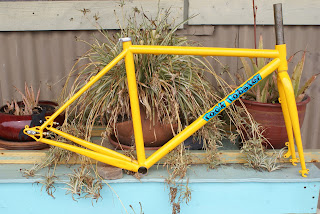 One of my favorite colors, this frame will see commute duty mostly . There's fittings for fenders and only one water bottle. This one is going to Boise where I have sold a number of frames over the years-there's kind of a small colony of them there. 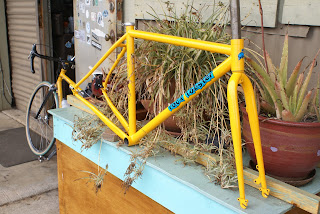 The Paragon sliders make the disc brake and chain tension setup very easy. It will be nice to see it all fully built. 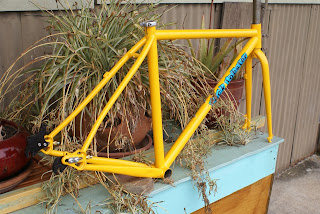 Posted by swiggco world at 8:20 AM No comments:

Track frame in steel for Colorado 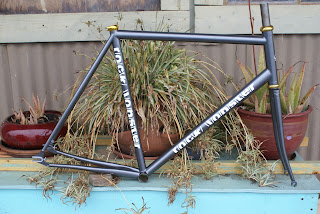 Yes, I do build track frames. I'm sure that I have built well over 50 of them in my career- most of them for the Jr. development program in the past that was run by Farid Abraham in Los Gatos, Ca. A lot of great riders came out of this program and some of my frames were ridden to district and national titles. 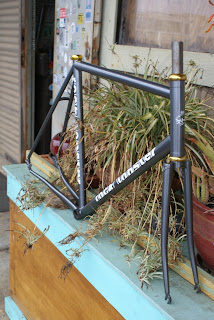 This frame is for a 21 year old rider who will hopefully be doing a full calendar of events on this machine. The steel frame and fork are my 'Mass start' platform for points race, miss-and-out and other non-pursuit events. The tubeset is very much the same that was developed for the juniors in Los Gatos back in the late '90's- True Temper S-3 mixed with some OX Platinum. 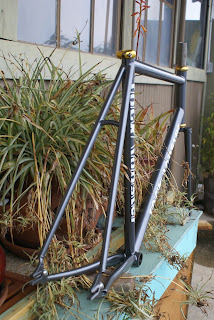 The chain stays are really heavy fork blades, bent and indented to allow the narrow q-factor of the track cranks.
Posted by swiggco world at 8:12 AM No comments: 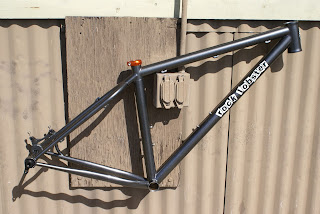 This will be the second of this type of frame I have built in the last 6 months. I anticipate that there should be an increasing demand for these as the wheel size is gaining popularity and the bigger tires are becoming more mainstream. 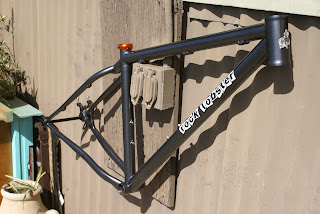 This steel frame is fitted with the oversize 30.9 ID seat tube for a dropper post and sports the sterling Jennifer Green head badge. This customer also has a single speed as well. The headset will be a mango Chris King inset-7 and the hubs will also be King in the same color. This is what people used to do with the aluminum bits on their bikes 15-20 years ago.  Cool to see someone doing it again. 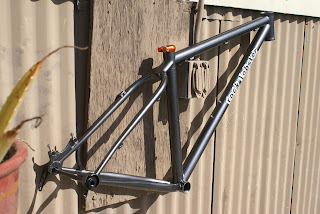 Posted by swiggco world at 8:49 AM No comments:

29er for SF in steel 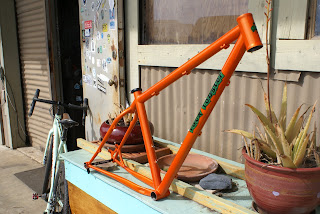 This one is about as current as I build. The seat tube has a port for a dropper post cable to be routed internally. The frame has the 'Syntace' rear dropout system-this is a first for me. It allows alignment of the rear wheel with a small cam built into the der. side dropout. A lot of other Nor-Cal builders have adopted this style of dropout. 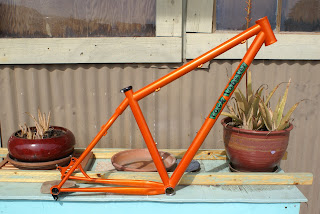 The color is a really deep sparkle orange with gold flek. It does not completely show in a photo. When the sun hits it the effect is pretty amazing. This frame will see duty on the trails and fire roads of the Bay area. I'm anxious to hear a ride report from the owner.
Posted by swiggco world at 8:43 AM No comments: 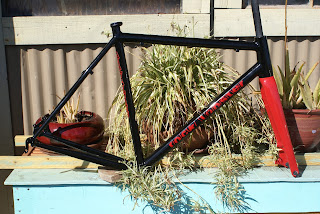 There seems to be a bit of a trend of people wanting the fork painted to match the decals. Here's a new example-an aluminum big tire CX frame mated to a carbon fork. No thru axles here but still made for disc brakes this bike will see duties out in the midwest. There are a myriad of paths and trails that snake in between the  towns that should provide a nearly endless amount of testing ground for this rig. 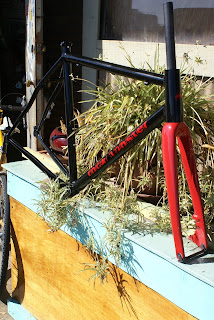 The head tube will house an integrated  Cane Creek 110 headset-a good choice for the harsh winter conditions. The aluminum tubes are Dedaccai 'Force' CX-the best that I have found for this type of bike. 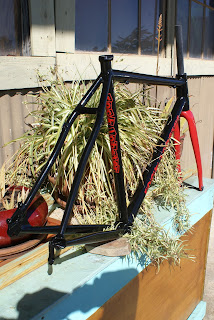 Posted by swiggco world at 8:35 AM No comments: