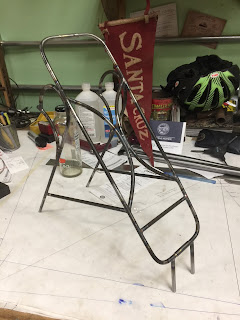 Yes, it has been 40 years since I built my first frame. What does one build after 40 years to commemorate four decades of putting bicycle frames together ? The sensible thing to do would be to build something I have never owned, so that's what you see here. It is a touring frame, fork and the frame has an integral rack. Correct, the rack is welded to the frame. Bad idea ? I don't see it that way. As long as this bike is mine it will be a dedicated light touring bike. I live in a relatively dry climate and will not be carrying that much on the bike- hence the light touring designation. That said, it is probable that I'll be doing some 90-100 mile days on it going from town to town. I have gotten back in to doing short 4-6 day tours after a couple of decades of concentrating on work and cyclocross. 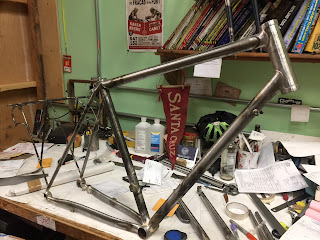 This bike will be fitted with 650x42 Pacenti tires. I bought the tires at least two years ago thinking that I wanted to try them. I did not have a bike suitable until now. My goal with this bike is to build it up and have it and a few others on display at NAHBS in Sacramento this coming March. Of course, I could just blow off the show and go on an extended bike tour but since I have already paid for the booth I guess I had better show up. I do want people to see this frame as it shows off just about every skill I have as a bike builder. Some of the frame features make me proud......some of them maybe not as much. When I got to building the fork I did get a bit impatient. I'm hoping that some skilled work by the painter will make it all look seamless and good. I am proud of the lugs- they are not all that special but they were given a good deal of attention with the files . I'll let the people be the final judge of my work- that said, the lug shorelines will be the furthest thing from my mind when I get on this bike and start riding south.....or north. 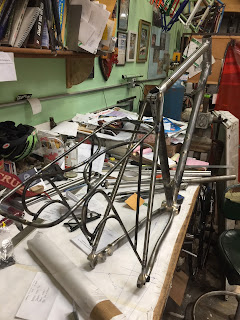 In short, this is a pretty odd build- 650 wheels, integral rack, flat mount disc brakes, lugs with a fillett brazed BB, sloping top tube, 12 mm thru-axles front and rear. Something tells me that there won't be another one like it at the show. The combination of old and new is sure to make some folks scratch their heads and think that the builder is a bit nuts. -I'm fine with that. Nobody has to understand it except me. After 40 years, this made sense to me. It will have a use. If it didn't it most likely would have not existed.I would like to thank two former builders for a bit of inspiration and materials:
Michael Knepp for the cool fork crown
Bruce Gordon for his collection of riffler files
Mitch Pryor.....he was next to me at the last show and I got to see his touring bike- inspirational 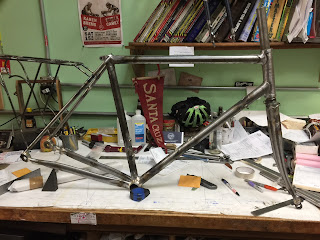 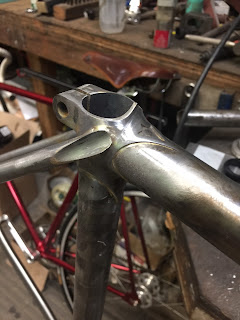 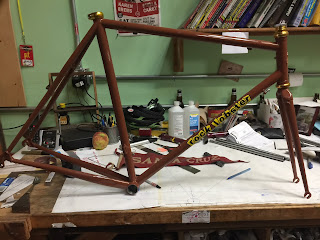 This is not an older frame but one I just shipped out this week. The customer requested smaller diameter tubes and a threaded fork. I had to make some calls to get the gold headset but here's the result- a tig welded steel frame that is below 4 lbs. with a look that was popular about 25 years ago. The bike will have modern components and will be in Kansas by the end of the week. 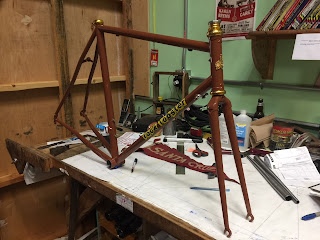 This fork crown is the same one I used on countless builds back in the late '90's. The brake bridge is also a popular one from that era. I had a nice time building this one, even if the sourcing for some of the bits got a little difficult. It all came together- the only thing I could not get was a gold top nut for the headset. I had to go with silver but the gold Jen Green headbadge makes up for that. 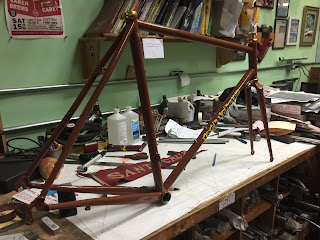 Posted by swiggco world at 8:16 AM No comments: 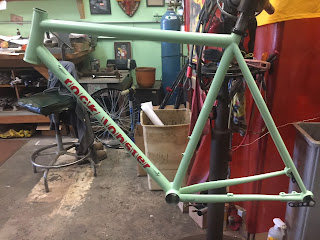 This steel frame will be going to a long established shop in Boise. The flat-mount is paired with an internal route on the down tube. This setup is getting to be a popular feature as it eliminates all guides from the top tube on a single speed frame. Di II frames look pretty much the same and I'll be displaying one in aluminum at the upcoming handbuilt bike show in Sacramento early next year. 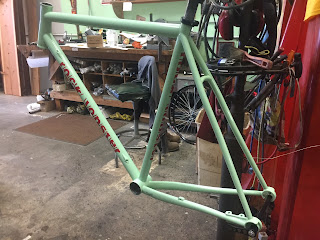 The team color paired with the red decals is identical to my own bike- I really like the combination of colors. 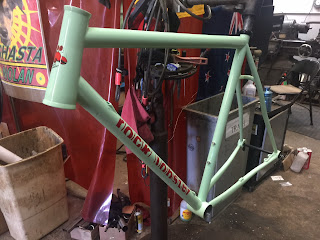 Posted by swiggco world at 8:50 AM No comments: 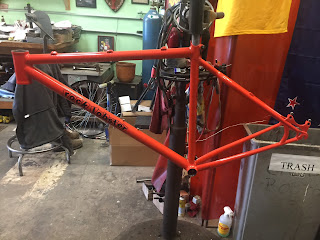 The fellow who owns this frame used to ride it frequently  in the Santa Cruz mountains. Somewhere along the line the bike got mothballed in the garage as the non-suspension design was not suited to a much older rider. This model was the 'team-issue fillet' with un-filed bronze fillet brazed joints.I probably made about 150-200 of these before I switched to tig welding. I have owned a few myself and bought back one from 1987, single speed # 1. This frame is one of the last examples of the style before I went fully into welding. 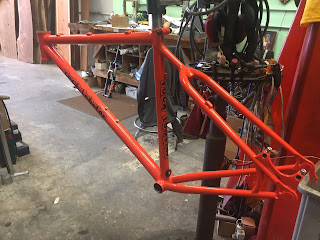 The owner has a very strong sentimental attachment to the frame and wanted to continue riding it. Things are different now as he is a grandfather and wants to ride the bike with his grandchildren. The rigid fork and super aggressive handlebar position had to go. I told him that making the bike able to use a modern fork would require replacing the front end of the frame. He said " Go for it, otherwise I will probably not have a use for the bike." Mountain bike collectors might frown on doing this type of re-build and I'm not that keen on it myself but the sincerity of the customer won me over. He is not likely to ever sell the bike but would rather pass it on to a grandchild. 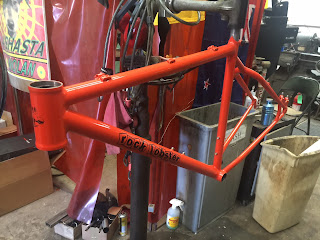 Now the frame is made to take a 140 MM fork- it still runs 26" wheels but will now accept disc brakes. It is still built with the same method, unfiled fillets. The whole job cost less than half of what a new frame would run so according to the customer it was the right path to take. This was one for the books- I'm glad a local who has been riding the trails around here nearly as long as I will keep riding his old bike again.
Posted by swiggco world at 8:43 AM No comments: