An old project comes back to the shop 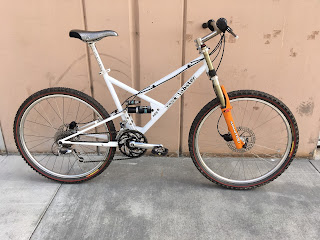 Yes, this is indeed a full suspension frame that I built nearly 20 years ago. It was in collaboration with Mike Ahrens who to this day produces many of the aluminum parts that I and other builders use for frame construction. Little did I know when I built this and other bikes with Mike that it would lead to an association that would last more than two decades. 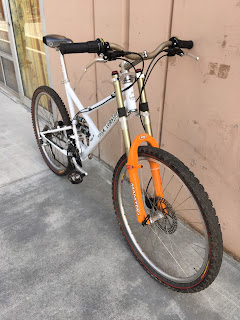 For a time while Mike was in college he worked for Risse racing. For a senior project Mike got the idea to build a full suspension mountain bike-this was around 1997. Mike approached me about making the frame and I agreed to do it. After the initial frame we went on to make about another 10-15 frames together of this design , more or less. I also built some hard tails and other frames for Mike as did Jason Grove. 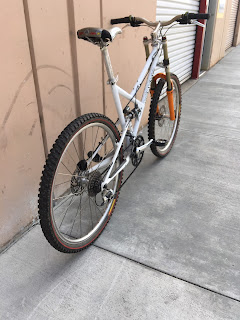 This particular bike wound up at MOMBAT at First Flight bicycles in Statesville, NC. When the MOMBAT collection was to be sold off one of the employees of Santa Cruz bikes bought this bike and it is now back in Santa Cruz. For most of its life this bike was a display item. Now it looks like it will finally do some time on the trails in the redwoods where the inspiration for many mountain bikes happened back in the early '80's.
2019 has been the year were old projects such as this have re-surfaced and come back to my shop . So far I have seen bikes from the very early years of my history and ones like this-while not the oldest, represent a time when I was willing to take on more adventurous work-a time when mountain bikes were in the middle of an evolution.......it was an evolution that I mostly stayed out of with this exception and maybe one other. The good thing about building this and other bikes with Mike is that I wound up with a very important ally for building aluminum frames and a good friend in Mike Ahrens. He has evolved into a behind the scenes person who drives the forward progress of frame building supplies for aluminum builders everywhere.
Posted by swiggco world at 8:25 AM 1 comment: 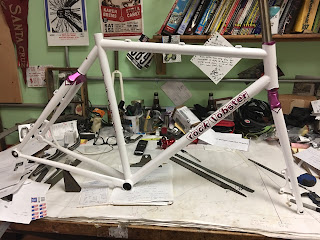 This steel big-tire CX frame and fork has a unique feature of having a fork crown to make the seatstay wishbone. I have never done one like before. This design was a request from the customer, right down to the paint accents. The frame has an older look but set up for modern components. 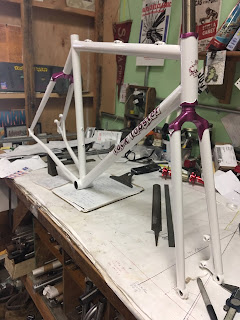 This really isn't a pure retro frame but something with a retro look that will have thru-axles and disc brakes. I'm interested to hear how it performs out on the trails. 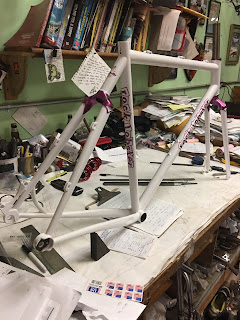