somewhere, under the rainbow

Where is this? This is where I live-it's where I ride when I can make the time. I'm sure that most people who will look at these pictures and read about this place will never visit it in person but at least this way I can show it to you a bit at a time. These photos were shot on a ride that took about an hour and twenty minutes, including the time to stop and take a few photos along the way. 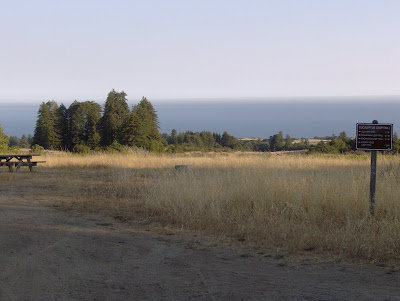 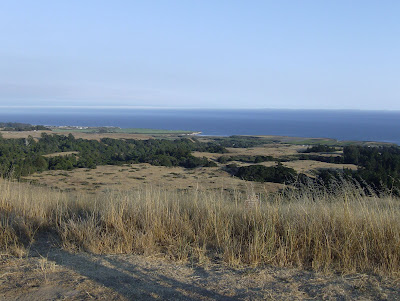 This is the bluff just above route one north of town about two miles. The buildings on the left near the ocean are Long's marine labs. The fields near the ocean grow brussel sprouts. 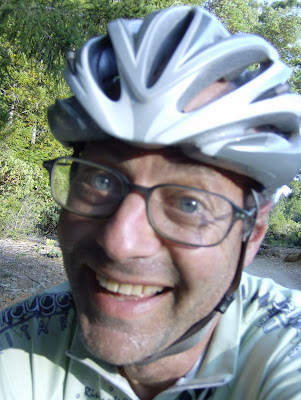 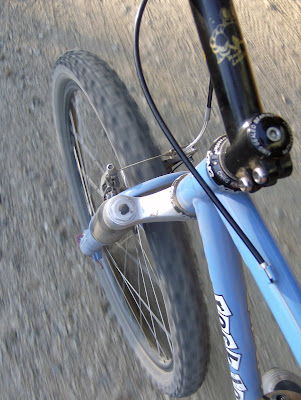 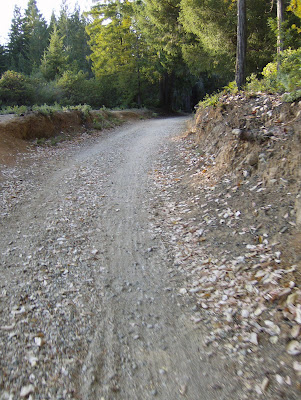 I didn't even stop rolling taking these photos of the fire roads behind the U.C. Santa Cruz campus. 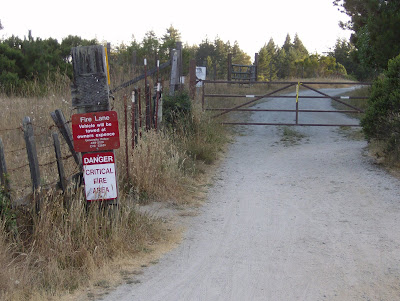 Riding after work makes this framebuilder happy indeed. What makes me unhappy are the bozos that start all the fires with cigarettes and general carelessness.These signs are truthful as this forest could go up at any time if someone just flicked a butt out the car window. The air has been smoky enough for the health department to recommend not exercising outdoors.....I didn't pay attention to the warnings-hopefully my lungs aren't black. Fortunately, today was clearer and the fires are getting smaller . 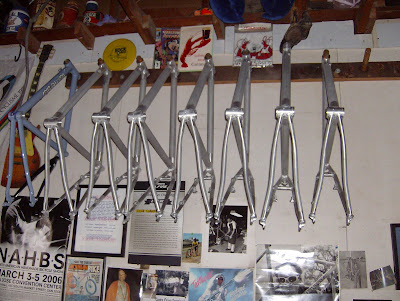 Can you feel it? "cross eason is almost here. It might as well be here now as I have been building the run of team frames before I head off for UBI and the tig steel framebuilding class I am to teach. Am I scared? Definitely. Do I know how to weld ? Yes, that is pretty much certain. What about the folks depending on me for proper instruction....we shall see 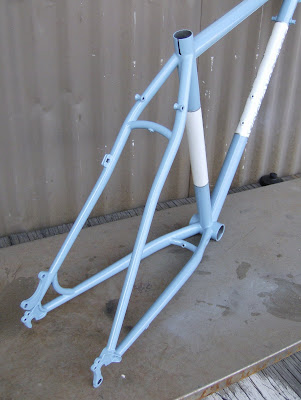 Here's a frame bound for Oregon, replete with noce panels, swoopy stays and the capacity for serious third world roads. 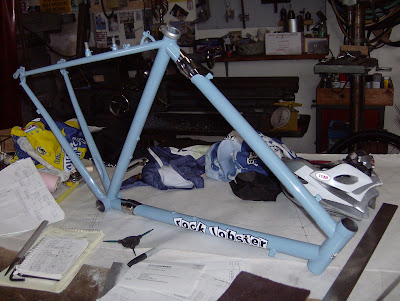 Another touring/cross frame bound for Washington state with S&S couplers. 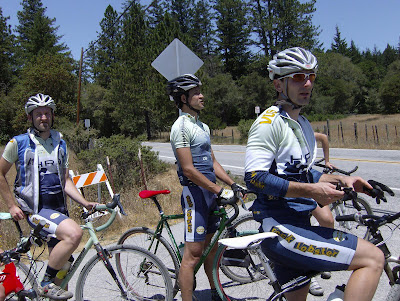 Unless you were here. The team by and large came together for a ride and feast that coincided with a visit from Simon . Since leaving Santa Cruz almost a year ago Simon has found a new life in Bishop that is far removed from the cycling scene - nevertheless ,the withering pace of the ride wasn't too much him even over-geared on his single speed cross bike. Simon's friend Hallie didn't participate in the ride but did get to meet everybody at the feast. 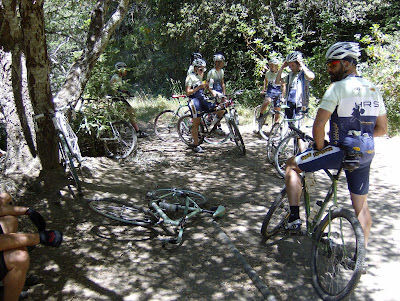 Back to the ride......the long line of HRS jerseys going along the bluffs and up into the hills was something to see. Unfortunately I was not able to capture this as I was fully comitted to grunting up the hill and not getting left too far behind. I was only able to take photos when the group was at a stop. With almost 20 riders we entered Wilder Ranch almost like an invasion. When we were up at the UCSC campus we got some odd looks and questions from students: " Are you on a marathon ?" 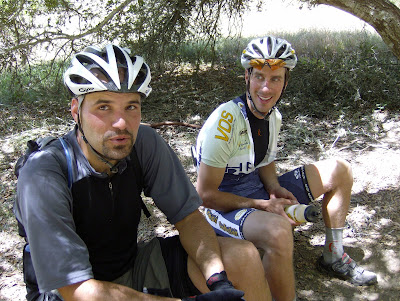 Other than some really gross food stories and a couple of flat tires the great weather and newly groomed trails made for a super pre-season ride with more than half the participants on 'cross bikes. 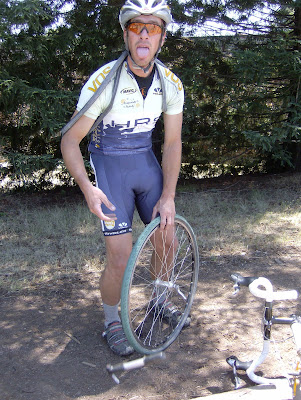 After the ride we were treated to a metric ton of finger food and one of Stella Carey's masterpice cakes, this one being a banana split cake.......good source of potassium after the ride and delicious as well.
Today Simon and Hallie are off to Sonoma so it will be awhile before we see Simon again but this was a great event and a good time for the many who made it. 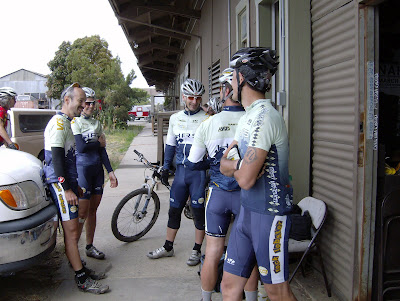 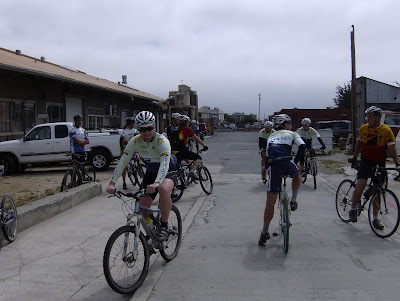 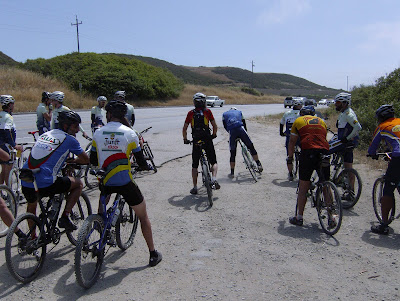 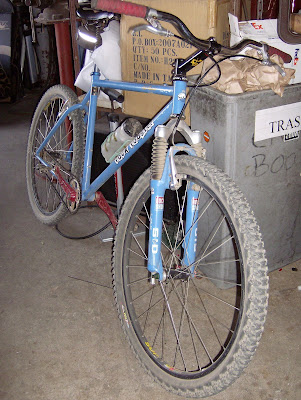 Yes, it's 9 years old and everybody has seen it too many times but today I really enjoyed the old single speed just like it was a new bike, only more because I didn't have to worry about scratching it or having to make any new-bike adjustments. All I did was lube the chain, fill the bottle and ride. Yes, that is dust on the bike....I really don't ride it enough-some times it's on a hook for a year or more but this year I am going to return to the fundamentals and spend the summer re-discovering what one gear can give in terms of enjoyment,challenge and simplicity. Now that it has been 21 years since I build my first single speed I figure that the bike is viable, even if it hibernates a lot. I have thoughts occasionally about building a new super modern S/S with disc brakes, Scandium tubing and all sorts of fancy bits but every time I ride this old bike I forget about the whole notion.....if it ain't broken.....

Posted by swiggco world at 7:56 PM No comments: 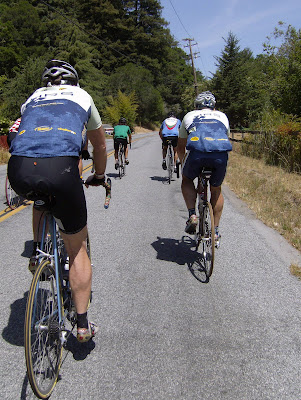 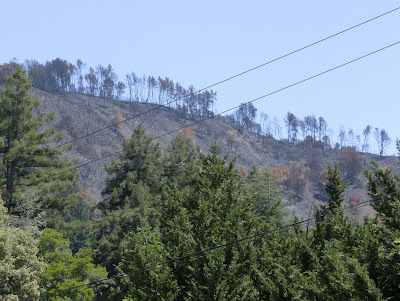 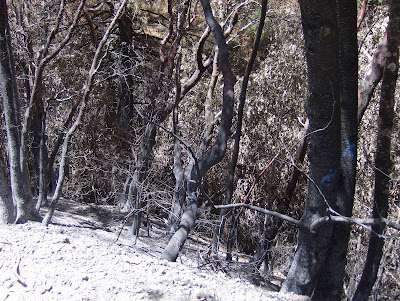 In case you don't live in the area, California is prone to wildfires. We had a sizeable one a couple of weeks ago that burnt 4,000 acres and more than 30 homes. Today we went up to the region where the fire had been.
Posted by swiggco world at 2:50 PM 1 comment:

two new ones out the door 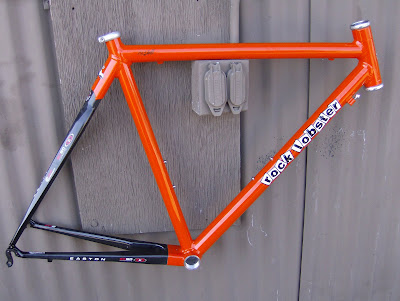 This is a traditional team carbon 7005 frame bound for upstate New York. This is a modern frame in terms of materials executed in an earlier style, similar to Miguel Indurain's Pinarello that he rode to victory in the Tour in 1995. Rumor has it that the legendary bike was built by Dario Pegoretti. 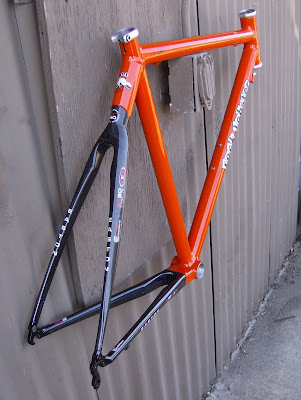 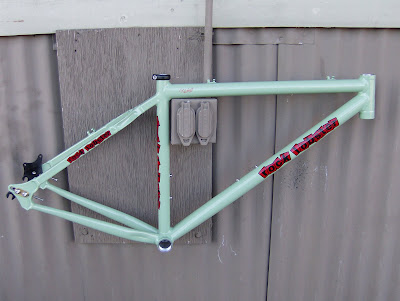 Here is A.K.'s 7005 UL. single speed and here is A.K. himself leaving with frame in hand, no doubt to give it a good testing on the trails of the Santa Cruz mountains and elsewhere. 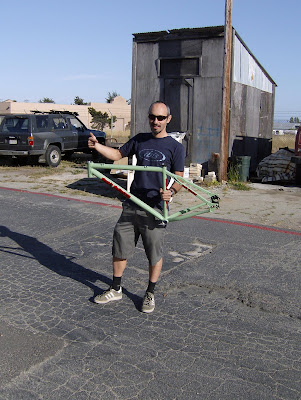 Posted by swiggco world at 6:26 PM No comments: