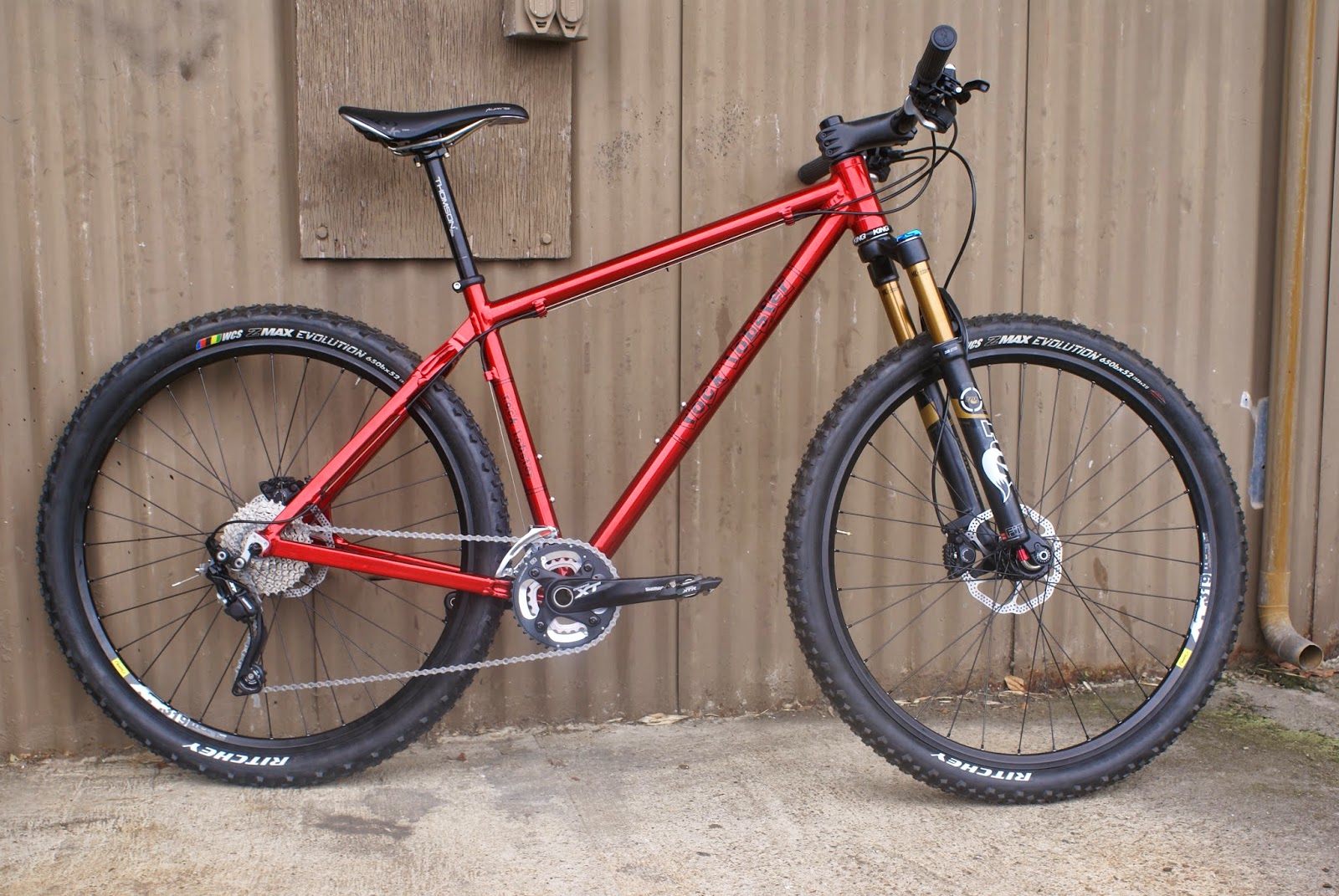 The owner of this bike will be riding some remote parts of the Rockies near Boulder. He's a young 71 years old and can probably drop you on a hilly ride. I hope that this bike fits the bill for him and does not hold him back. 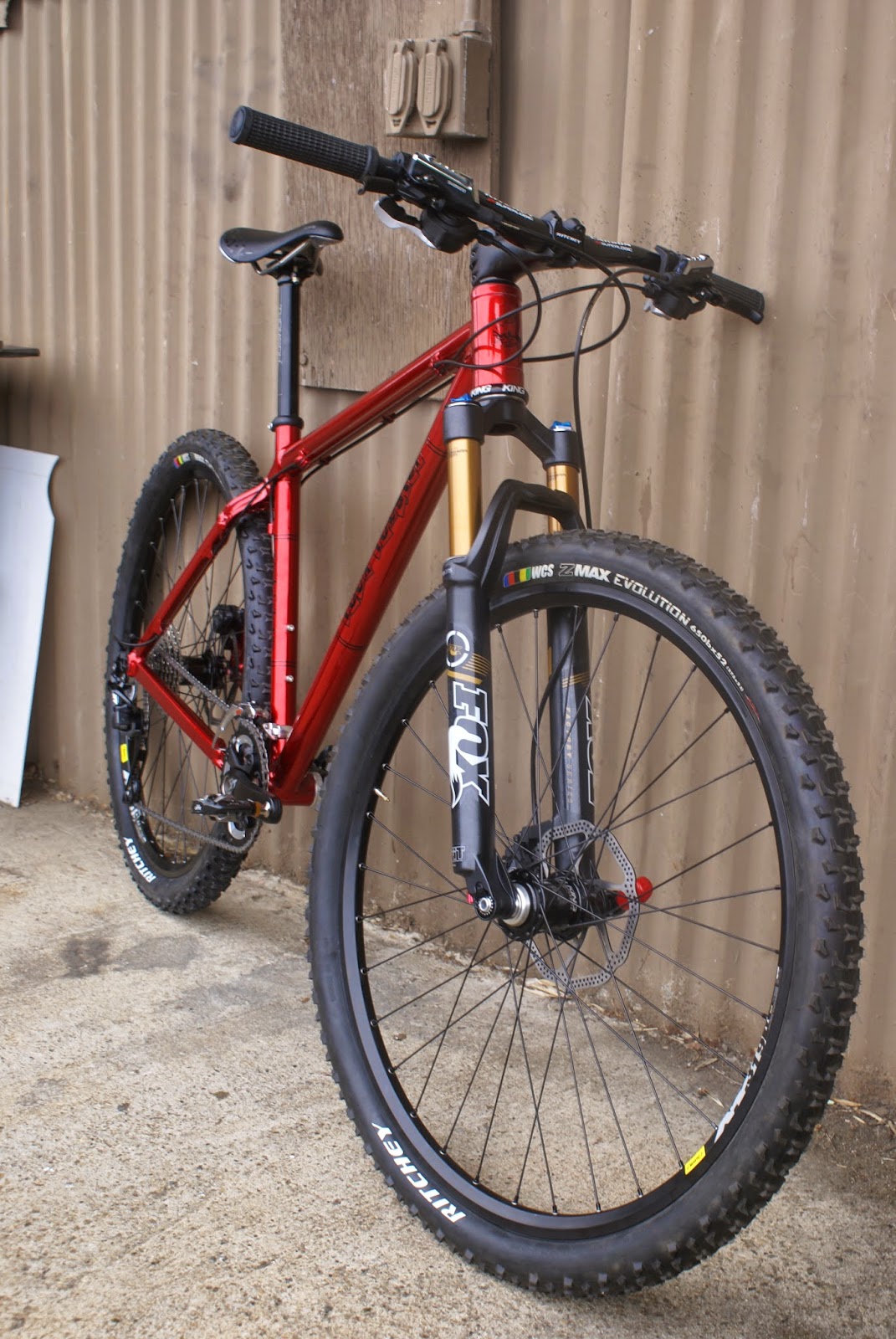 The frame is mostly Easton elite NOS US made tubes with some Fairing 7005 chainstays. The fork has a tapered steerer and the parts are all XT except for the King hubs. The wheels were built in house with Mavic 319 rims and blakc DT competition butted spokes. 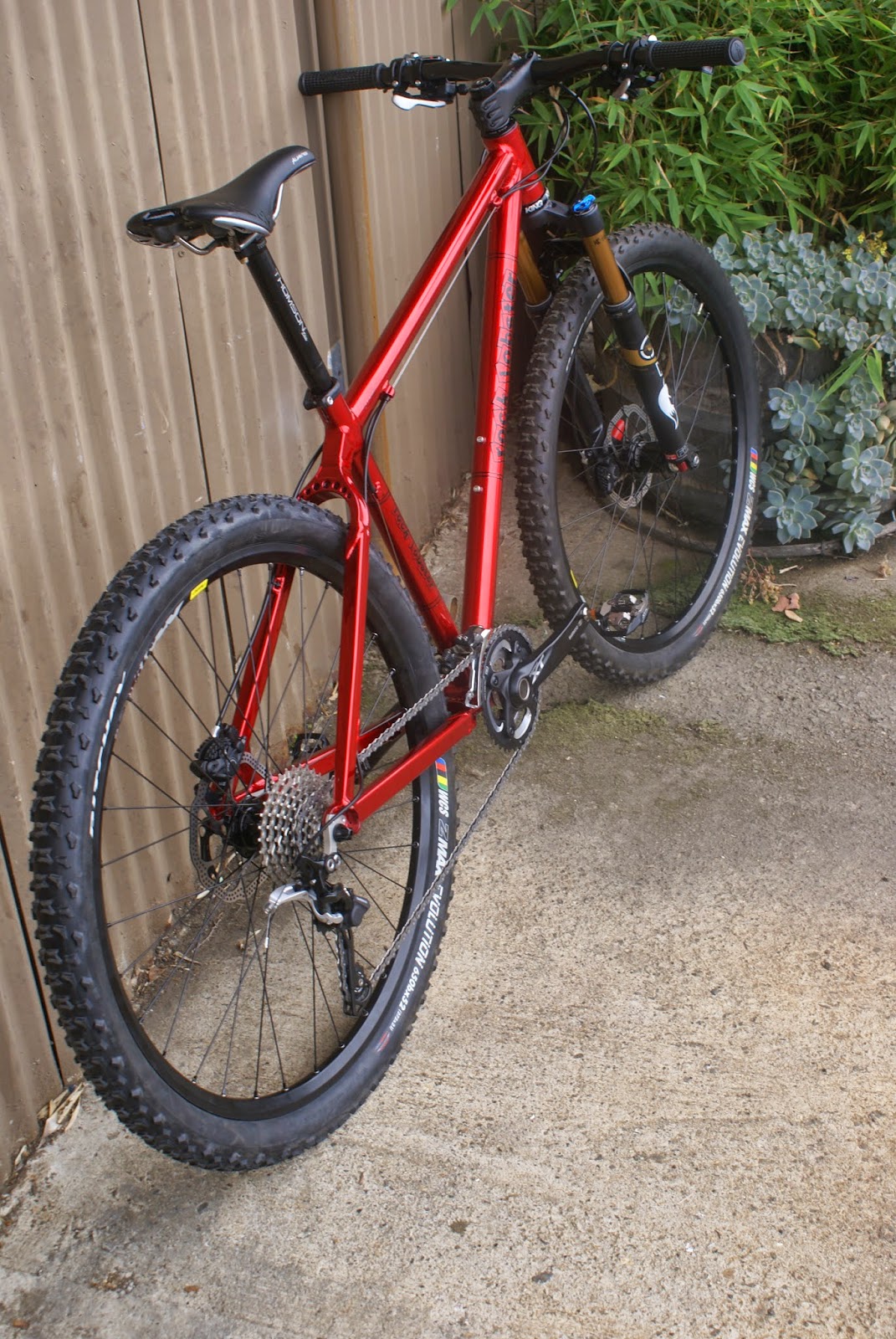 Posted by swiggco world at 5:50 PM No comments: 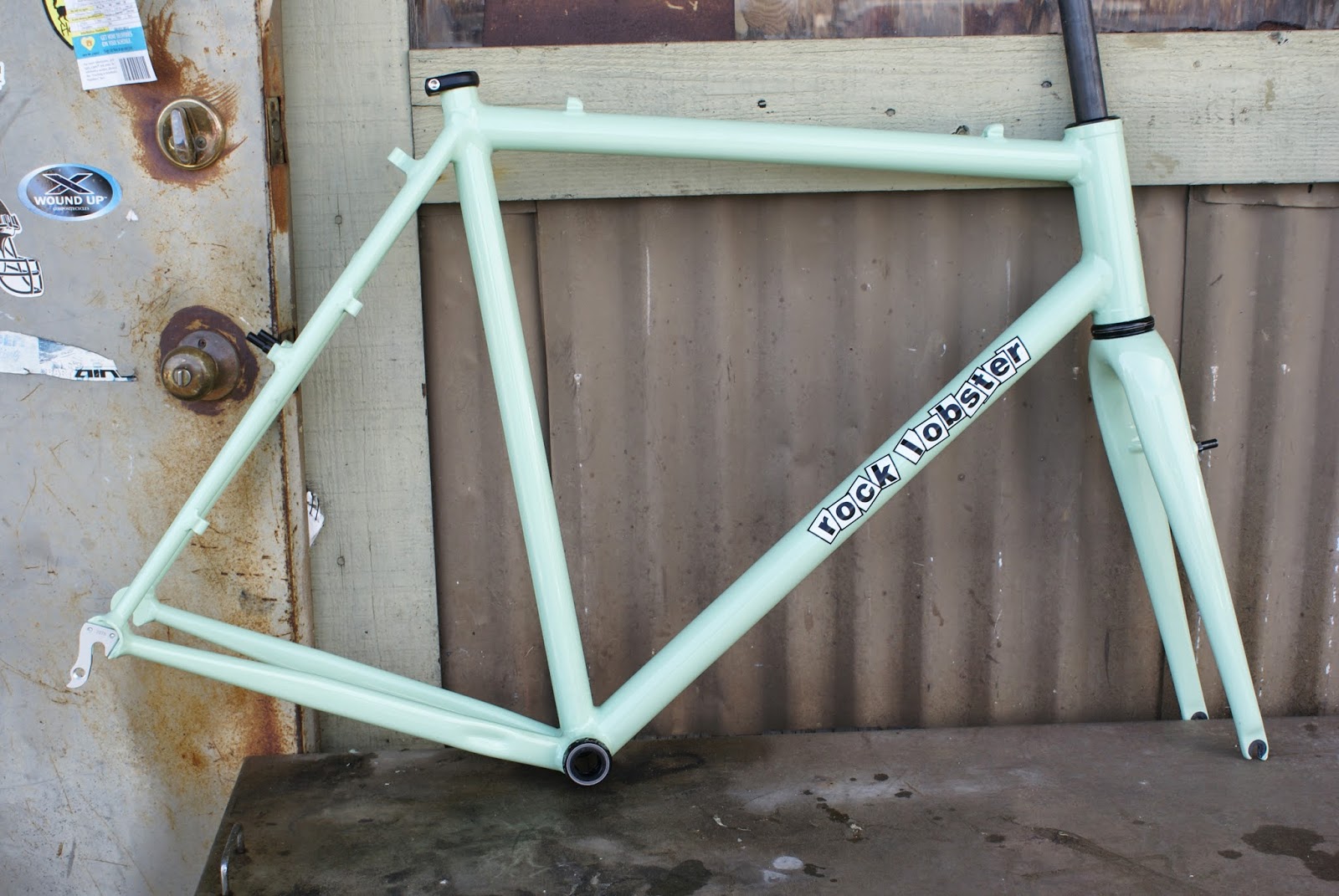 This customer has been waiting a long time for this one-I hope that it comes up to his expectations. 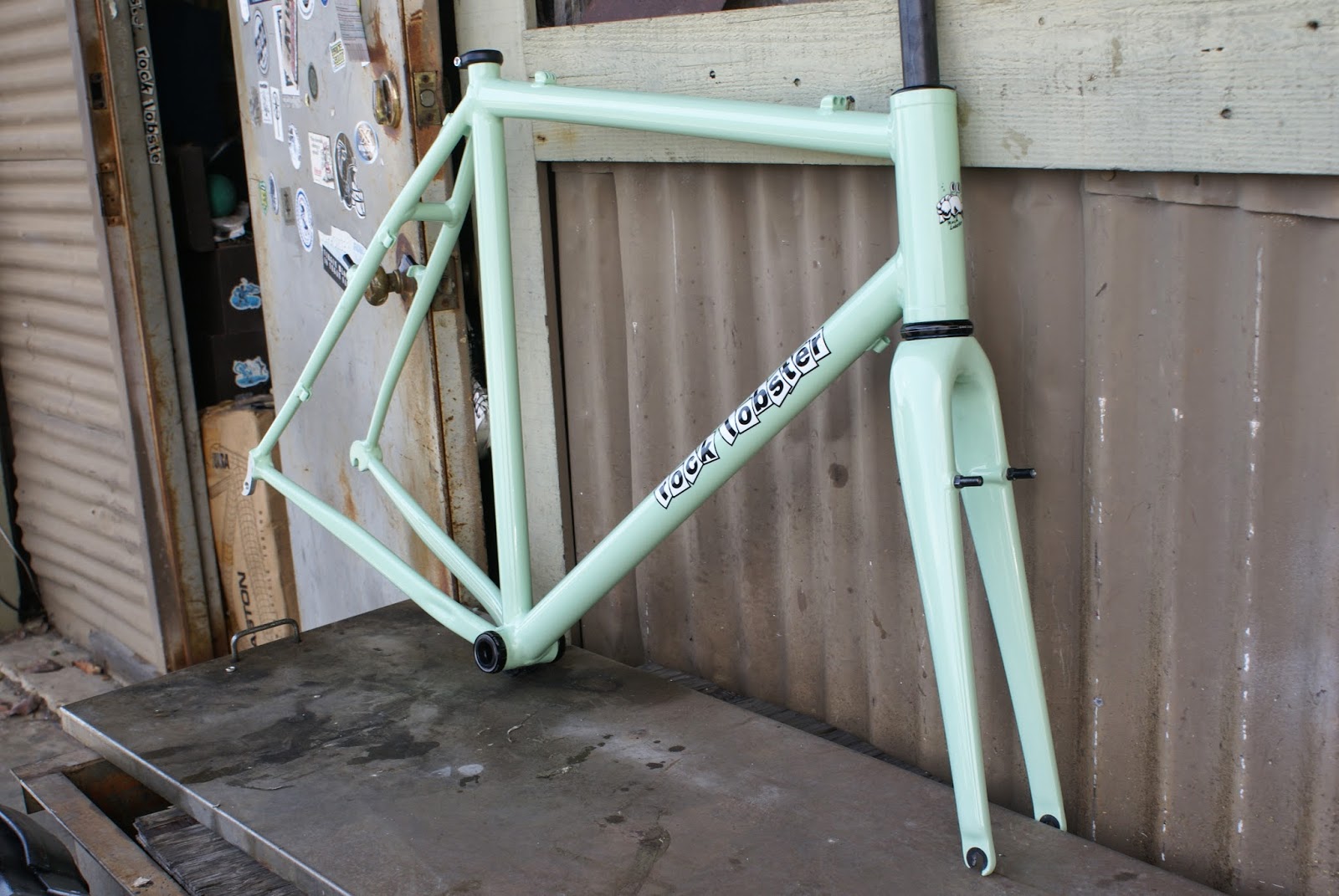 Getting the fork painted to match is a really nice touch-almost makes it look like I built the fork-of course, I didn't.....it is a carbon Enve cross fork. 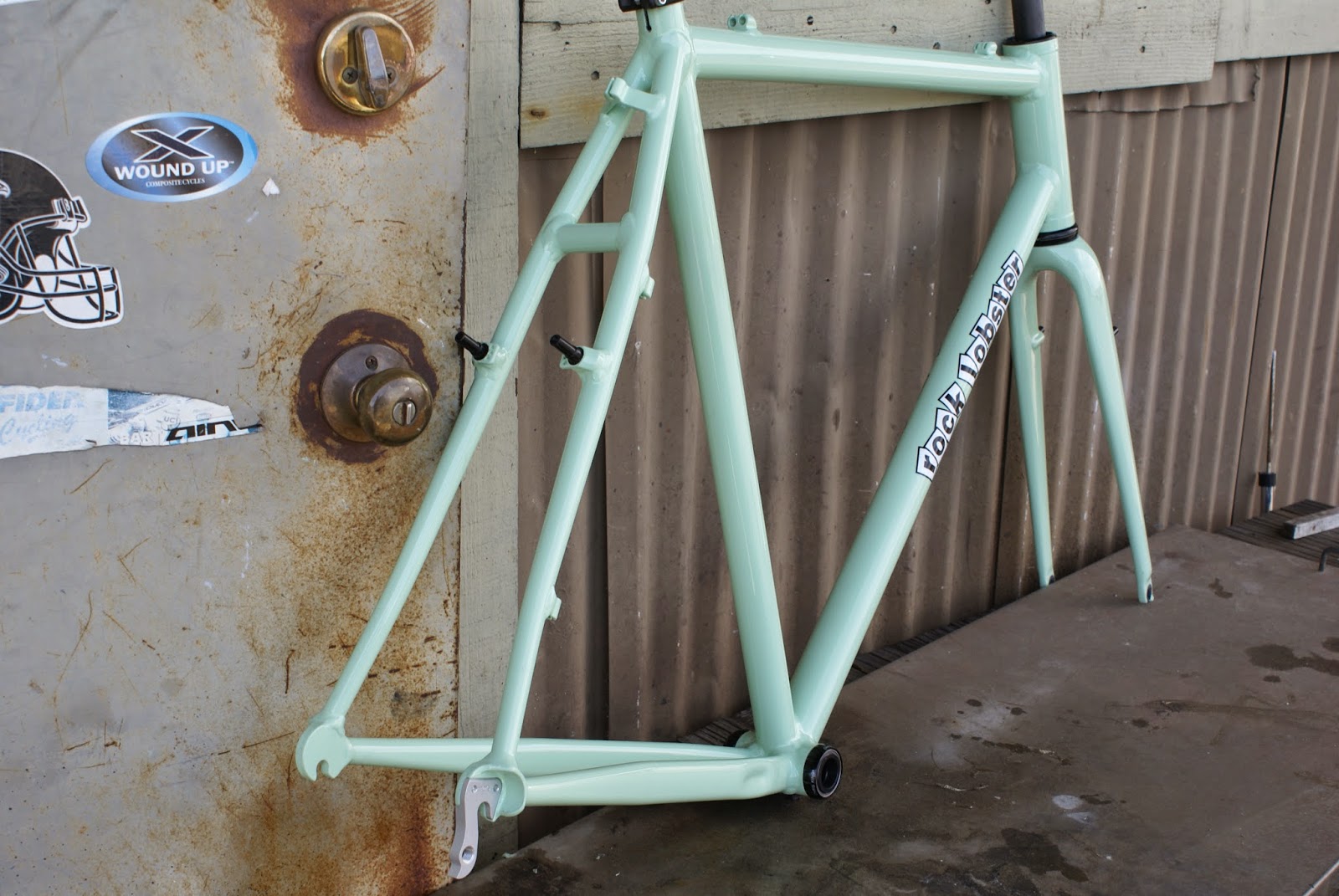 This customer is eschewing disc brakes in favor of traditional cantilever brakes. If they were good enough for the last 60-odd years, they are good enough now.
Posted by swiggco world at 7:16 PM No comments:

Birth of a new bike 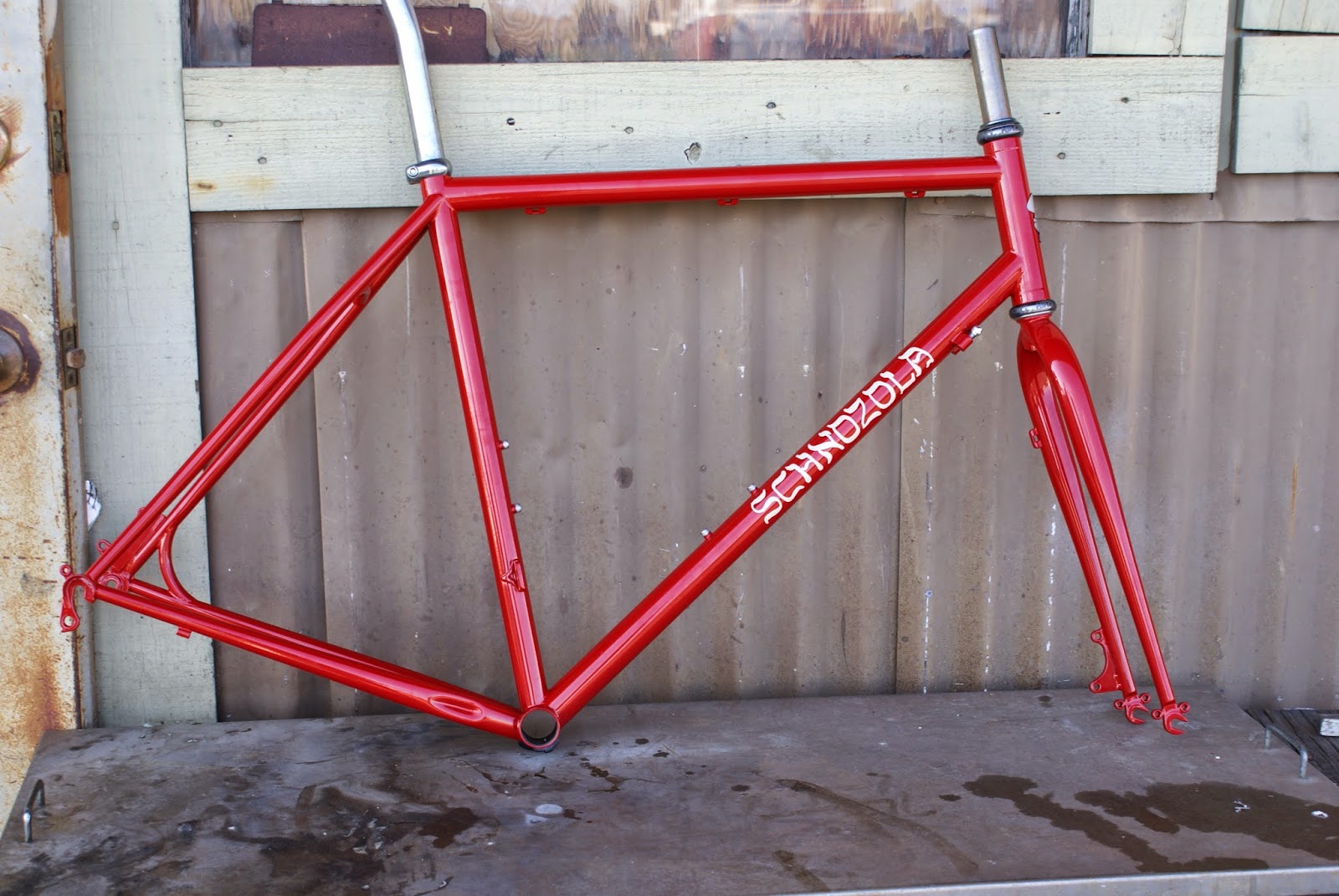 This frame and fork will be built into a complete bike for a friend of mine. The frame is a result of a collaboration between myself and Bruce Gordon. Our combined years of building is somewhere around 70-plus years so this collaboration is unique in that respect. The frame will take up to a 700x43 tire-Bruce designed and sells this particular tire called "Rock 'n road", an all conditions high quality tread . 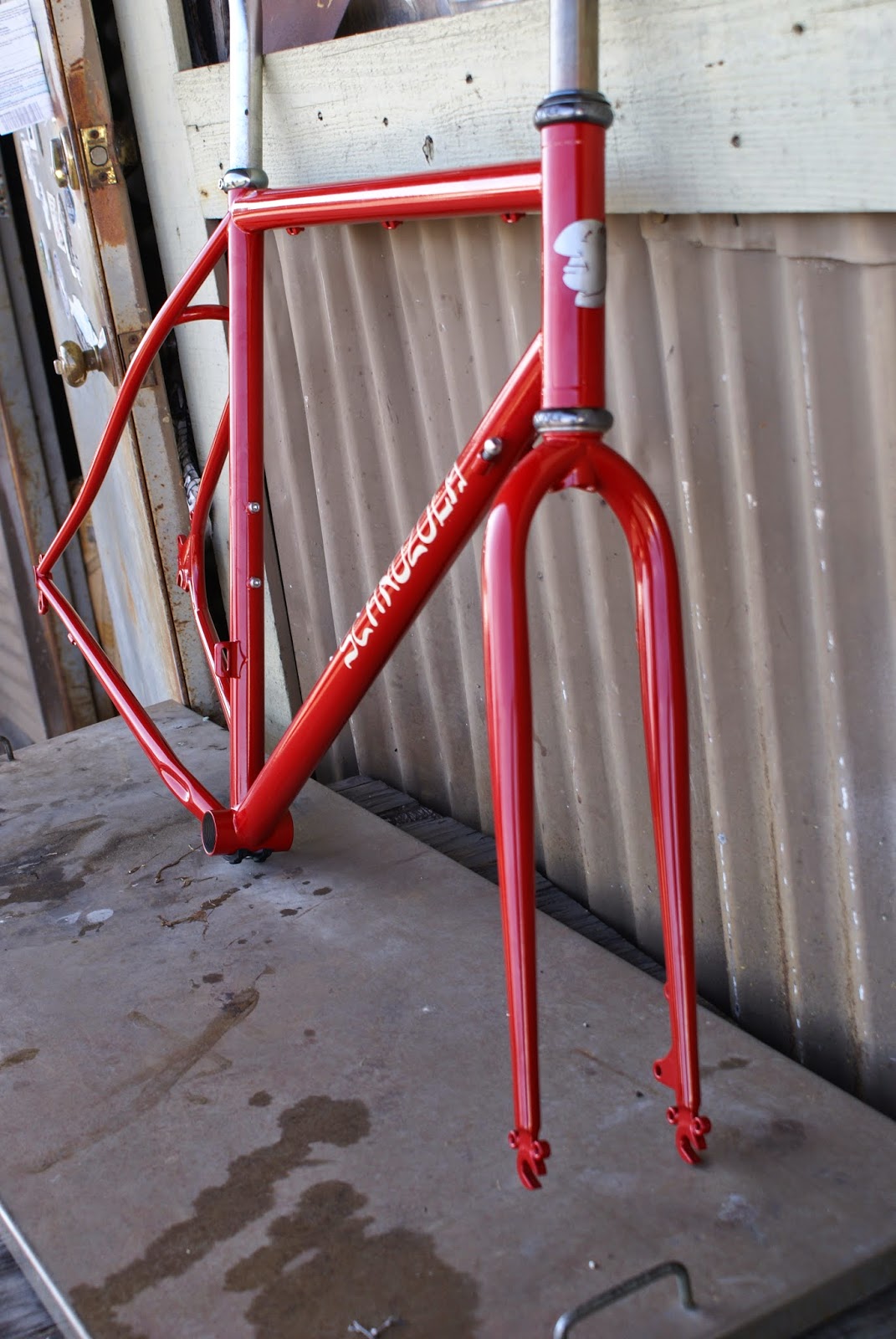 These will be sold as complete bikes in four incarnations: # 1, Shimano 105 STIor SLX (with bar-con shifters ) for around $ 3,000 . # 2, Shimano Ultegra STI or XT ( with bar-con shifters) for around $  3,600. The idea is an American made bike for a great price with solid equipment made by two guys who have a lot of experience. Also, there's a chance that it might get to be a kosher bike so you'll be able to ride it on the sabbath.....if that is allowed. 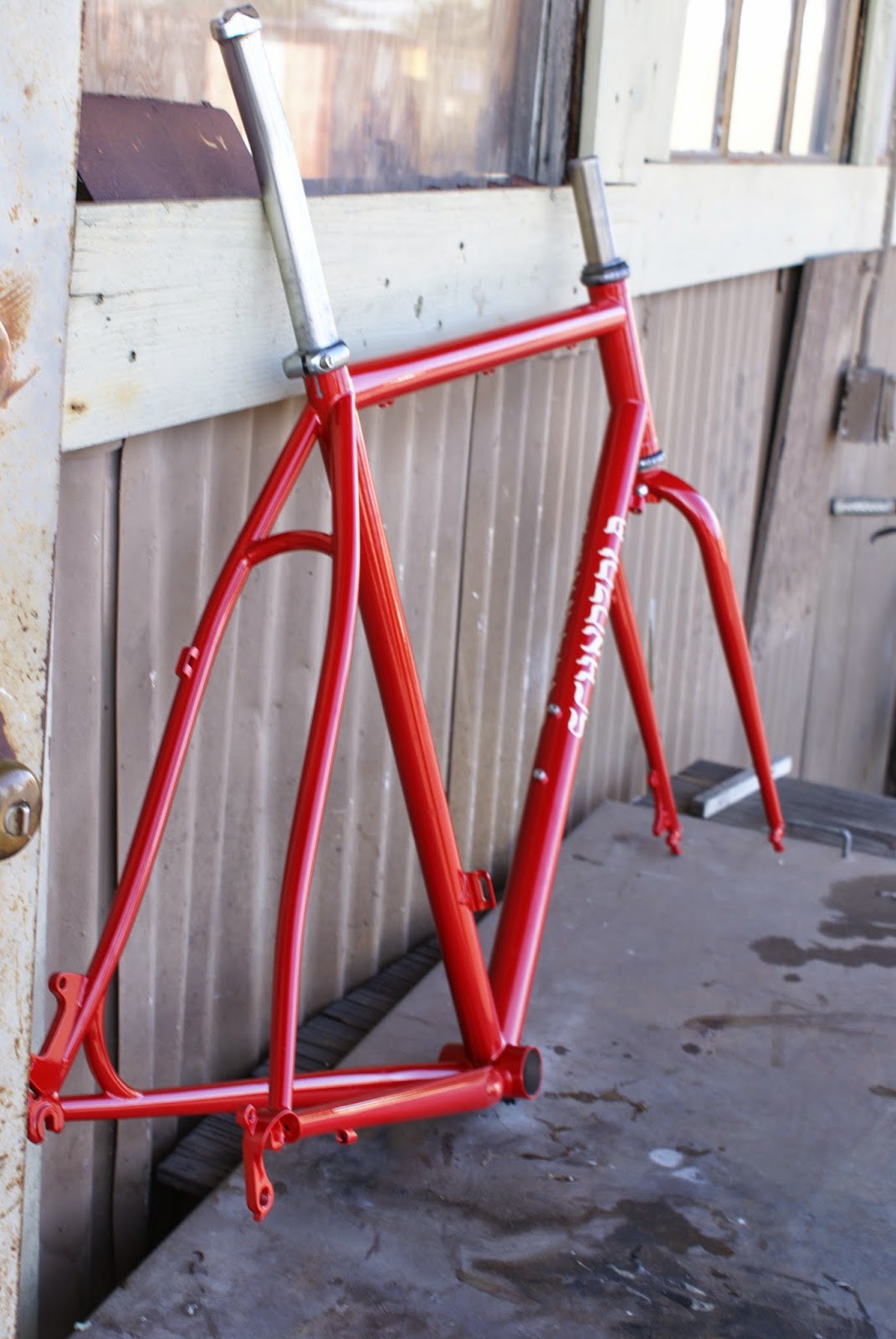 First week of a month of aluminum building 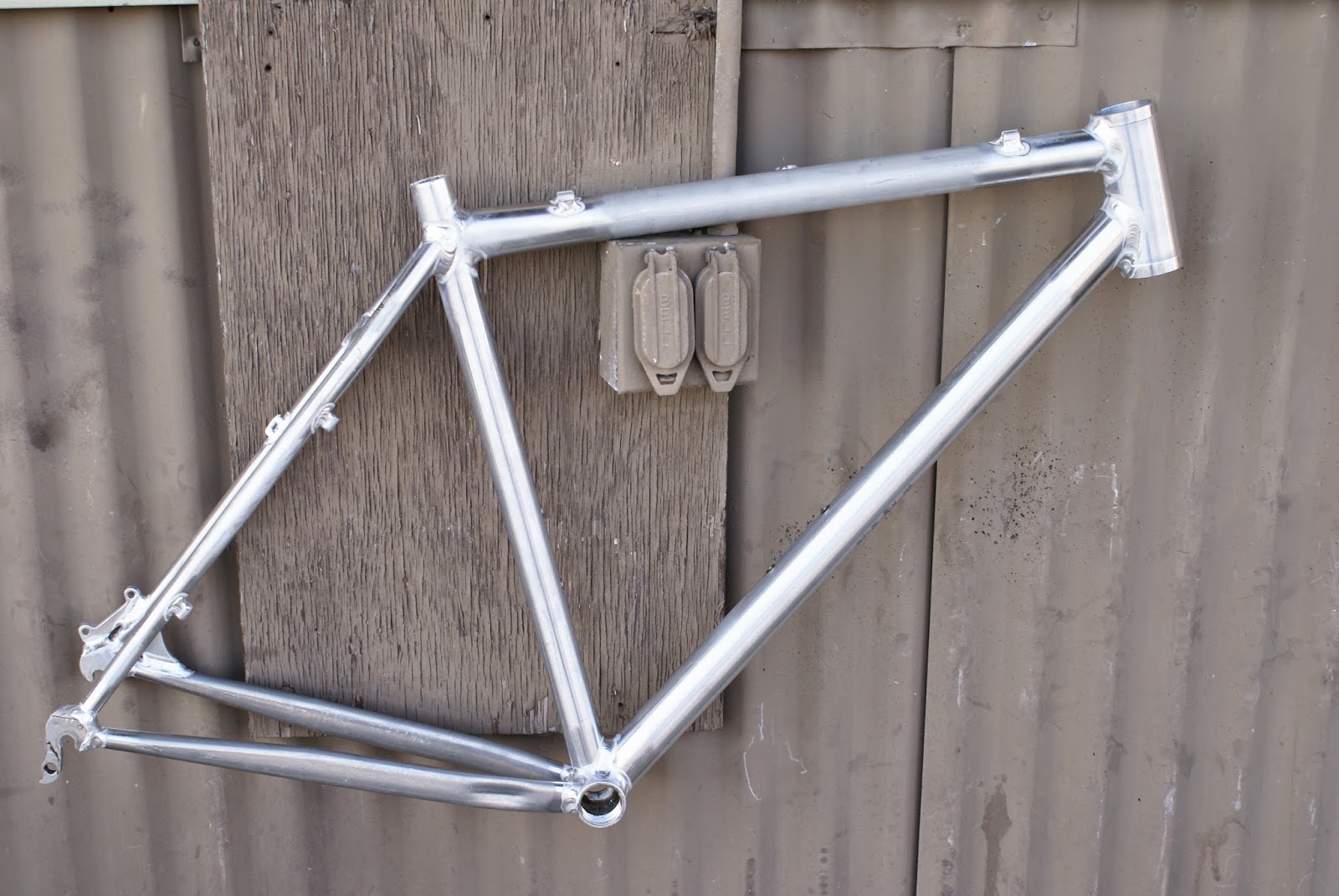 Not the entire month but most of it will be spent building about a dozen aluminum frames, mostly CX but there will be a road frame or two in the mix. This one is going to North Carolina. 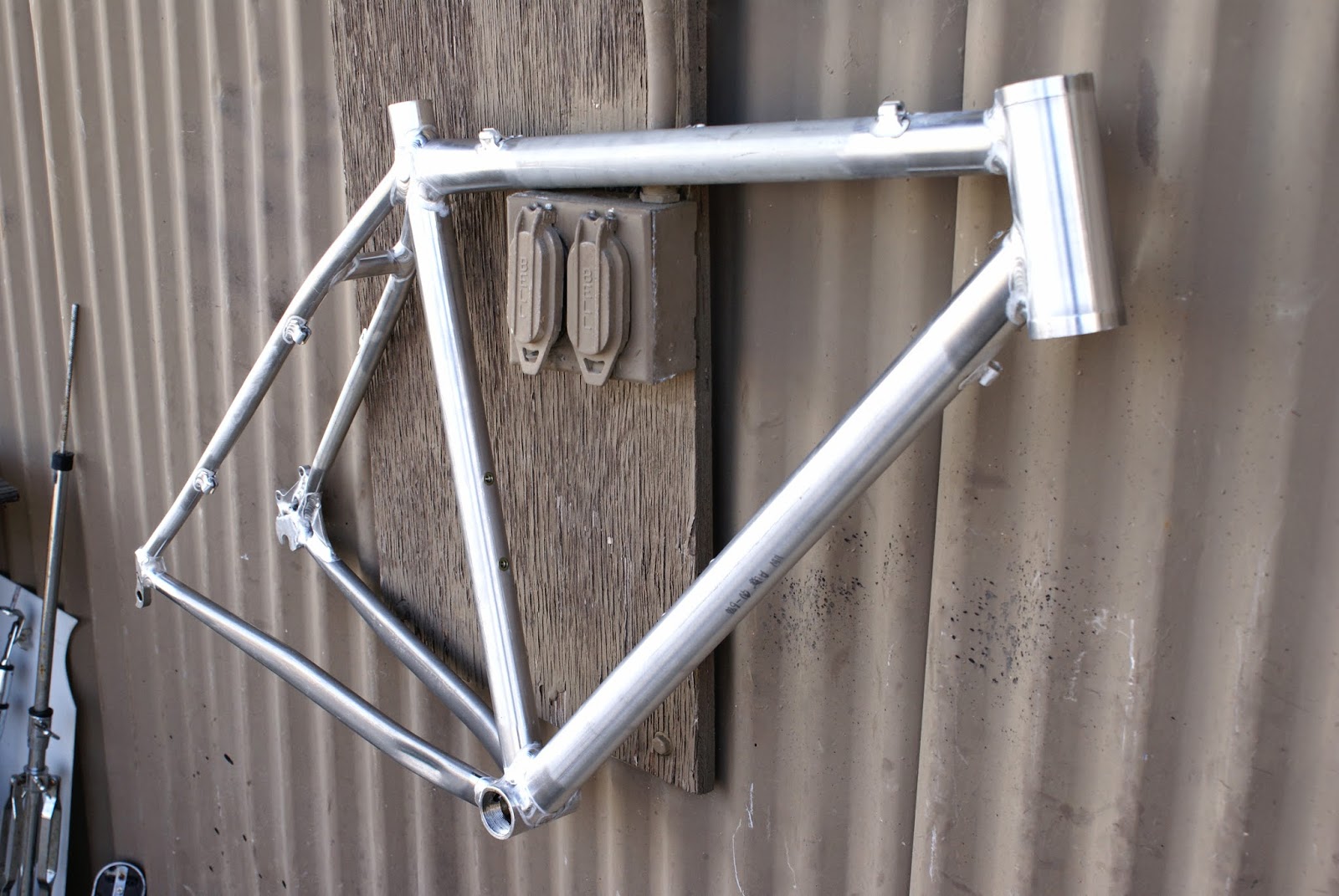 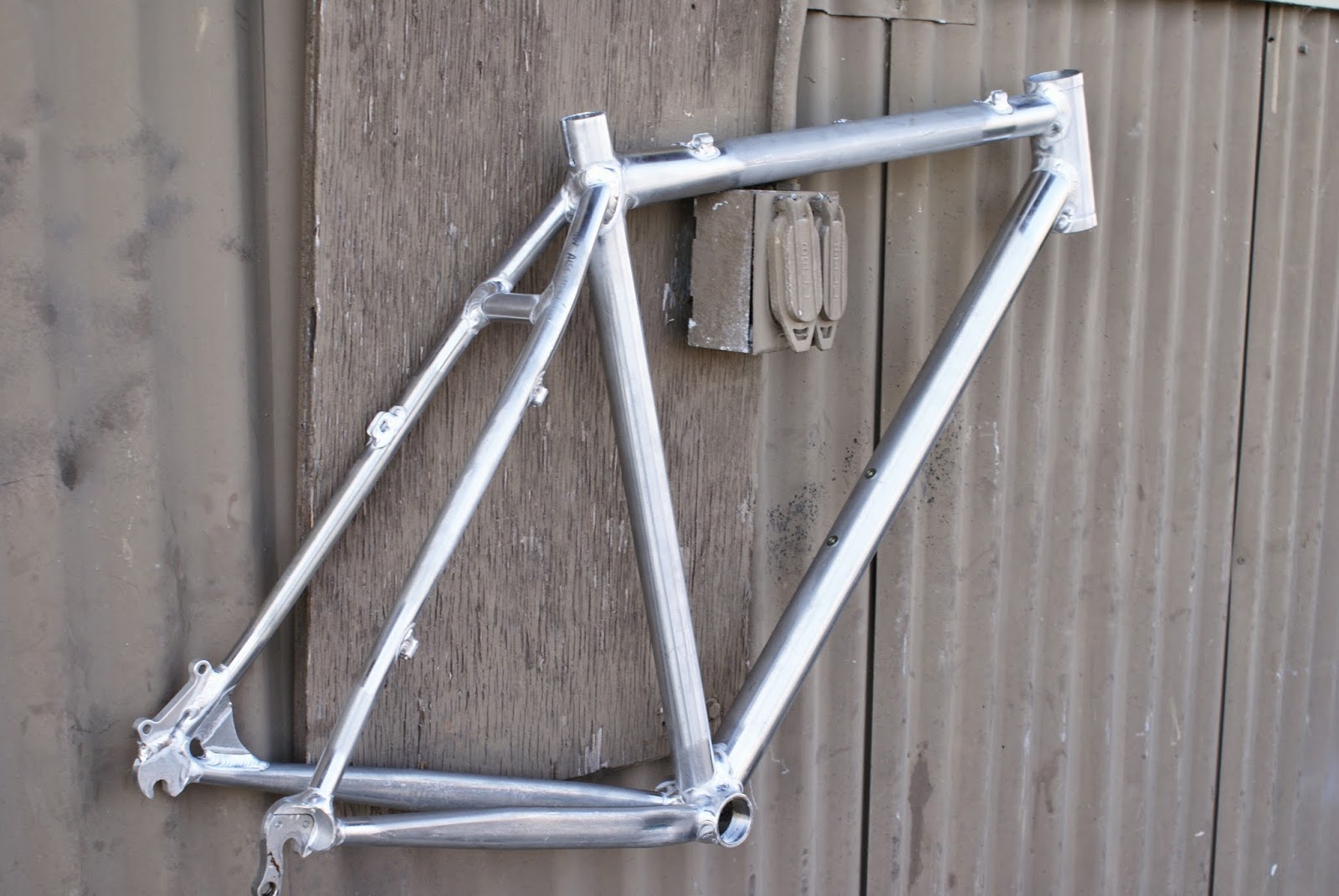 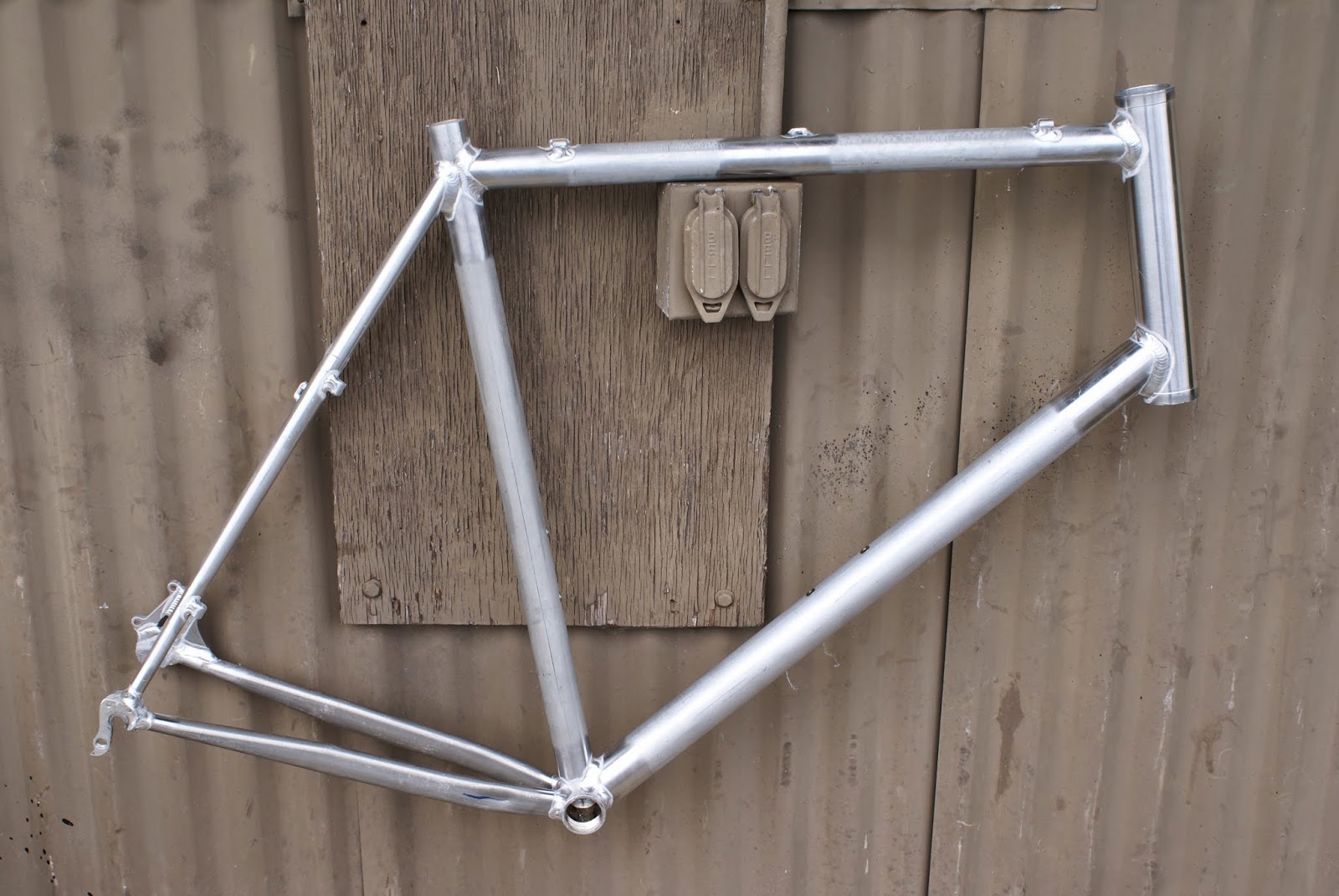 The rider of this frame lives in Calif. He is over 6'5" and has a 37 " inseam, about as long as someone much taller, hence the gigantic headtube. I checked my notes several times to make sure I was not overdoing it..... 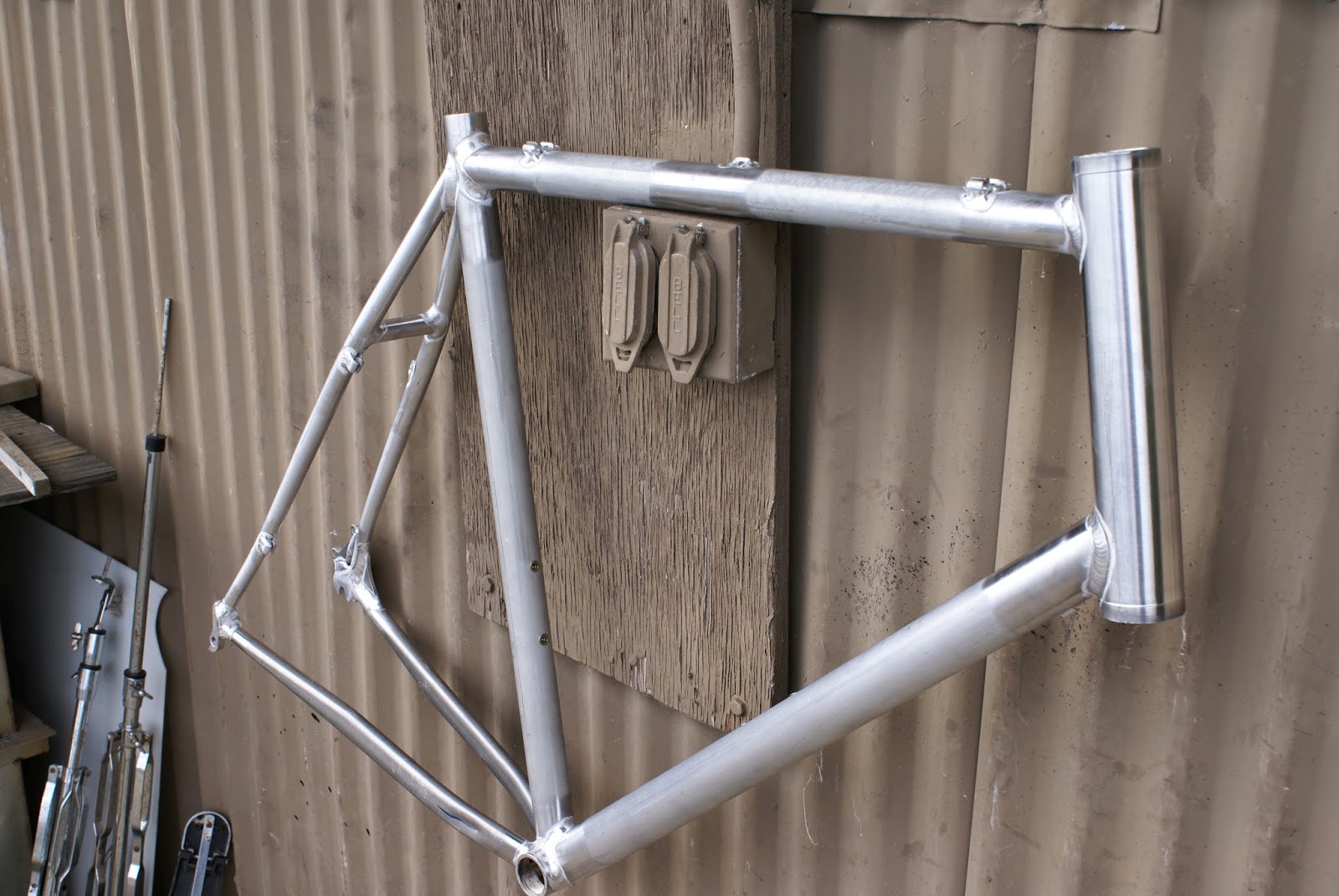 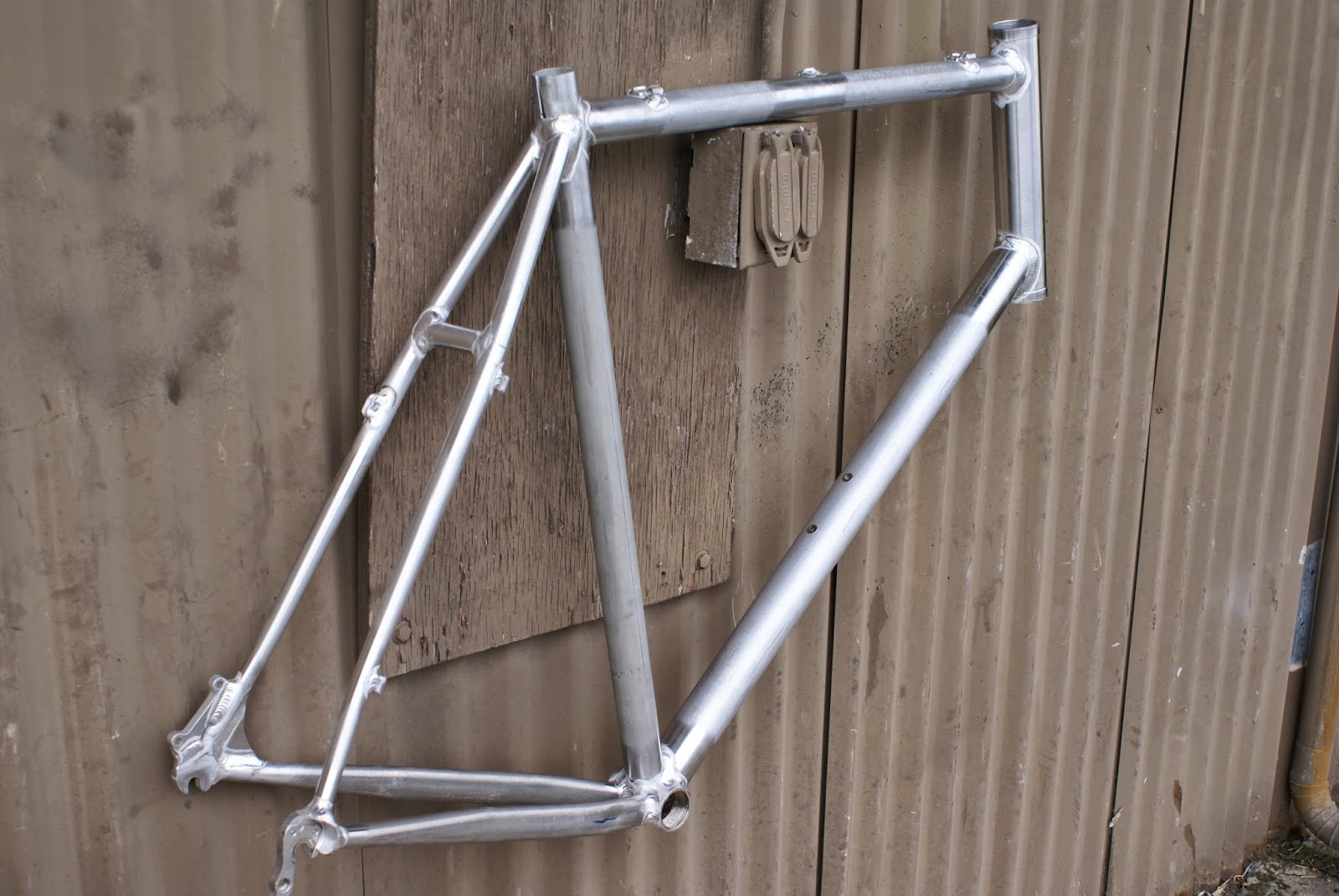 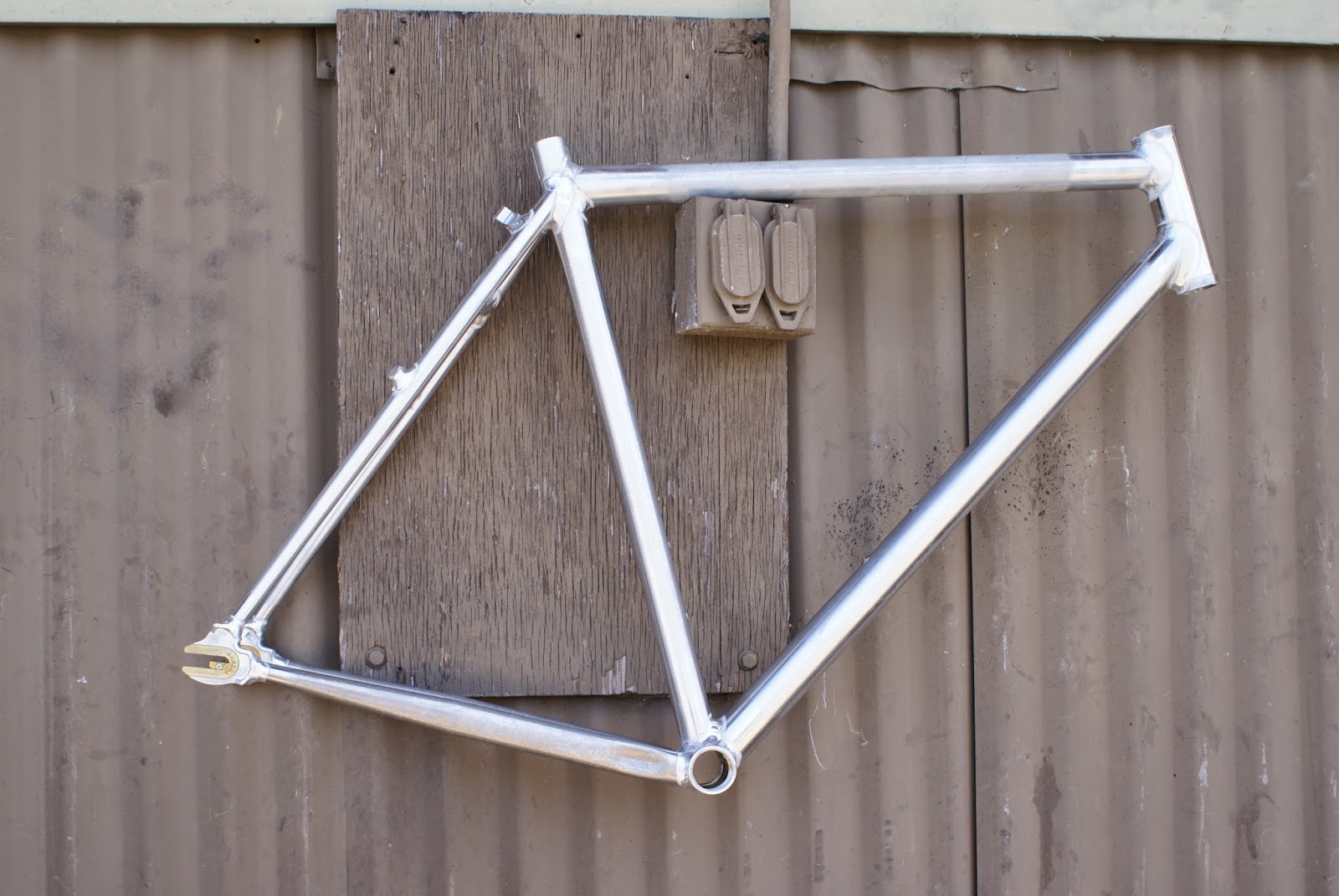 This single speed CX frame is going to a very fast guy in Texas. I hope  that this 3 lb. 10 oz. frame does not hold him back in any way.....it would be cool to have some representation in the lone star state on the CX course. 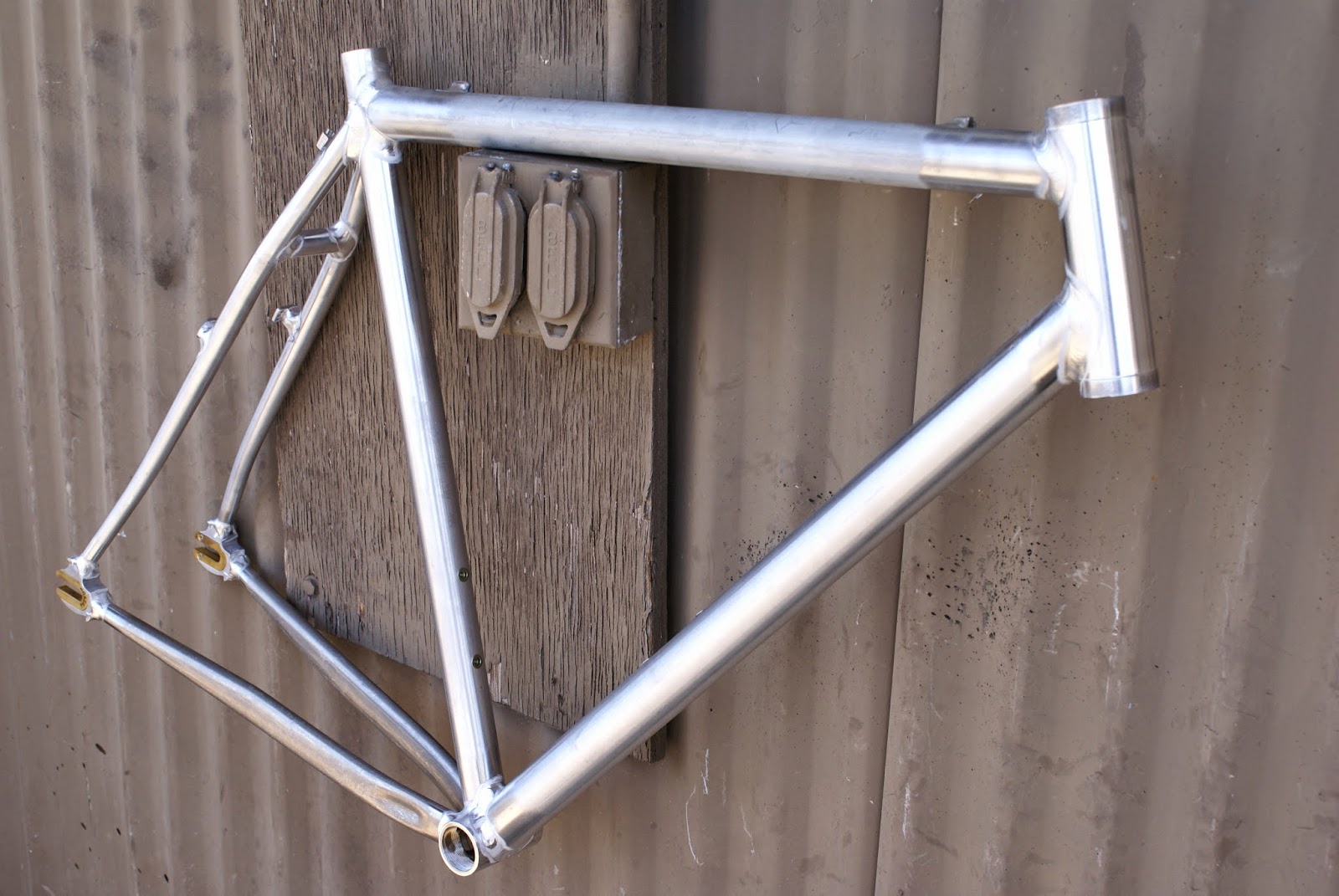 This frame has some pretty nice Mike Ahrens dropouts with bronze faces. The cost about 3x as much as others but they are well worth the expense.US made frame building hardware is the best. 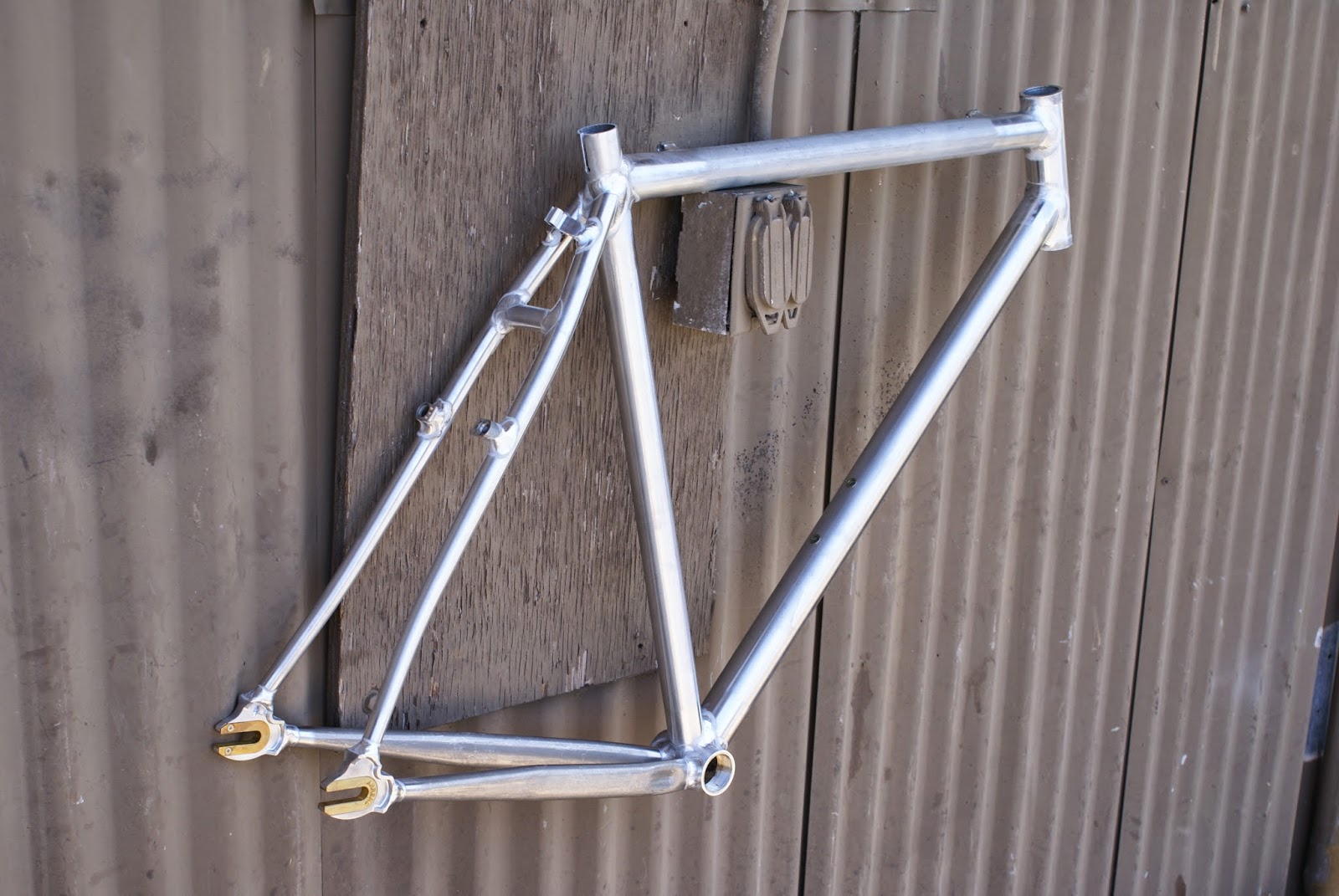 Posted by swiggco world at 8:31 AM No comments: 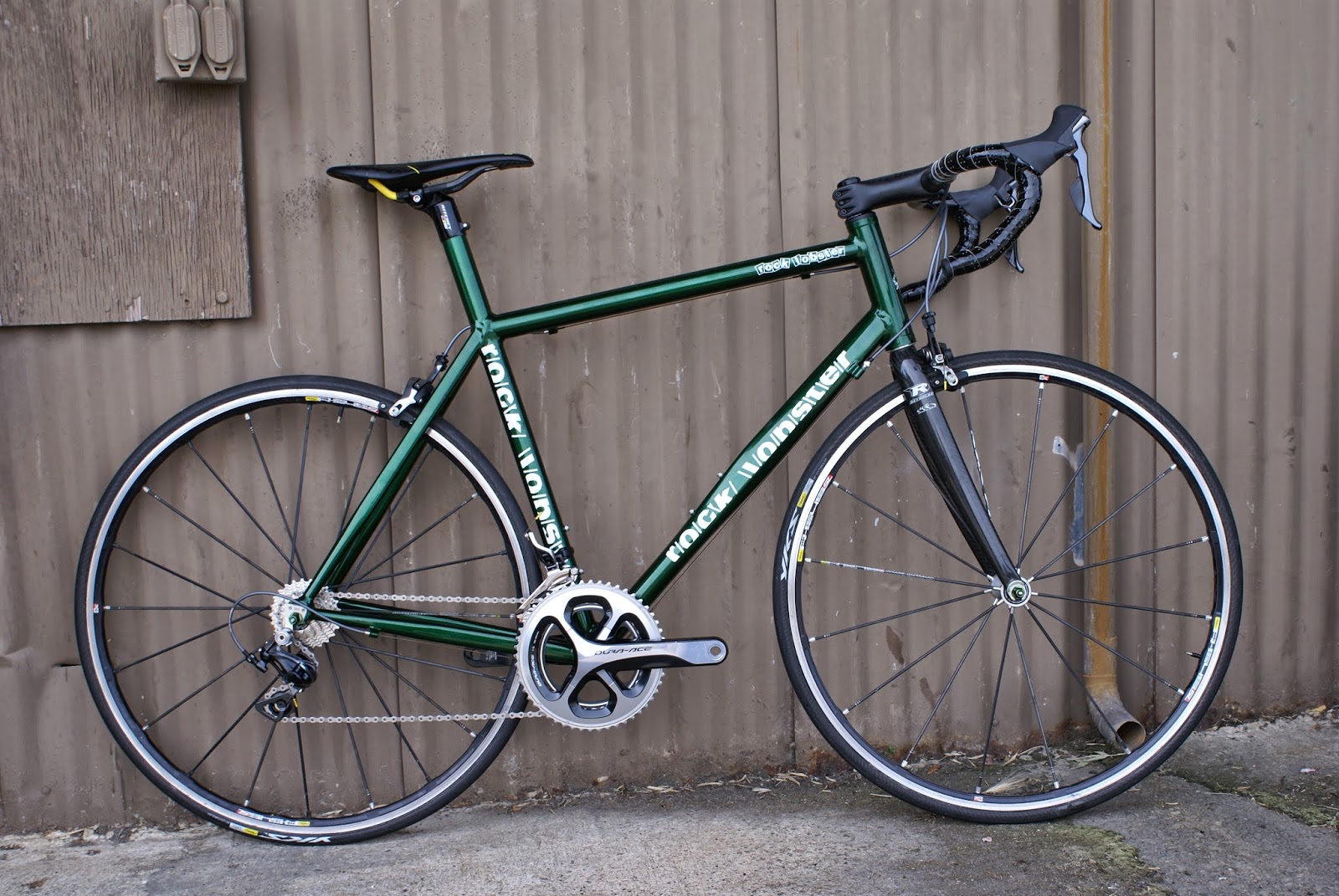 Things are really nuts here-44 frames on order , some going to very far away places. This bike is staying right here as I'll be riding it until either I or the bike has a failure. The tubeset was sent to me years ago for a project that never got initiated. After waiting probably 4-5 years I decided to build up this ultra light Deda 7.9 aluminum tubeset but subbing out the seat tube for a NOS Easton tube long and stout enough to make a seatmast. 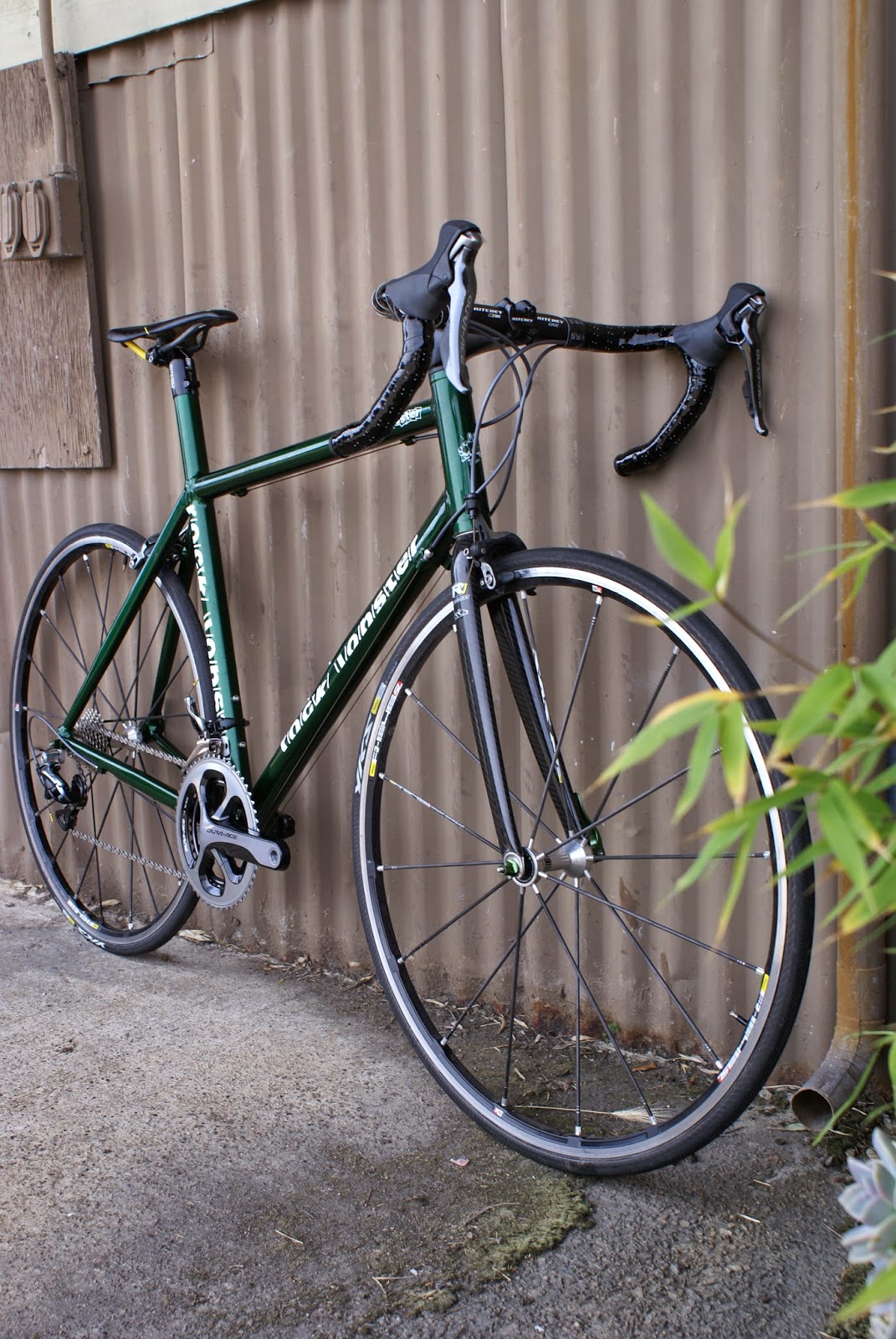 At 14 lb. 12 oz. without pedals , this is probably the lightest road bike I have ever built. The Dura Ace 9000 parts ( with the exception of an Ultegra cassette) and the Mavic R-sys SL tubular wheels definitely keep the weight down. I have yet to ride the bike more than around the building but it feels fine-like a bike.I'll be subbing out an Enve fork next week-I didn't order it early enough to get it here for the annual 'Bike week' show downtown. Still, I made this bike the centerpiece of my display, along with the recent article in Road magazine by Andrew Juiliano. 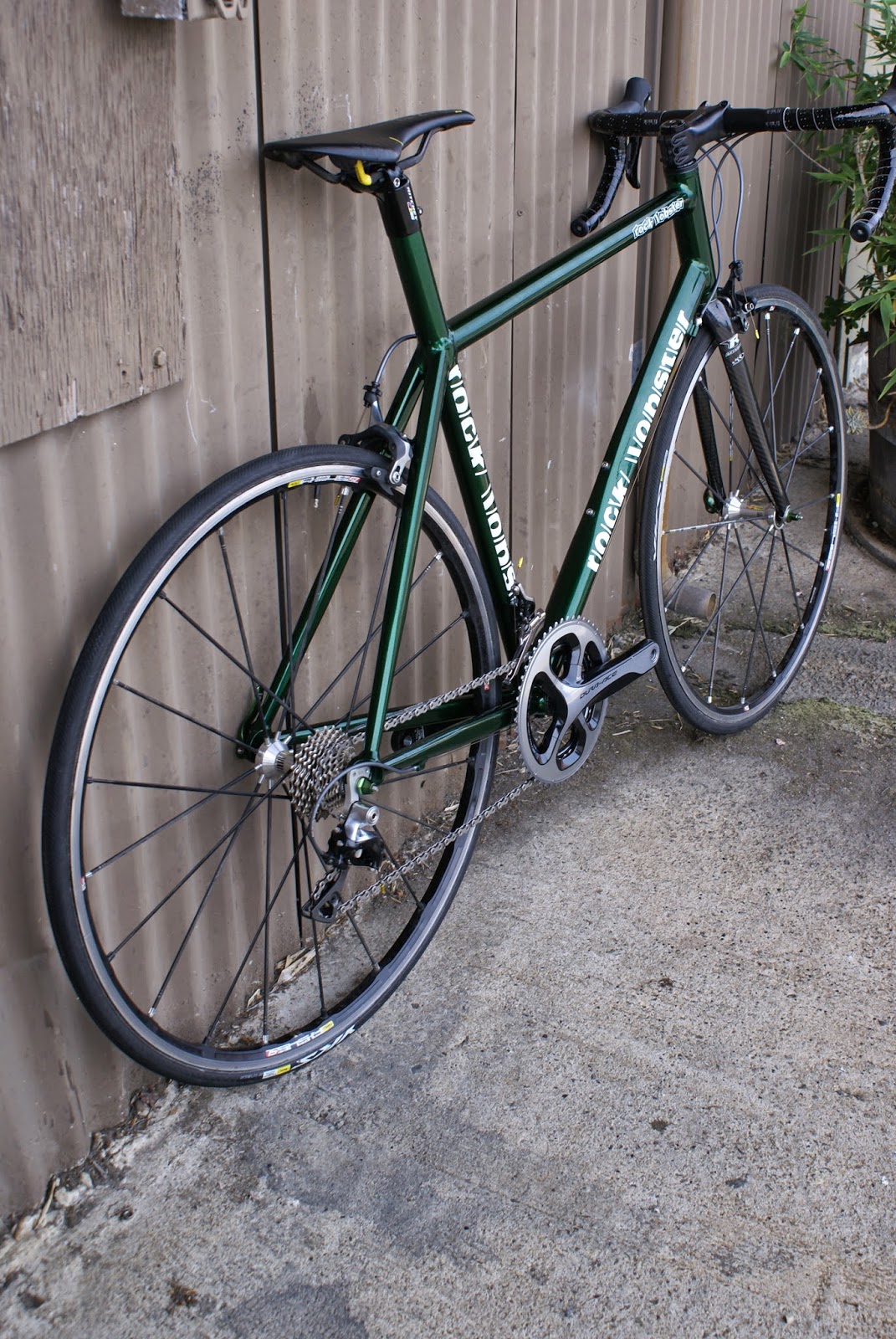 I'm hoping that the seat mast along with the light tubes will make for a smooth ride. I'll be doing some long rides over the summer and will need a bike that is kind to my aging skeleton. 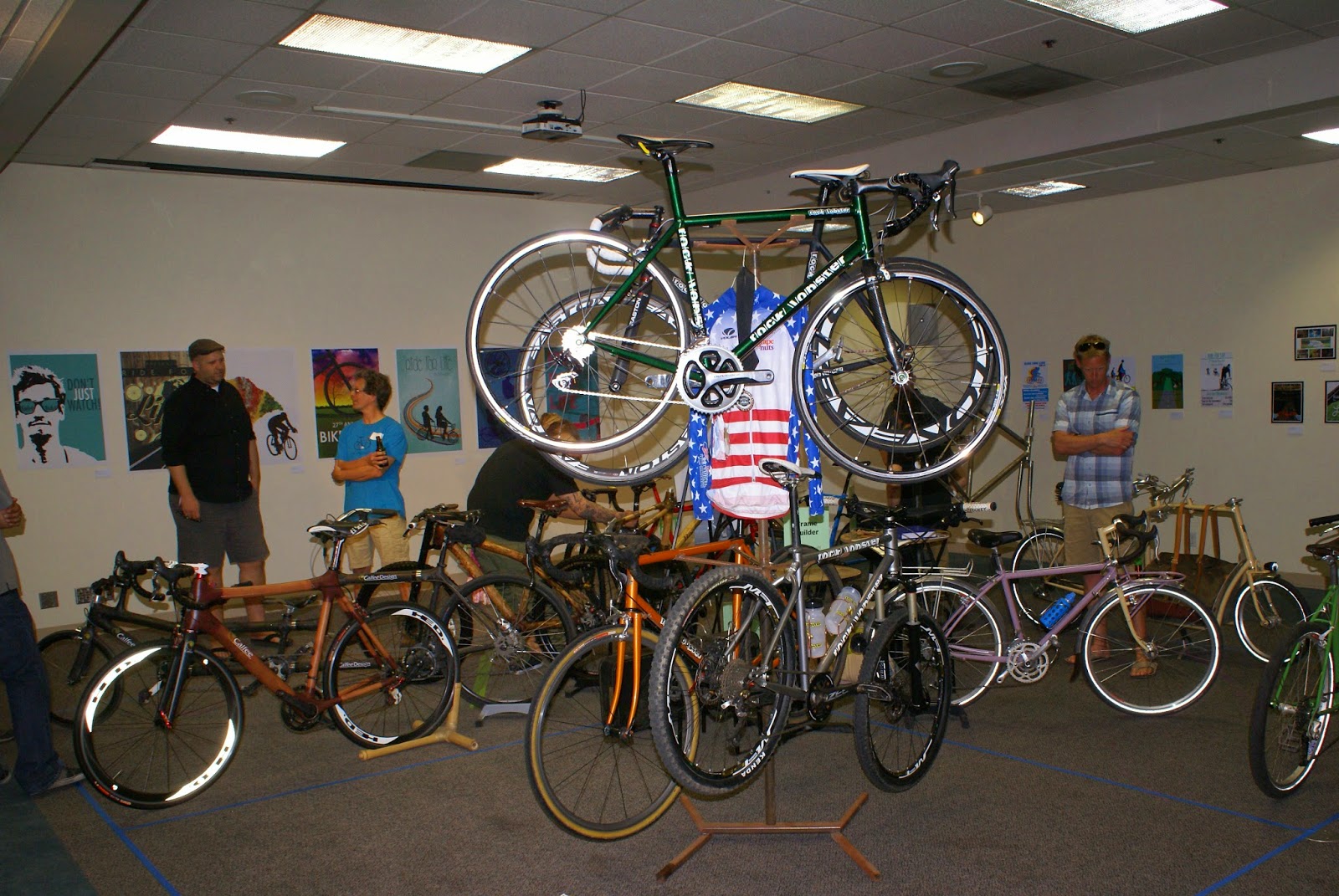 Here's the room I shared with three other builders at the show before the crowds showed up. The builders were Craig Calfee, Josh Muir ( Frances cycles) and John Caletti. As you can see, I brought the most obnoxious display , complete with Aaron Bradford's national jersey with a hole melted in it from an errant torch on a particularly busy day.
Posted by swiggco world at 10:39 AM No comments: