This bike is the ninth Rock Lobster, probably built in 1986. It's fillet brazed out of a mixture of columbus, reynold ans 4130 straight-guage aircraft tubing. The four-bolt stem was specifically built to fit 7/8" Salsa handlebars of the day. This bike predates biopace, Rockshox, clipless pedals and index shifting. I'll be putting up more detailed photos later.....it actually predated the decals which were applied soon after the bike was completed. The three-color paint scheme was the only one offered at the time. 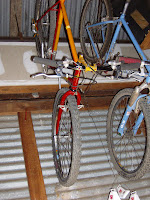 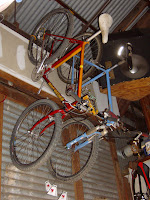 Yeah, I know.......it's been probably two years since I have made a recommendation and it speaks not only to my laziness but also to the scarcity of good bottles in the lower price brackets.....at least ones good enough and plentiful enough to merit a notice by Dr. Swigg. Plungerhead zin can come in a few different forms....Lodi, Sonoma, etc. This one is the 2005 Dry Creek old vine version. I really liked the Lodi edition but this Dry Creek number eclipses it in terms of taste,complexity and it also has the distinction of coming from a boutique appelation for this particular varietal. Dry Creek wine for $ 13.99 ? And good ? Oy, soch a deal. I vant a case......Plungerhead is from the Sebastiani empire, a family winery that has just sold off a portion of its catalogue so Plungerhead might be going through some changes in the coming vintages....better get this one before its history. Cheers, Dr. Swigg. 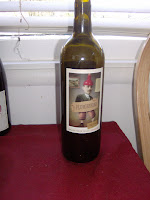 Posted by swiggco world at 9:01 AM No comments:

Here is a steel frame I built in between the last '08 batch and the first '09 batch of aluminum frames. This one wasn't due for a few weeks but I know this racer is wanting to get those winter fixed gear torture miles in and far be it for me to stand in the way. After this it's back to aluminum for the rest of the month. 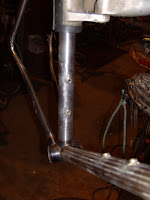 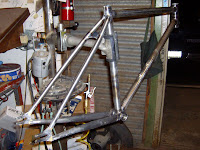 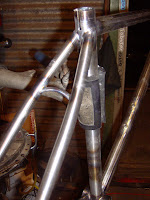 Posted by swiggco world at 8:51 PM No comments:

The last batch of 2008 has leaked into 2009.....what can I say ? I'm a framebuilder-at least I show you pictures of the frames and don't make up some excuse that they are tied up at the painter......that's for later in the month. Hey, I'm going on vacation and I wanted these frames to be on the way out the door before me. This first one will eventually be in Vermont.......hope he has snow tires. It's a 26" wheel single speed mtn. frame with most of the ADG goodies, the upper yoke and the slider dropouts in 7005 aluminum. 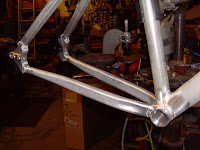 Here it appears that the frame is looking longingly at the outdoors, wanting to get the heck out of my shop. Be patient, little frame-it will happen soon. 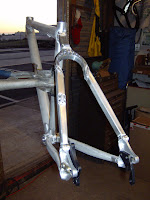 This frame is for none other than our valiant team mechainc, Ryan. He has been wrenching for us for three seasons and is chomping at the bit to race cyclocross like the rest of the team. Cyclocross....it sells itself, I don't know...... 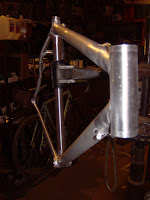 I made Ryan's seatstays a little more curvy than stock so he could spot his very own bike at a glance...it gets confusing when there are upwards of 20 seafoam green team bikes in the tent and you are in a hurry to line up for your race : " Heck, which one of these green $%^*'s is mine ? Iv'e got 30 seconds to get to the start ! Welcome to the club , Ryan ! 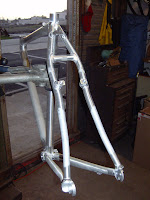