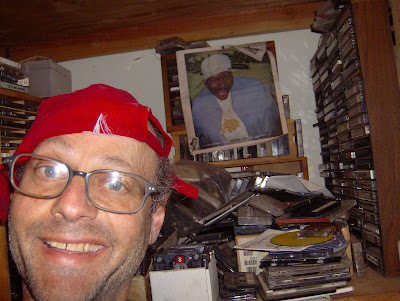 As long as Mr. Fab got my back, it's all good. Nice to slow down a bit after the show and weld steel for awhile. 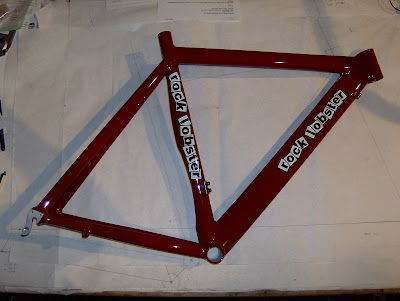 This ain't steel, I built it last month when in the heat of aluminum building. A guy intends to go really fast on this one. Its a TT bike for local racer and U.C.S.C. student Art Rand. I'm pretty sure he'll make this thing move down the road. 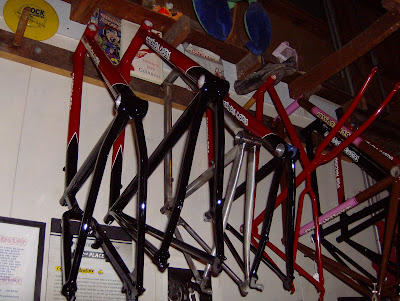 More progress on the V.O.S. team bikes,also from last month. These bikes in the second batch have a nice little white stripe between the red and black. With nearly twenty of these built they will be hard to miss at the races this spring.
Posted by swiggco world at 7:16 PM 4 comments: 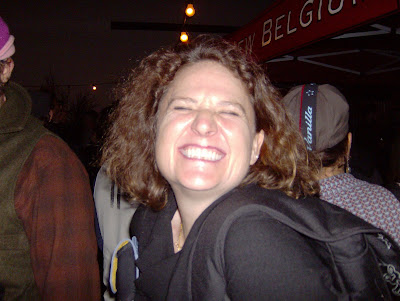 Sheila Moon knows how to party. The party on Saturday night at a bar called plan B had a raffle and Sheila won a black messenger bag big enough to put her travelling buddy Barb Howe in.....maybe could have saved on airfare on the way home. Barb was hobbled with a torn Achille's tendon but still came to all the after parties and did her best Capitain Morgan . 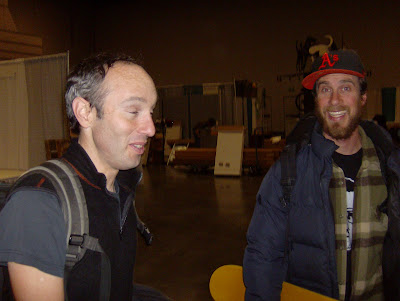 A.K. was around although not visible most of the three days. Seemed as though he had a good time, probably better than we were having as we were working the show nine hours a day. 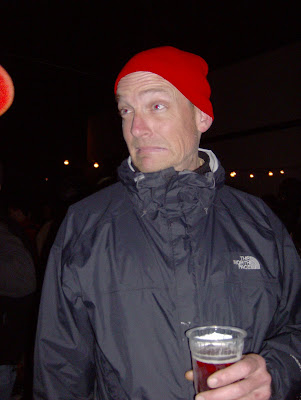 Capitain Kirk made the trip north and ditributed the latest FRP sportswear. Steve Garro told me repeatedly "You would be surprised at how many t-shirts you could give away." 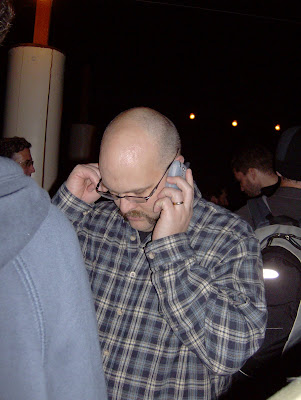 -Truer words have never been spoken.Poor Daniel Limburg attempting to talk on his phone with all sorts of yelling and carrying on taking place during the raffle. 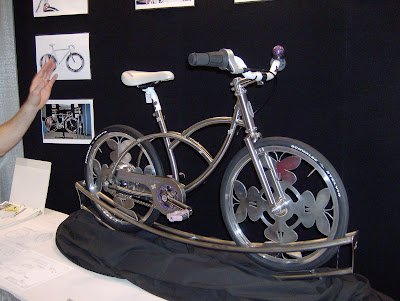 This might have been the cutest bike in the show....yours for the low low price of : Don't ask, you can't afford it" 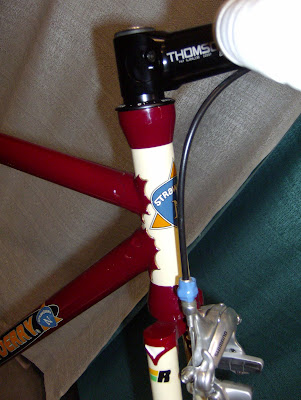 Andy Newland's creation.....integrated headset in lugged steel. Andy is the master and was a major inspiration for all the framebuilders of the late '70's such as Ross Shafer and myself. 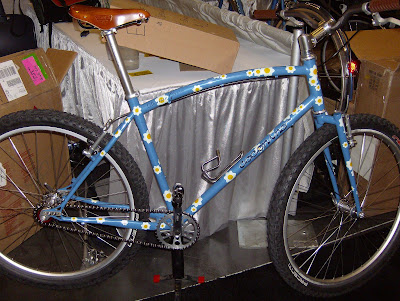 Steve Garro's wife Denise has a new ride, replete with flowers. Looks nice and sweet now but you can be sure she is going to really beat on this bike on the rocky Flagstaff singletrack. 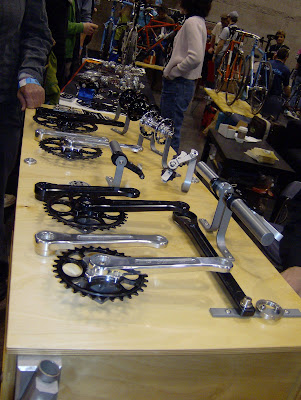 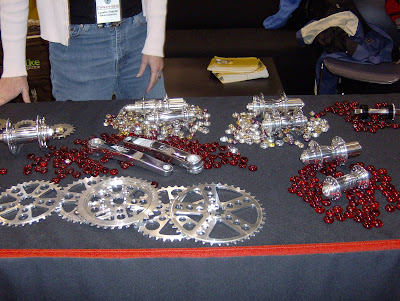 But wait.....White Industries stuff is mighty cool as well. Anyway, I'm glad to be back in Santa Cruz, ride a bike...see the sun and most of all, get the heck away from all that rolling art,brooks saddles, wooden fenders....bling bling yada yada. All this art for art's sake is great but bikes for riding is where I reside. Gotta pedal 'em, no matter how pretty they may be ! 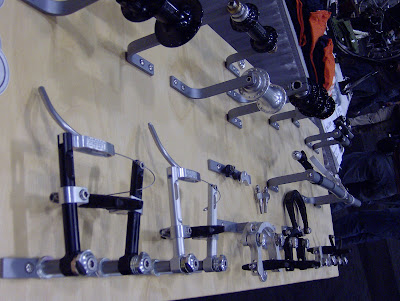 Heck, might as well finish off with the linear brakes from Paul Price. Stuff that works and keeps on working. This stuff is probably a lot more reliable than water buffalo horn forkblades.........
Posted by swiggco world at 6:33 PM 3 comments: 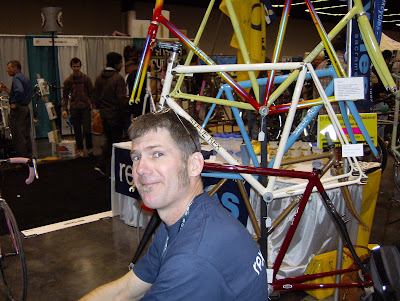 Yeeah, Bacon town ! Prtland....at least outside the handmade bikeshow it was Porltand. Inside it was the custom bike capital of planet earth. Next door neighbor Steve Rex showed his excellent fillet brazed machines in a tidy economical display. 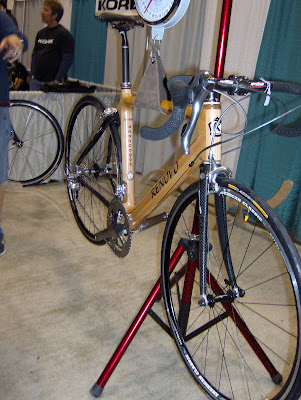 Yes, this is a sub 18 pound wooden road bike and it looked like something you could really ride anywhere. 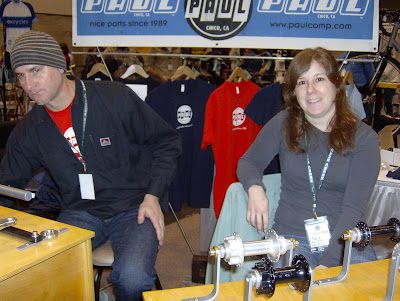 Paul Price and Tammy held court at his display of superior aluminum . The best brakes and single speed gear around made for a constant glut of folks in front of this booth. 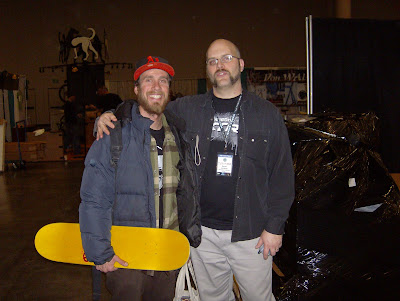 Simon shows off his new skateboard to Daniel Limburg of Shimano. Daniel treated us to a fine sushi dinner on Saturday night after the busiest and most draining day of the show.Ever spend four days in a trade show and not see the sky ? That's what I did. On a good note, though it was the NAHBS and I was surrounded by the best collection of fine handmade riding hardware ever assembled on this planet. The show was a huge success for all concerned and our booth was no exception as the press and public even took notice of our stripped down simple racing machines. IT's nice to know that full-on race bikes can be shown next to rolling artistic statements and still get an enthusiastic response.....after all, there is some exprexxsion in a rider going fast on a bike. 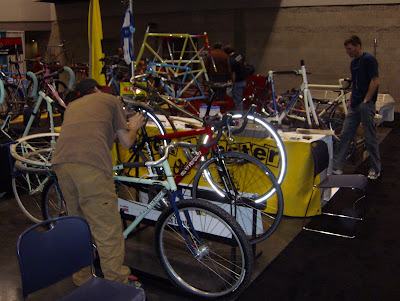 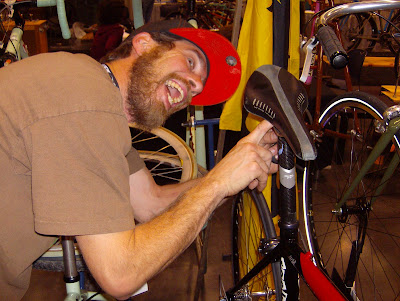 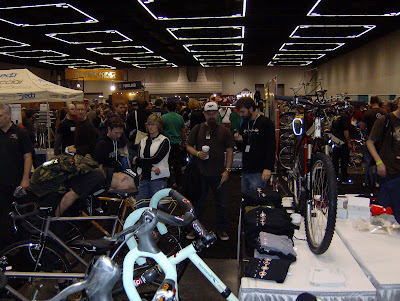 Saturdays crowds were enough to make the fire marshal close the doors for nearly an hour.Good thing nobody yelled "Fire!" 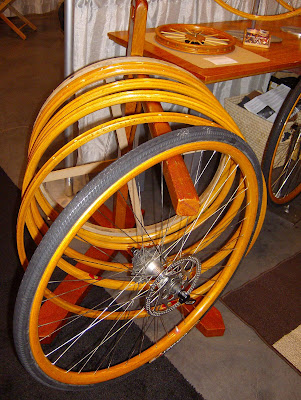 Yaaaaa, iss good, this wood, no? Wheelsmith Rick plied his wooden wares at the show. Do not ride these through termite colonies.
Posted by swiggco world at 8:53 AM No comments: 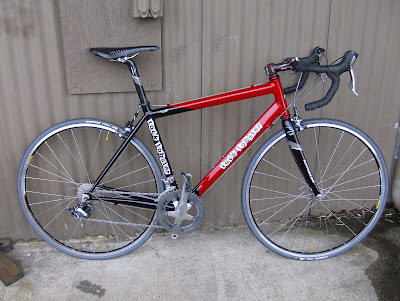 This one is bound for the handbuilt bike show. It may not be fancy but there are two kinds of bikes in my opinion: Artistic statements that you can ride or straight ahead racing bikes like this one. Both are valid means of transport.....this one is just faster and less expensive. 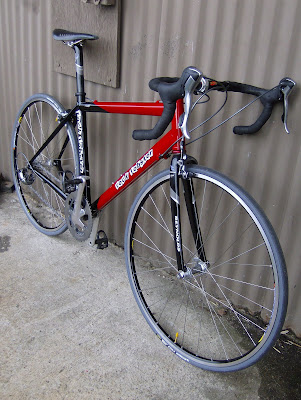 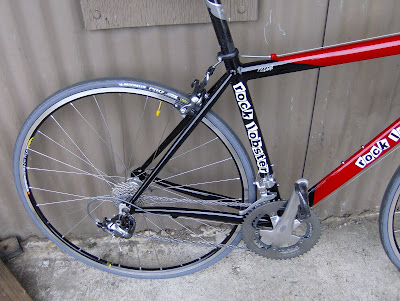