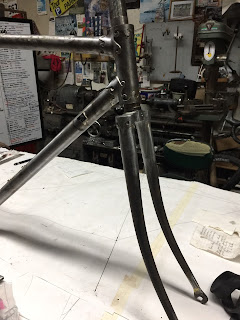 Maybe I'm compulsive about this work-I think that I set a precedent with the total of frames I have built this year. Last year I thought that I would build 100 but I didn't quite make it. This year I didn't go to Ashland to teach my two week frame building class so I had the thought that it would be possible to build 100 frames in a year . 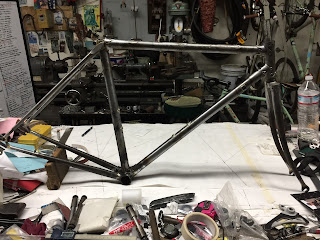 In September I got bogged down with some projects -at that point it looked like 100 would not happen. Job one is to do quality work-the goal of 100 was pretty far from the top of the list. I didn't want to hurry on any build but I did want to put in the time, be efficient and not waste moves. If I did this I was still thinking that I could hit 100 if I didn't make too many mistakes. 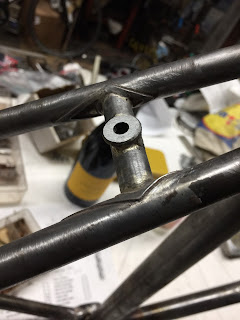 Here it is, just a few days left in the year and yesterday I finished this frame in the photos- # 100.I also built the matching fork. This was nearly four days of work with a few fits and starts, some tubes that went into the scrap pile and plenty of changes on the fly. I took some very old lugs that I bought from Bruce Gordon and tweaked and bludgeoned into this tiny road frame. Most of the materials predate when I built my first frame. The tubes and some of the fittings were given to me by people who had plans to build a frame back in the '70's but never went through with it. 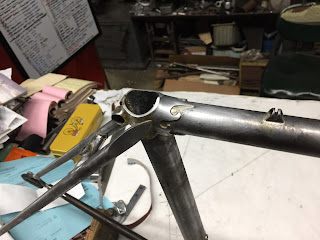 I feel like I'm batting cleanup-taking stuff that has been sitting in boxes for nearly four decades and turning it all into something that really didn't need to exist, except for the fact that all the materials were supposedly destined to be used for something eventually. There's a lot of old frame tubes sitting in garages that represent a time when building a bicycle frame was done with hand tools, a piece of string and a measuring tape-some sort of torch and a lot of time. With only a few exceptions , places where bicycle frames are made do not employ these methods or materials. It's a craft from another time for the most part.
Stepping back into this world was a real eye opener. It had been a number of years since I had built a lugged frame. I didn't forget the process-but with this frame I pushed the materials into a shape that they didn't want to be-it was a real fight. I can't say that I completely won the fight but I'll know for sure when the bike is assembled and gets it's first miles. I put an unreasonable amount of work and really endangered my chances of finishing it before the end of the year with all the time I spent but I'm happy that I chose a very challenging project to cap off one of the most productive years in the history of my shop.
Posted by swiggco world at 4:41 PM 1 comment:

Finishing off the year 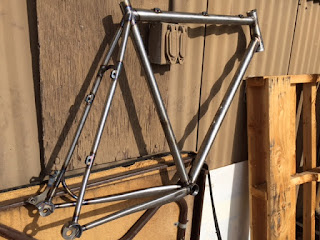 This has been a busy year for me-maybe the busiest ever. I did not teach my UBI class last summer so I spent the time in the shop for the most part. These two frames are # 98 and # 99 for the year. I should be starting # 100 later today. This might be the first time I have built 100 frames in a calendar year in nearly a decade. This was not a goal I set out to do back in January but once I got to November it looked like a good chance for it to happen. 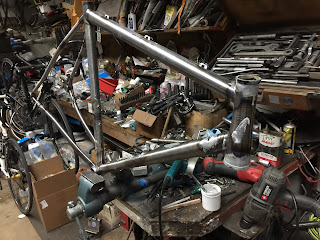 My main goal is to do the best job I can on these frames for my customers. I would not try to build 100 in a year if it meant that I was cutting corners or doing sub-standard work to do so. My customers deserve the best I can do all the time. That said, the goal of 100 for the year might just happen. Not sure what # 100 will be- I'll have to contact the next people on the list to find out who's ready. If nobody is ready I have a special project I'll work on. Once # 100 is done I'll have a few days to clean the shop, do recycling and fill boxes of old bike parts to donate to the local bike church. Might be good to start 2018 with a cleaner work space.
Posted by swiggco world at 8:44 AM No comments: 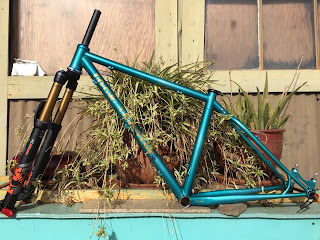 This fall saw a few more MTB builds than in recent years. This is one of the more interesting ones as it has internal dropper post routing and rack bosses. The aim of the owner is to have a bike for back woods touring as well local trail riding. This one is steel and it is built to last. 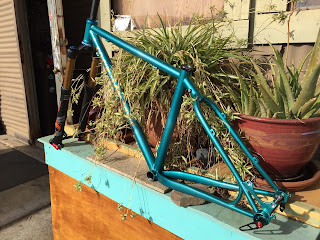 The headset is a King 'Inset-7' in turquoise but it actually looks more blue- so much that it matches the compression knob on the Fox fork-a nice coincidence. 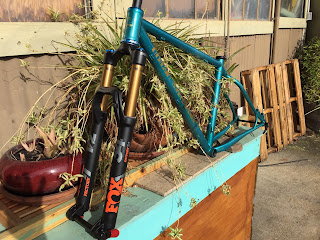 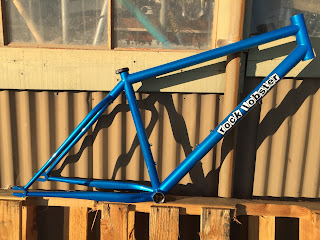 Yes, that's correct . There's a few people out in Kansas who ride fixed gear off road and this frame is for one of them. He's a guy who really can hurt a bike so his value as a test pilot can not be underestimated. I built him a frame maybe a decade ago and it has been back to the shop for repairs on several occasions. My guess is that eventually this one will be back for repairs,even with the extra efforts I made to make the frame indestructible. No frame is unbreakable-it is my hope that this one comes closer than most. 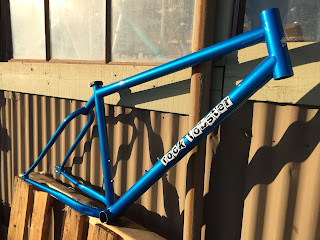 The rear wheel will be a 650 and the front a 29er . The rider has done a lot of test rides with all sorts of wheels and he settled on this configuration. This is a first for me and I'm anxious to hear how it rides. 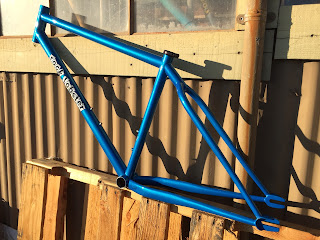 Posted by swiggco world at 8:23 AM No comments: 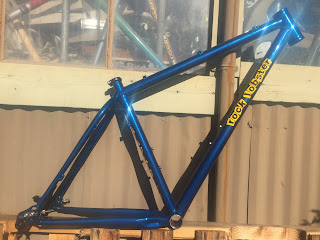 Just in time for Christmas- this one looks like a blue Christmas tree ornament . The frame was ordered with Paragon slider dropouts so that it could do duty as a single speed as well as a geared bike. This one has a modern front end but still has the style of the Team Tig s.l. mountain frame that I have been building for over 25 years. 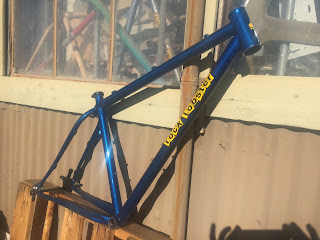 The Paragon head tube will house a tapered steerer fork and the rear inserts are for a 12x142 thru-axle. There's a lot on the frame that make it compatible with current components but it is still the basic steel hard tail-a good choice for twisty single track. 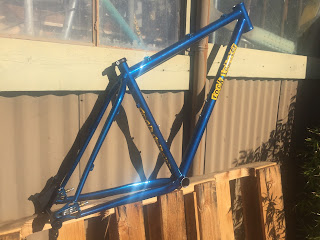 Posted by swiggco world at 7:04 AM No comments: