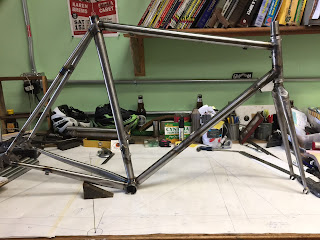 This customer wanted something a bit off the beaten path-a frame with modern welded construction but with traditional diameter steel tubes and a 1" threaded fork. This frame looks very much like something I would have built about 25 years ago. I even put on the Bocama head tube collars from that time period- you can still buy them. 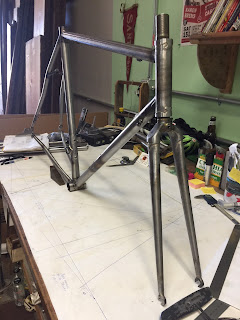 The straight blade crowned fork was my go-to style in the early to mid '90's. The new aspects of the frame are the s-bend stays and the fact that the frame is only 3 lb. 13 oz. , quite a bit lighter than what I was building in the '90's. 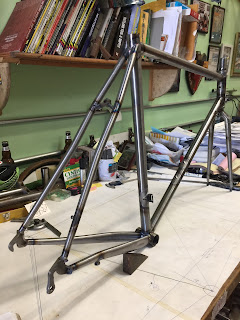 Having a pump peg, a chain hanger and a front der. braze-on , this frame has most of the things I can put on a bike other that rack and/or fender mounts. I used to have a bike like this in about 1998 made from Reynolds 853. This frame is mostly Columbus with a NOS Tange head tube that I machined down to the same thickness as a Columbus SL head tube. The brake bridge is one I used a lot in the '90's- I called it the 'star wars' brake bridge as it kind of vaguely looked like one of the small spacecraft in the film.This was a real trip down memory lane, back to the time I was building frames in a metal shed on Gross rd. , about 6 miles from where I am now.
Posted by swiggco world at 6:43 PM No comments: 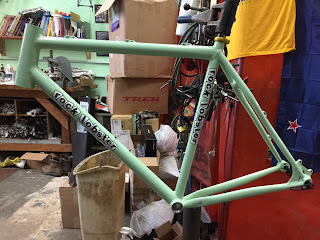 Since this frame will be built up with a Sram CX-1 group it is set up post-mount for the brakes. 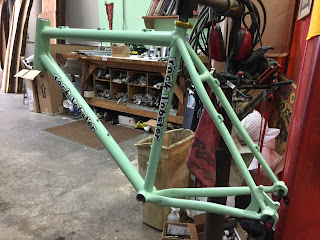 I also have been building quite a few flat-mount frames for Shimano . Some of our team bikes will be sporting the Paul's Klamper mechanical brakes and I will have those in photos in the upcoming weeks.One of the flat mount bikes just got built and it tipped the scales at 17 3/4 lbs. with tubelesss clinchers- that's lighter than my bike by over 2 lbs. ! 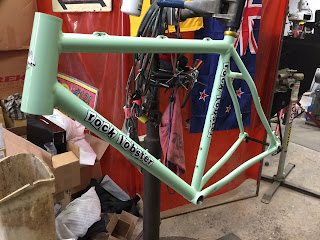 With the season only a week away from starting, this is pretty much one of the last couple of team bikes to be delivered.
Posted by swiggco world at 7:36 AM No comments: 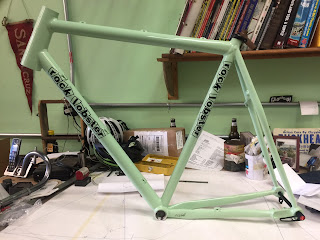 This customer is going big- the frame you see is nearly identical to the frame I built for the same customer last year. Two bikes means having a fresh one in the pit- hopefully someone working there to hand off the bike and wash the muddy one when it comes in. CX season is almost here ! 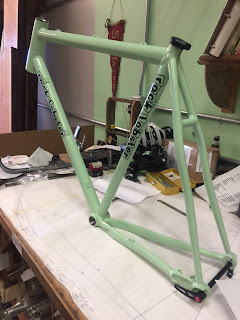 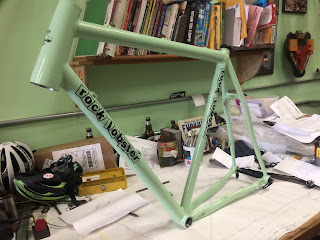 Steel gravel frame for a local 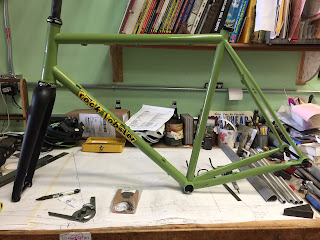 Every once in awhile I get to ride with this guy. I'm honored that he chose me to build his next bike. This one is steel with a flat mount matched to a Whiskey CX fork- the newest one with the flat mount as well. Most likely this bike will get set up with Shimano- the stuff that always works. 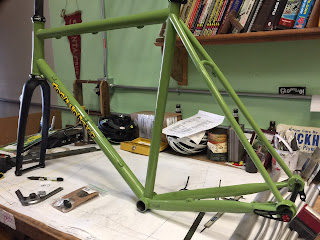 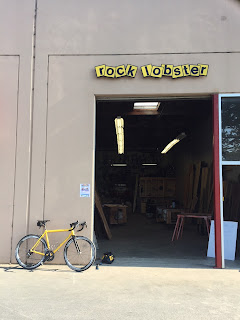 In case you were wondering, yes- I did move the shop, although it is only a block from the old location. The new shop is at 719 Swift st. # 10 in a much newer building. I am sharing the space with a woodworker. Our respective spaces are well defined and my space is in the back. I have an open floor plan, something I have not had in more than two decades. The shop phone is out at the moment so email or my cell (831) 334-5874 would be the way to get in touch with me.
Posted by swiggco world at 8:40 AM 1 comment: 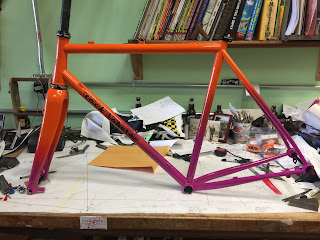 Nice fade on this one- maybe one of the nicest fades I have seen on one of my frames in many years. This paint was courtesy of Allan Neymark. He told me over the phone that it was 'beautiful' - he's a guy who usually never gets excited about his own work. He has a reason to be proud of this one. 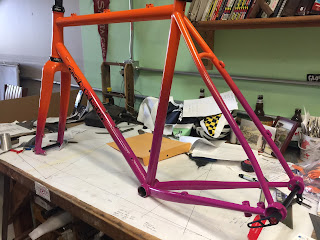 The Whiskey fork is painted to match. The flat mount in the rear coupled with the post mount in the front is by design. This frame is getting Paul Component 'Klamper' mechanical disc brakes that fit either style with the proper adaptor. 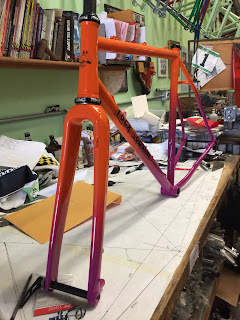 The King headset is the NTS taper that is on most of my steel frames.
Posted by swiggco world at 7:14 PM No comments: 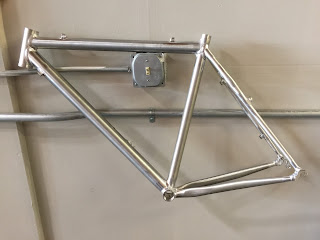 The frame you see here is the first frame built at my new shop. Yes, I'm still using an electrical box for the photo shoot- didn't want to give up that tradition just yet. The frame is for a customer who is currently living in Mexico. He will be coming back to the US in the fall and his frame will be ready for him. 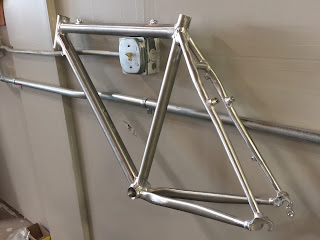 In the coming weeks I'll be putting up photos of the new shop so that people can see how the layout of the workspace is much better than the old shop. Sure, the old place had character but there were some real issues with my welding area. I have a nice open floor plan and I'm already enjoying the space . 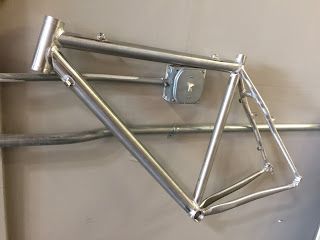 I have storage for about 35 built bikes and 40 frames. It really looks like a bike shop. If you would like to visit you can find the shop at 719 Swift st. # 10, Santa Cruz, Calif. 95060. It is only about a block from the old place but it is literally on the other side of the tracks. I think I'm on the right side now !
Posted by swiggco world at 6:57 PM No comments: 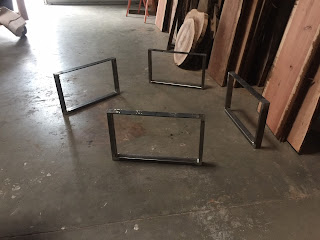 I have to say- moving might have been a total pain but the new shop is looking to be a better environment to build in. My new welding area is free of clutter and the new welding table is at a height that no longer tortures my lower back. Maybe it took a couple of decades but now I have a much more comfortable setup for welding. It's amazing what one can put up with when the work flow is really heavy for a number of years. Now, all my machines are in a row and my mitering setup is only a few feet away from the frame jig- in the old shop I had to walk across the shop to get the tubing cut. Everything in this new shop was located to save steps over the course of a typical day. 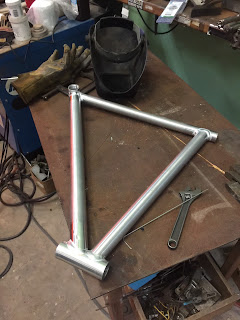 Ironically, my list of builds is shorter than it has been for nearly a decade. I still do have 22 frames on order but in this new shop I don't think it will take long for me to get through that list. Could it be that I might run out of work now that I am in a new more efficient shop ? - Stay tuned......maybe in 2019 you'll be able to order a frame one week and have it delivered the next week. Not a good situation for me but for the customer it would be pretty nice.
Here's some of the work I have been doing since I opened the doors for real last week- a couple of coffee table bases and the start of an aluminum CX frame. I have only about 5 more aluminum frames on the list- the bulk of my pending orders are steel. I will be resuming the steel work in a few weeks.
Posted by swiggco world at 8:22 AM No comments:

Finally welding in the new shop. 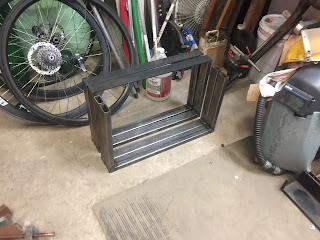 This does not look like much but it does feel good to fire up the welder after almost two weeks of moving. This project is for the guy I am sharing the space with- he's a fine wood worker and these will be bases for two coffee tables he is building. I might be doing more of this work if my quality is good enough.
Posted by swiggco world at 6:46 PM No comments:

The shop has migrated to the other side of the tracks 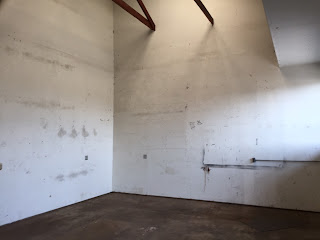 This picture was taken yesterday just before I closed the door for the last time at 2533-D Mission st. ext. Since the fall of 1996 this has been the place I spent countless hours welding bicycle frames together. I might have built nearly 2,000 frames in the space , created a cyclocross team with some help from a few folks , had the good fortune of getting some great racers on my bikes in national and world class events , even won a few local races myself. Now it is time to go. 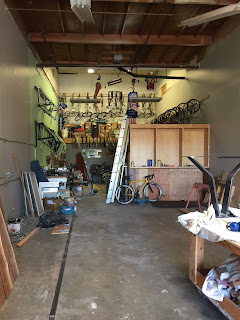 Although I am crammed into the very back of a commercial space that I share with a talented woodworker , the place really has a bike shop feel- more so than the last shop. There are almost 40 bikes up on hooks and room for nearly 30 frames. I'm still getting things put away and organized- things will be a bit different from now on- the place is much cleaner and will have an open floor plan. The frame building area will be much more efficient and I hope to waste fewer moves. The bike assembly area will have an organized tool board and a nice wheel building station. All of these improvements are out of character for me as I used to thrive in chaos. Now I'm going to attempt to thrive in orderly surroundings. Even on the last day of moving there were two complete truckloads to the dump and recycling......I got rid of so much stuff as I was really worried that I would never fit it all into the new space. I'm still not sure that it will but at least now there's a bit of hope that I can be up and running by Monday.
I started moving about two weeks ago while still prepping frames here and there. I fell off a ladder last week, hit my head and got a concussion, twisted my ankle and got scraped up pretty well. I am still having issues with dizziness and walking- that said, the move went surprisingly well, mostly thanks to the community of friends and associates I have built up over the last couple of decades. Without these people I would not have been able to pull off this move. Now all I have to do is pull off working in a new shop with high ceilings, high rent , freshly painted walls and plenty of three-phase power. It could be way worse.
From now on it will be Rock Lobster cycles  719 Swift st. # 10  Santa Cruz, Calif. 95060. This could almost be considered a 'destination' shop'.....not because of me but more because of the work of many people that went into the creation of this place. I walked in there yesterday afternoon right after sweeping out the old shop and looked at the new place- I liked what I saw. Hope that you do too.
Posted by swiggco world at 7:40 AM 3 comments: