My bike,err-yeah, yet another one. 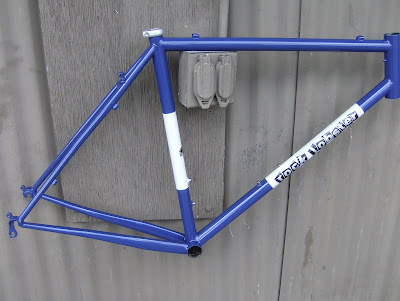 Is it a randonneur ? No. Is it a touring bike ? No. Is it a road racing bike ? No. Is it a 'cross bike ? Definitely not. What I call it is a big tire road bike and it will be pretty much what I'll ride this winter after 'cross season-at least, when I get it back from a possible magazine test session. I built this frame up at UBI when I was teaching in August. I have built a number of these for folks but have not been able to get around to building one for myself until this year. The big bonus is being able to shoot the dirt on the way home from work without breaking out the 'cross bike or the mountain bike. So, you might wonder, what's so great about that ? Well, I don't know how to put it into words but about 1975 my friends and I used to ride road bikes in the dirt quite a bit in Topanga Canyon . The bikes were a lot of fun on the trails but they tended to get pretty mangled , especially after a designated burn spot. this nicely paneled edition should stand up to the beating better than our old '70's European racers and also provide a smoother ride with some Michelin Jet 30's. My hope is that I'll be able to do the Big Basin loop without a pinch flat or a backache. 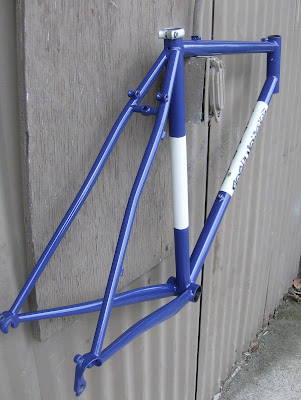 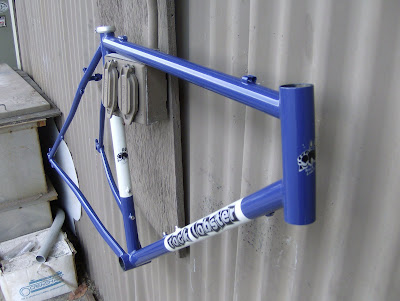 Ahh, yes-did I mention that I built a fork as well ? If one is to run long reach calipers a custom steel fork is nearly the only choice for proper fit. A carbon option is available from Wound Up-US made and really bombproof. For me , building a fork is the most cost -effective way to produce this bike ......not to mention , the matching paint is a style point on a bike like this. The paint scheme is kind of a ripoff of the 1978 Gios Torino 'super record' look. I remember when I was 25 and working in a bike shop how great those frames looked when we first took them out of the styrofoam-lined boxes from Italy. I never could afford one........good thing I learned how to build. 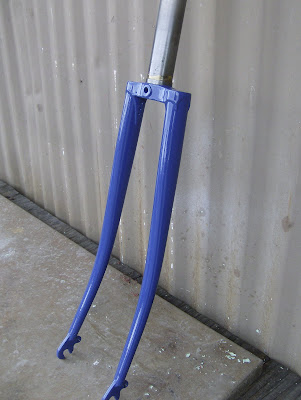 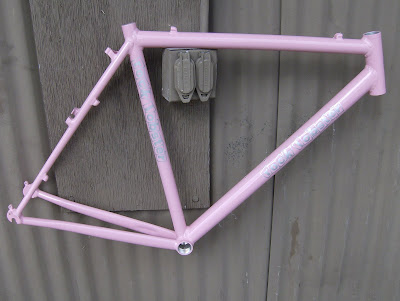 Every once in awhile somebody asks for a pastel pink with silver decals. I don't know about you, but this reminds me of Christmas cans big cans of Almond Roca. I always ate myself sick on that stuff but never got sick of it. I guess i never get sick of this particular look, either. It's an offbeat choice for a full-tilt scandium race bike but if you can beat the pack on a pink bike, all the better. 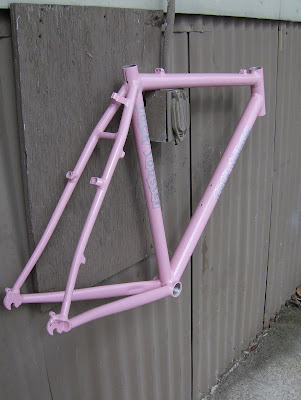 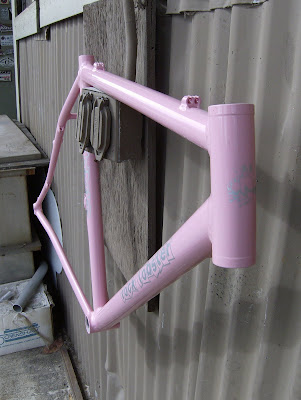 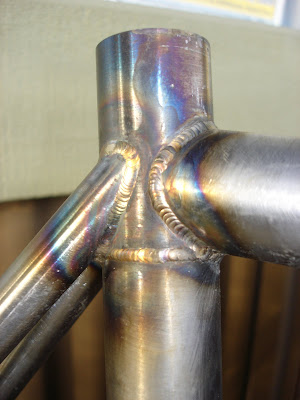 True Temper S-3 is about the thinnest wall steel I can buy and it takes a lot of care to weld it. This frame is for a 6'5" rider and it weighs a scant 3 lbs. 13 oz. , a weight you would expect of an aluminum frame, not a steel frame of this size. I didn't use the S-3 seat tube, head tube or chainstays as I feel they would not be rigid enough. Even tough I didn't use the whole set, the frame still came out lighter than I would have expected. I used a sleeve at the top of the 1 1/4" diameter OX seat tube so that a 27.2 seatpost could fit. 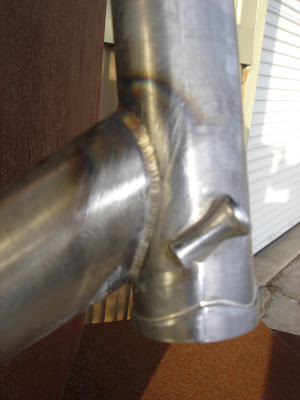 I used and OX head tube with a 1.2 MM wall , thinner than I normally use so I put on these old-style re-enforcements at both ends....kind of like an early '90's Ibis frame. 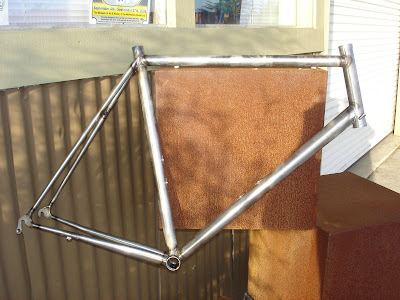 Yes, I still am a framebuilder.. 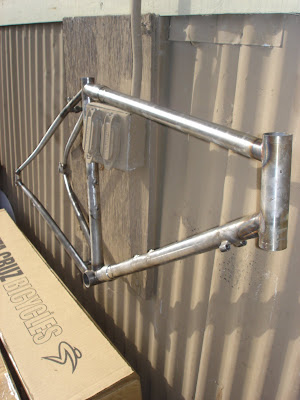 With liitle or no blogging I'm sure some of you might assume that I have gone away and hung up the torch. This is definitely not the case, I have just been buried in all sorts of situations, some my own making and some I really didn't ask for. This aside, I have been belching out work with some regularity. This frame is a 'big-tire road' with the addition of S&S couplers. I built a steel for as well as the bike will be in and out of a travel case many times, not a good place for a carbon fork. 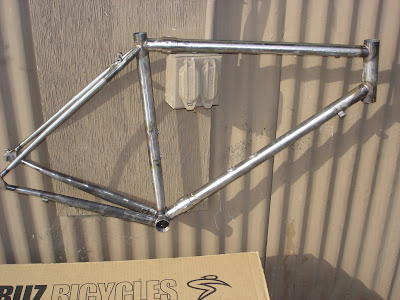 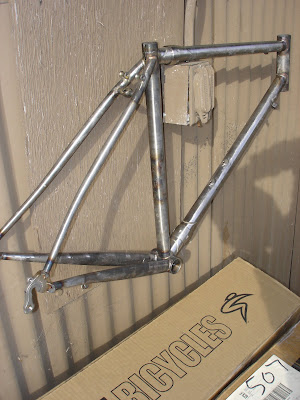 Here's the fork with the Pacenti 'Paris-Brest' crown, one of my favorites as it allows for lots of fender and tire room, something required on this type of bike. 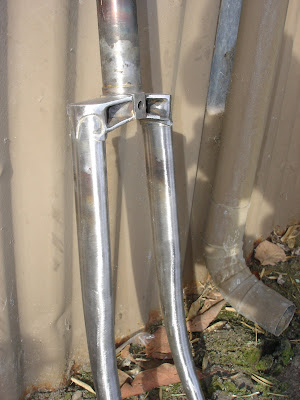 Here are some of the last aluminum and scandium frames for the winter back from the painter. He still has about a half a dozen more......I built a lot of frames in Aug-Sept. and they are going to fill up the rack in the next day or so. I think I might get to that 100 frames for the year mark that usually is a little more than I can do. When you don't get a long vacation it is surprising what you can get done. Next year......long vacation ! 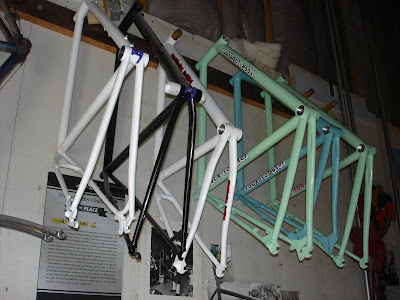 A gathering of frame builders

Since the construction or rather, destruction at my shop ( see overopinionatedframebuilder.blogspot.com)has proved to be noisy and dusty ( Friday morning they were using a chainsaw for the demo work..) enough to make it unfeasable for me to get much done, I took a Friday off to go up to Santa Rosa for Levi's Gran Fondo ride on Saturday. The night before the ride, a gathering was organized by Jeremy Sycip and others for any Nor-Cal or Oregon frame builders to attend. It wasn't a real "show", it was more of a street-corner party-but a street corner party with about 22 frame builders in attendance. We all showed up with our bikes that we would ride the next day with about 6,000 other folks. 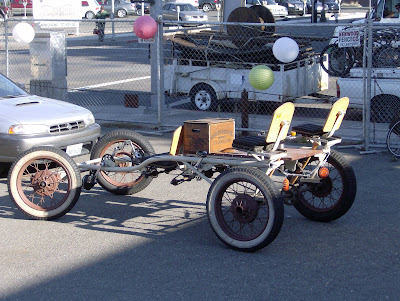 Local Santa Rosa folks came to the party riding some incredibly odd machinery. Most of the rigs were designed to run on railroad tracks as well as the street. The creativity in the construction of these rideable giants was remarkable. 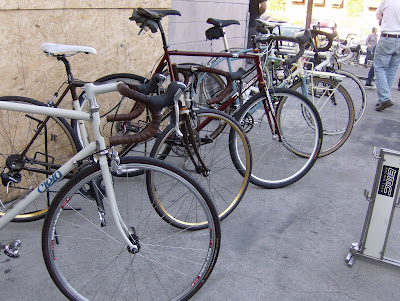 Rick Hunter, fillet brazer extrodinaire takes a look at the assembled bikes. Most builders brought 'cross bikes or big-tire road bikes as the route involved about 1/2 hour of dirt road. 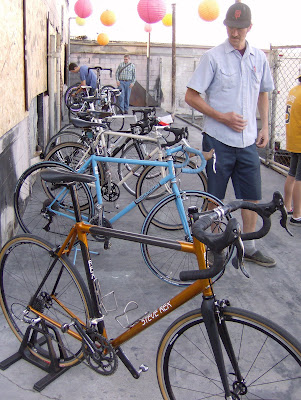 This behemoth spouted flames out of the three torches on top....no doubt, this machine was constructed for 'Burning Man'. As you can see, hundereds of folks were there to see the bikes, meet the builders and ride in a tiny portable velodrome, the 'whiskey cone'. I think that this was better than any bike show I've ever been to-but then, it wasn't a bike show....it was a party. 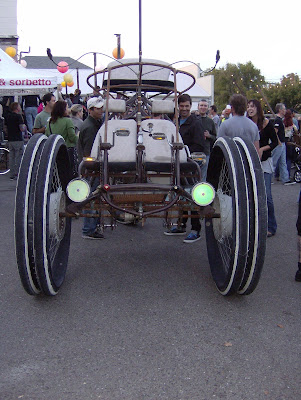 Posted by swiggco world at 8:03 AM No comments: