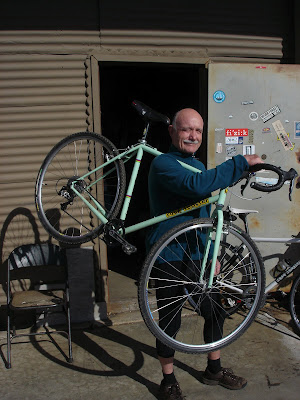 There's a reason this guy's bike has world champion stripes on the seat tube......he's Ron Riley, masters 70+ world cyclocross champion ! This is the first time any bike I have built has been ridden to a world title. Ron has also been masters national champion as well. This is a bit of shop history being made.
Posted by swiggco world at 6:56 PM 7 comments: 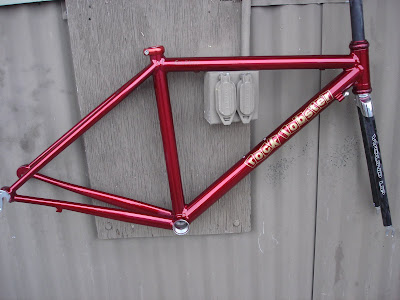 I've got to get this bike built fast as the owner is bound for a stage race in Arizona.....at eleven year old ! 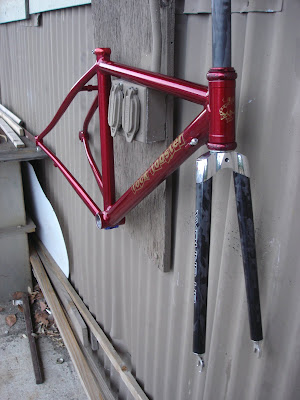 I hope she likes this little 650 wheel scandium rocket sled. It is about the fastest thing I can build on two wheels. 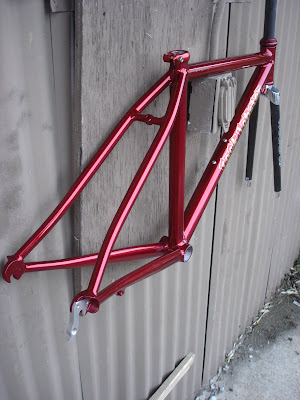 I'm not sure what it will weigh but it won't be very much. I hope to have it all built by Thursday night.
Posted by swiggco world at 6:51 PM No comments:

First batch of the year done 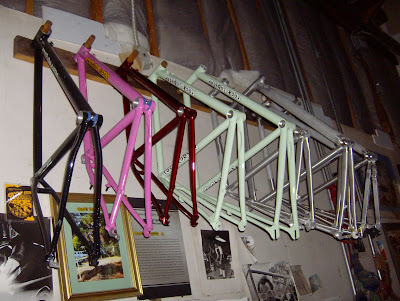 The four unpainted aluminum frames represent my first batch of 2012 , although I also built a couple of steel frames this month as well. Normally, six frames in a month would be pretty low for me but I was gone for eight days at the national cyclocross races...did I tell you that our team won the single speed race ? -Sure I did......I can't stop telling folks. Speaking of which.... 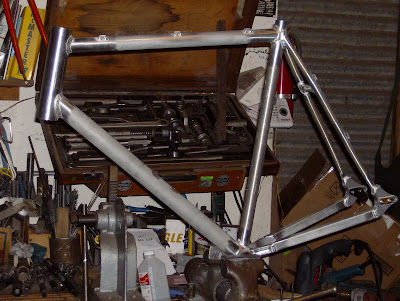 This frame has a lot in common with Aaron Bradford's winning frame except that this rider is a lot taller and a bit heavier as well, hence the use of one of Mike Ahren's lower chainstay yokes. 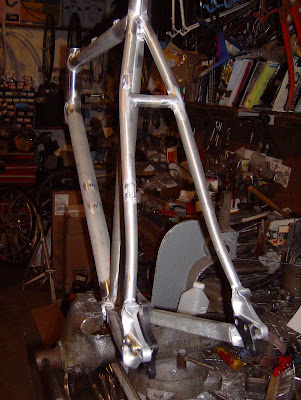 This disc-only frame also has the big head tube for the tapered steerer carbon 'cross fork . 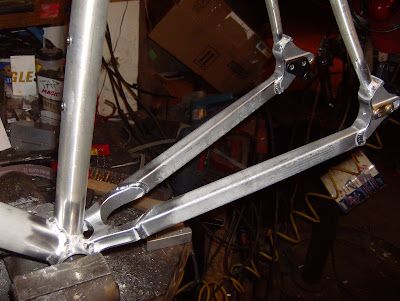 Here's a close look at the yoke and one of my last pair of NOS rectangle Easton 7005 chainstays. This frame will be at the NAHMBS but not in my booth......I'm sure you will see it there if you go.
Posted by swiggco world at 7:36 PM No comments: 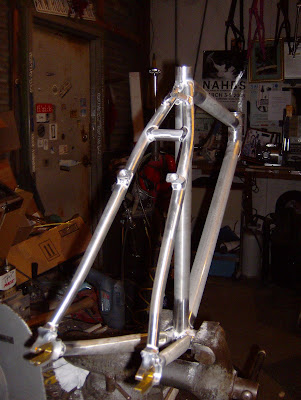 This baby has some new dropouts from Mike Ahrens. Remember, you saw them here first......but not last-they are really amazing. 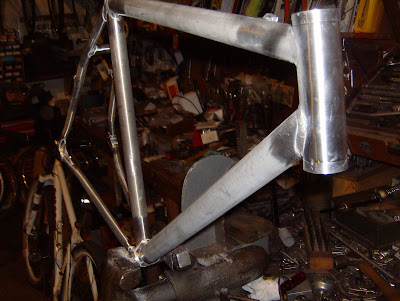 Since two riders from my team got on the podium at the nationals on my single speeds I think that I'll be building many of these over the next year. A national championship is a huge thing for a small builder. 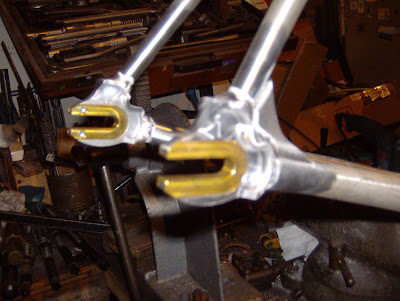 Sorry for the blurry photo.... I hope to have better ones soon. The bike deserves a sharper focus.
Posted by swiggco world at 8:27 PM No comments: 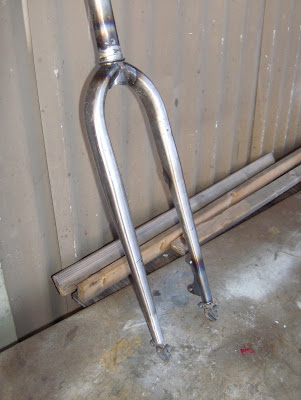 This bike will be jumping the trolley tracks and dodging the cars in San Fransisco. 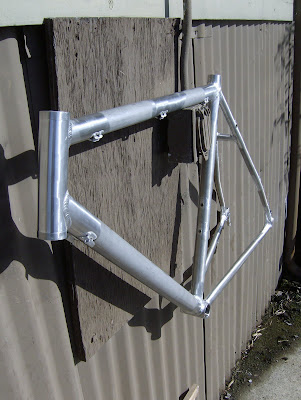 The owner of this frame is a messenger and wanted a bike similar to his current ride, a short upright bike with a fairly high bottom bracket for cornering. My hope is that this really fits the bill. 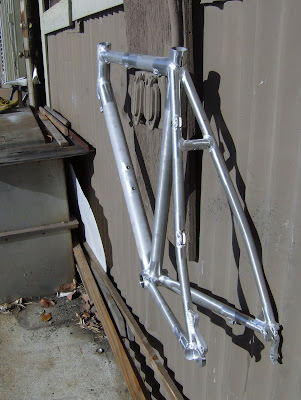 I made it so there was room for fenders and 28 c tires for all weather conditions. There's even some rack rivnuts in the seatstays-a first for me on an aluminum bike. 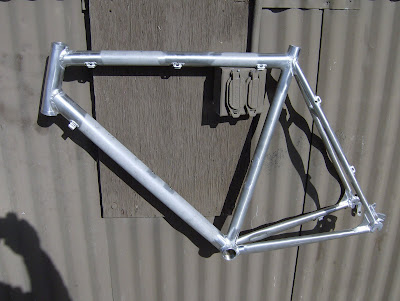 The 44 mm downtube is just about the stoutest one I have. Inspite of the beefy tubes, the fame is pretty light.
Posted by swiggco world at 6:04 PM 1 comment: 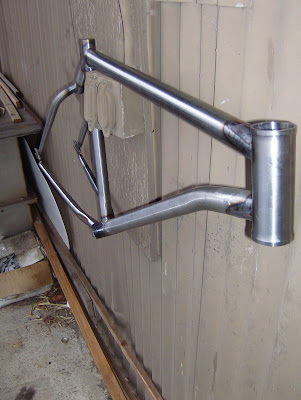 I would love to tell you all about this frame but I would have to kill you. All will be revealed at the NAHMBS. 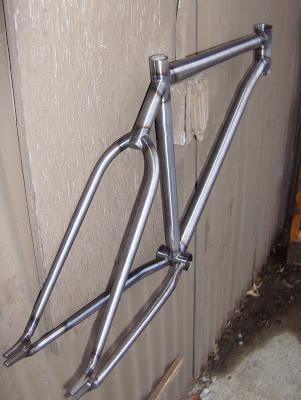 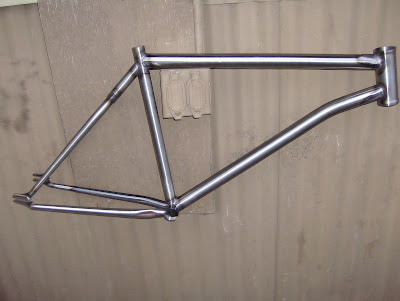 I will say that the most interesting stuff on this frame might not be easy to pick out in these photos......
Posted by swiggco world at 6:15 PM 2 comments: 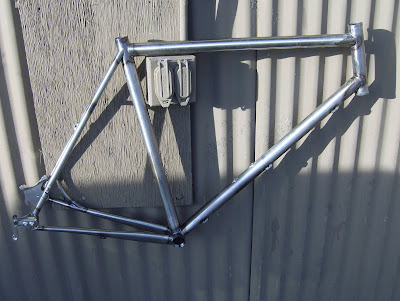 A close look at this frame will reveal the seatstay-splitter. This is a giveaway sign that the owner wants the ability to run a Gates carbon belt. Would I run one ? I really can't say. This is only the second belt-drive frame I have ever built so I don't think it is catching on in my shop but it is nice that Paragon makes hardware for the application. 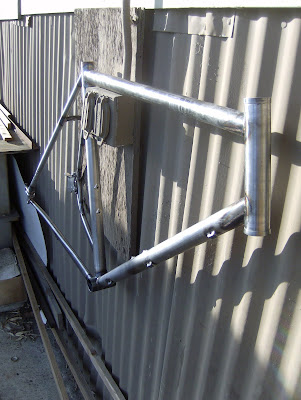 This commuter frame will have the ability to run fenders and an Alfine internally geared hub as well as disc brakes. The fork will most likely be an Enve disc/cross fork. 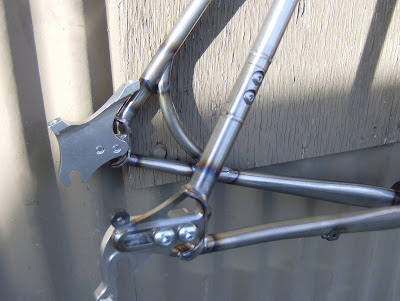 Here's a detail of the rear of the frame where all the complex bits live. I guess one could even set the bike up with a 1x10 derailleur setup.......or single speed......the possibilities are many.
Posted by swiggco world at 6:51 PM 3 comments: 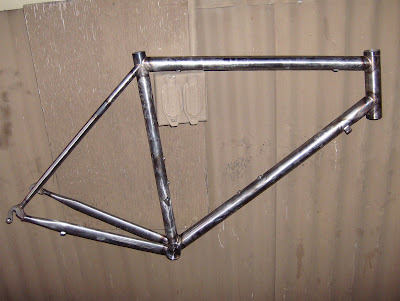 It was late in the day and getting dark when I took these photos so they reflect that. I built this frame with a mix of Columbus spirit and life tubes at the request of the customer. I like the quality of the metal and the distinctive shape of the chainstays. I did cheat and use a NOS Tange presitge " Concept" seat tube to really stabilize the BB. I think the power transfer on this 3 lb. 9 oz. steel frame will be very good. 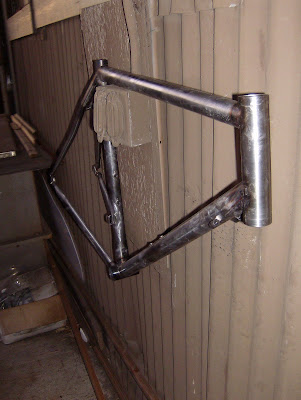 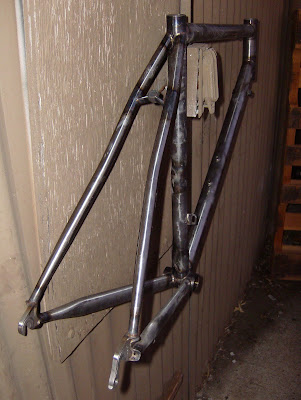 Usually I bend my seatstays myself. These came pre-bent, a bit more money but a time saver so it was a wash expense wise. The narrow profile is pretty cool , perfect for a road frame.
Posted by swiggco world at 6:18 PM 2 comments: 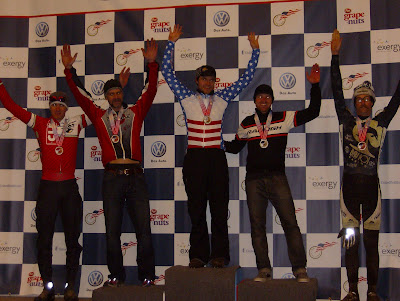 Two of the five spots on the single speed podium were occupied by Rock Lobster team riders : Aaron Bradford 1st place, Scott Chapin 4th place. Maybe it's good to know that the bikes didn't hold the riders back-that how a good bike is supposed perform.
Posted by swiggco world at 6:48 PM 1 comment: 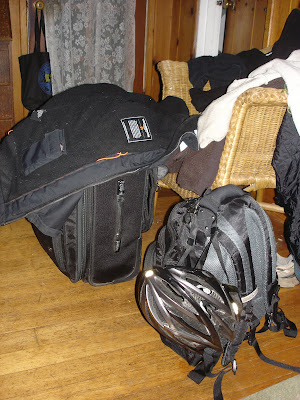 If you get an answering machine at the shop there's a good reason for it. I'll be out of town as of tomorrow to go to the cyclocross national championships in Madson, Wisconsin. Sure, I will probably get my pathetic dreams dashed in my race, but there are some real racers on the team whom I will be working for. My guess is that there will be some muddy bikes to wash in the coming week. My job-help keep the fast guys rolling and if they are rolling fast, stay the hell out of the way !
Posted by swiggco world at 6:10 PM 1 comment: