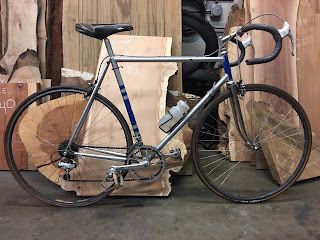 The very first frame one builds is very significant. The second one maybe not quite as much but still it meant that you didn't stop at one. When you get to the fourth there's not much fanfare or significance in terms of a milestone to most observers but this frame seen here , being my fourth was probably more important than the three built before it. 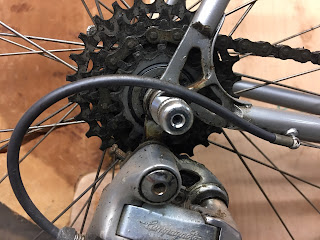 What I was trying to do with this frame was to show that I could be artistic, even though I was very new at frame building and pretty much didn't know crap about the craft - other than bits of advice I had gotten and my experience building the first three frames. I was hell-bent on emulating the style of a great builder of the day-Bruce Gordon. I was so taken with his work that I devoted at least 200 hours of painstaking work to create this frame and fork. I got some exotic Art Stump rear dropouts, some Columbus PS heavy track tubing and some long point Prugnat lugs - which I would devote many hours to , completely reshaping and sculpting them to the best of my beginner's ability. 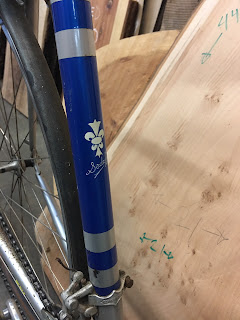 At the time I was getting ready to start my second season of racing- something that I loved to do but was woefully bad at doing. I was on a bike that was much too big and with my half hearted training along with a problem with a bit too much partying had trouble keeping up with the lowly cat. 4 fields. I was always getting dropped, even in the flat race. My back was usually in pain and in spite of my enthusiasm I was usually pulled out of the race well before the finish. It was very discouraging. 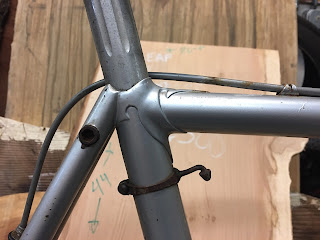 I decided that a better fitting bike might help and I had the better part of a winter to try to build one myself. I spent many nights after work in a garage filing and fitting. I didn't want this frame to be a hastily put together affair-I wanted it to look different, ride different and be something that nobody else in the field had, for better or worse. After many weeks of spare time spent breathing metal dust and cutting my fingers on sharp steel edges I had my frame and fork ready to paint. There was only one problem- the Tassajara road race was the next morning. 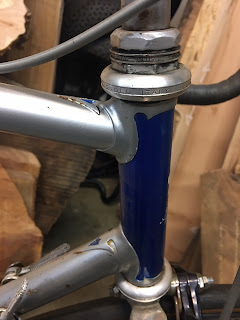 In order to debut my new bike at the race I would need to paint it and assemble it the day before, hopefully getting in a short test ride to make sure that it would hold up to the 18 miles of the race from Danville to Livermore, Calif. Not having time to do a proper paint job I took out a can of black Rustoleum and went to work. Soon I had the frame and fork a nice semi-gloss black, pretty much obscuring all the time consuming fine work I had done on the lugs- the bike looked 100% un-noteworthy. I took it out for a short ride and did the final adjustments. 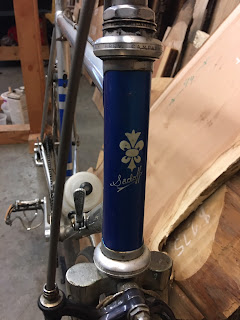 The next morning I loaded up my 1961 VW bug and drove to Danville for the race. I had an older racing buddy with me who told me to get out and ride around until right before the gun goes off for my race. I rode the new bike through the neighborhood while about 90 other cat. 4 riders lined up to start. I must have been pedaling around for 30-40 minutes before I got back to the starting grid. Just as I rolled up the gun went off and I immediately rode around the entire field and got to the front. My older racing buddy was happily yelling at me to go as fast as I could. 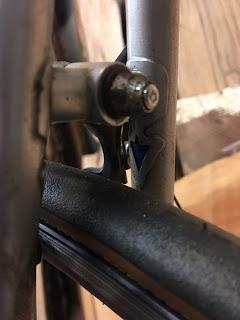 About halfway through the race I was sitting near the middle of the field at the start of the main climb of the day. All at once a whole group of riders fell into a huge pile that blocked most of the road. Only five riders were ahead of the crash and they sped off. I managed to get around the huge pile of bikes and bodies and heard someone behind me yell : "Go Go Go !!". I'll never know if they were yelling at me but go I did on my brand new black spray-painted garage built wonder. The bike felt really quick-much quicker than the bike I had been racing on the year before. It didn't take long for me to get up the climb and catch the leading five riders. When  they saw me they were a bit surprised but they welcomed me and I started pulling pace as we knew that the prizes went six-deep and we didn't want any other riders to catch us. 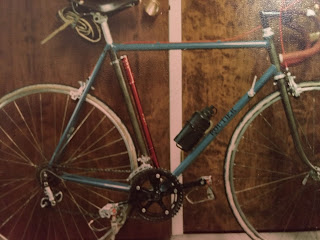 We crested the climb and started down a long flat stretch into a block headwind. Our group began shrinking-someone on a Peugeot PX-10 in a Bell helmet was really putting on the pressure and soon there were only three of us. After a few miles I got dropped and the two leaders rode away from me. I was not doing very well in the head wind and saw that the other three were going to catch me. I sat up and when they caught me I got back into the pace line. The finish of the race was just after going under a freeway overpass - it had about a 100 yard drag uphill. I started the sprint in the back of the other riders and passed them all right before the line- I was third !
After wishing I could just finish a race for the previous year , now I was in the top three . When I got my prizes I realized something - my back had not hurt during the entire race-I had always assumed that my back would hurt during a bike race.......now it didn't and I started thinking that maybe there really was something to having a good fitting bike . It was about at this point in my life that I thought that I would have a future in bicycle racing and frame building. Well, the racing didn't really pan out-although a couple years later I won a race on my 10th frame.

A word about the photos. All of the photos of the bike except for the last one are what it looks like currently. The last photo was taken not long after I finally had properly painted it. The blue was sprayed on catalyzed polyurathane. The darker portions of the frame were a not so successful gun-bluing treatment.The decal on the down tube says :"Routier" which was the street I lived on at the time. My first 6-7 frames were branded that name. When I repainted it silver in 1982 I branded it with my last name and had painted it ,along with a fleur de lis on the head tube and seat tube. There's probably about 8-10 branded this way. In 1984 the brand was changed to Rock Lobster, as it still is today.

A word about the history of this bike: This bike was my main bike for only a couple of years.It was really stiff and the more I raced, the more I wanted something that ate up the road shock . When I built my 10th frame, number 4 went into mothballs for a few years. In 1985 my girlfriend at the time needed a new bike -I let her take a spin on it and she liked it. She was 5'10" so she fit on the bike well. Earlier this year I asked her if I could come over and take photos of the bike as I had not seen it since we had broken up in 1990. Not only did she say yes to the visit, she gave me back the bike saying that she no longer rode it. That is why I have it today. I have done a tune up on it and was registered to ride in in the Eroica California this year but with Covid it got cancelled. Not to be deterred, I took the old bike out for a ride a few weeks ago and remembered just how quick the front end felt and how stiff the frame felt. It is a very distinctive bike and even though it was built by a 24 year old with very little frame building experience , I  can say that it is a good bike.......a very odd bike, rough at the edges but still a good bike.

Posted by swiggco world at 8:44 PM

Hello everyone on here my name is Fumo Sadiku living in Malindi City Kenyan I want to tell a little more about a good hearten man called Benjamin Breil Lee working with funding service as loan officer, Mr Benjamin Breil Lee helped me get a loan of 37,115,225.00 Shillings on my trying time trying to get back on my feet to raise my business I know there are some of you here who are in financial difficulties to talk to Mr Benjamin on what's app +1-989-394-3740 Or  also with his personal E-mail on 247officedept@gmail.com I'm so glad for what he did for me and for his Bank accountant as well Accountant Hernandez Lucas Thank you very much for your work well done.