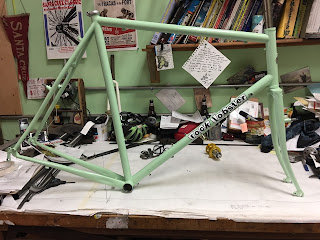 Yes, those are cantilever posts. Yes, that's a 1" steerer on a crowned fork. Yes, that's a level top tube. And, yes- those are down tube shifter bosses. This is not the new formula- it is the classic. 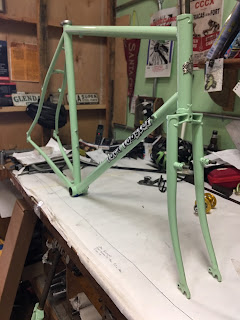 I found a source that has continued the manufacture of the Pacenti line of fork crowns. I was worried that they were extinct but now there seems to be an endless supply- not something you can say about many frame building materials in the 21st century. 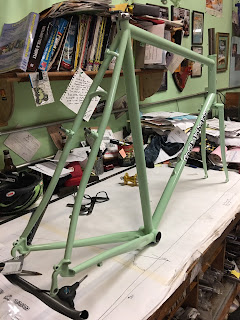 The frame will be going to a place where it rains a bit so there's provisions for fenders. There's also room for some pretty big tires, at least by CX standards. The only newer feature on this frame would be the third set of bottle mounts under the down tube that are so popular now.
Posted by swiggco world at 6:27 PM No comments: 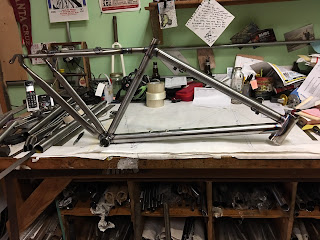 This one is a bit of a roots build- 26" wheels, QR rear axle and IS tab for the disc brake. 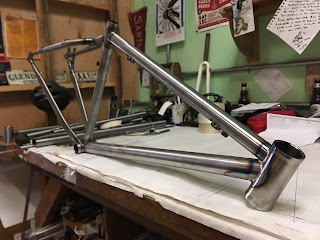 This is not the first or last 26" MTB frame of the year- it seems like there's  a bit of a revival going on- not so much for cross country rigs like this but more for dirt jumpers . I built one a couple of months ago and I will be building another one soon. 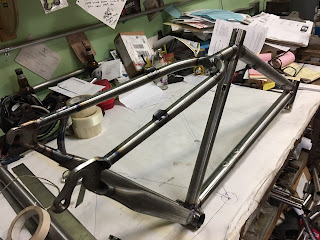 This frame is built for a 100 MM fork and 2.3" tires, although it looks like the owner will more likely run 2.25's most of the time. This frame was really fun to build and I'm really happy with how it came together. I even got to use some rare single bend Columbus short taper chain stays.
Posted by swiggco world at 8:01 AM No comments: 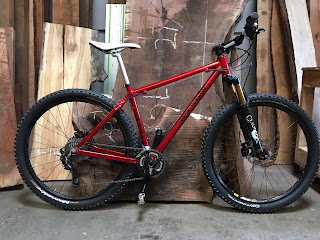 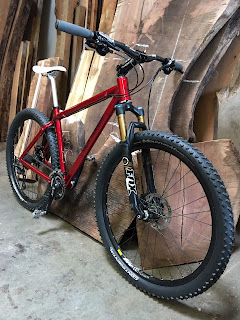 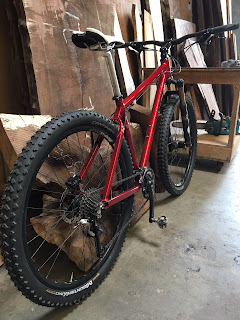 Posted by swiggco world at 7:00 AM No comments: 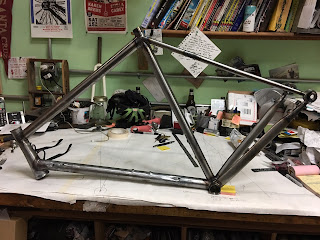 This is becoming a thing- disc brakes on the road. There are advantages besides just the stopping power. The ability to get a little bigger on the tires is a nice plus. 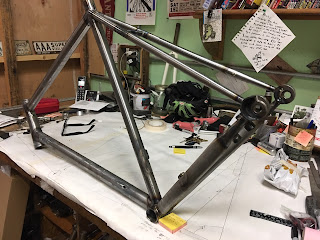 The hydraulic line for the flat mount rear caliper goes inside the down tube. There's a steel tube that the line fits into so that you don't have to do a major fishing expedition to get the line installed. 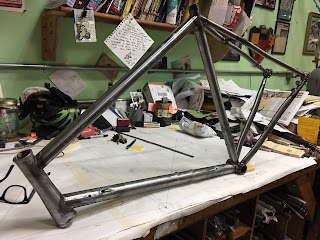 The frame will be fitted with an Enve disc/road fork. The idea is to make a bike that will take 30-32 tires but still have a fairly short wheelbase. This frame is probably going to see a bit of dirt in between the time on pavement.
Posted by swiggco world at 7:10 PM No comments: 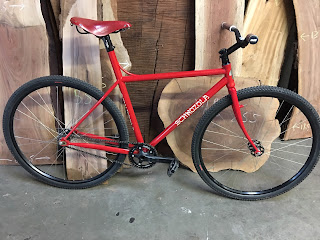 Yes, you can own the last of the red-hot Schnozolas. This is a fat tire fixed gear- think of the fun you'll have trying not to endo. The frame, fork and stem were built by me- the powdercoat on the frame was done by my partner in crime, Bruce Gordon. Bruce has quit and no longer has a shop so the seven Schnozolas in the world might be it. If you are about 5'10" you might like this unique bike that was built for the handbuilt show about 4 years ago. I'm looking to get $ 1,800. It has some nice stuff on it and it has not been ridden much. You can call me at the shop at 831-429-8010 or email me at paul@rocklobstercycles.com   I'll even put a front brake on it for you if you want. 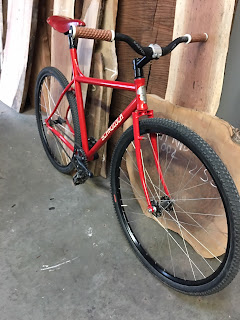 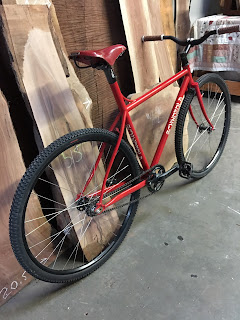 Posted by swiggco world at 7:33 PM No comments: 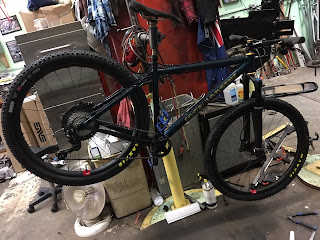 This one is going to a local rider who is also on the CX team. She is a pretty fearsome downhiller, having won Downieville back in the day. Maybe this bike will mark her return to the Sierras. 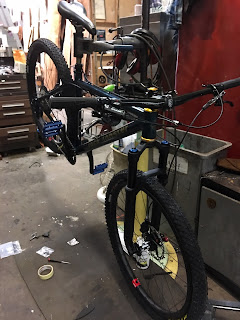 Posted by swiggco world at 8:33 AM No comments: