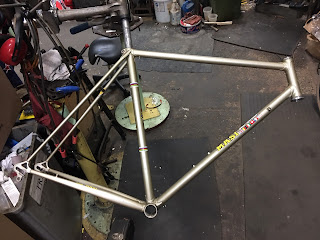 A friend of mine has been given a pretty cool old bike. The reason I have it is to have the paint in the area around the BB shell touched up. I didn't do the work but sent it to Joe's bicycle painting in Watsonville. About two weeks later it came back and it is perfect. The original decals and patina are still on the frame but the rust and missing paint on the BB has been dealt with. Now my friend has the task of building it all back up again. The bike has what appears to be all original Campagnolo from the day it was originally sold. 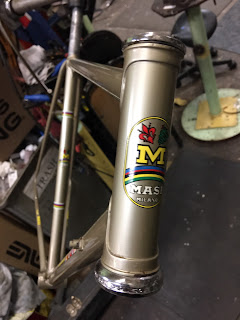 The workmanship of the frame is really good, even for a Masi. This one is an Italian one and an early one at that. It is exactly my size but hey- it isn't my bike ......maybe I'll get to take it for a ride some day.

Posted by swiggco world at 5:58 PM