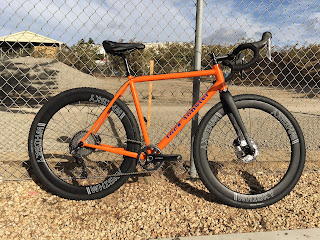 During Covid, bicycle parts are in short supply and one has to get resourceful. I have about 5 builds going right now but with the scarcity of parts from the suppliers, this is the only one that has been completed so far this month. 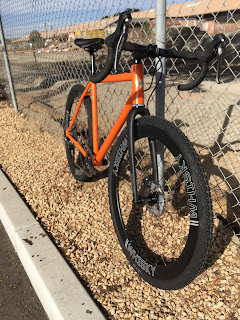 The customer specified Shimano GRX-810 and fortunately I had most of the parts in stock. I did have to wait a coupld of weeks for a right hand shifter but when that came I was about to get the bike rolling. I had a set of I-9 hubs and some Whiskey carbon rims that I had originally bought for myself but the customer comes first so this lucky guy og a set of deep-section carbon tubless wheels at a time when none were available. 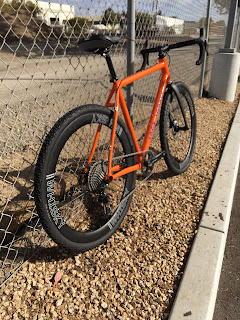 The bike has a 7005 aluminum frame and is sporting a Jen Green silver headbadge. Originally I wanted to get a Whiskey post to save the customer money but when that was not in stock I opted for an Enve which matches the fork and is probably a better post as well. The dark blue decals match the King headset and BB in Navy pretty well and the whole thing has a bit of a Mercx '90's look.

Posted by swiggco world at 8:51 AM