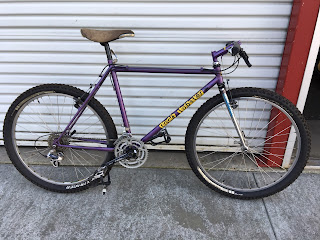 Not sure if I have put photos of this one up lately but here it is in all its primitive glory- team issue fillet brazed MTB # 16 from 1986. It has had a repair and a repaint but that was many years ago. It is still owned by the second owner who has had it since he was a teenager. 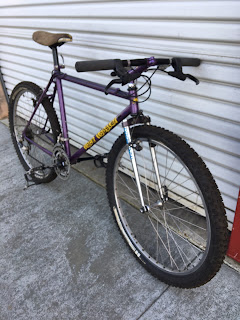 As you can see the bike is fitted with an early Bontrager fork and some Cooks bros. cranks. The Suntour XC shifters still work and the XT short cage rear der. is a rare item. 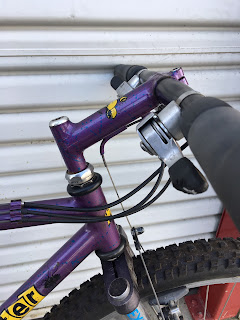 I built the stem as I was doing back then- it was common to get a frame , fork and matching stem. I think I sold frames like this in 1986 for around $ 495 unpainted. This one has the old vinyl decals that I had to cut out with scissors from a sheet. Things were a bit different then but there are some similarities- I still build the frames one at a time .
Posted by swiggco world at 6:41 AM