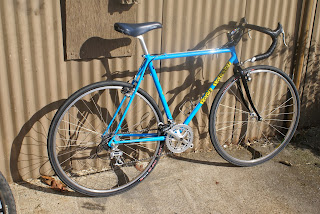 I'm pretty sure it was 1990 or maybe 1989 that I built a run of 8 cyclocross frames and forks-this was the first significant batch of CX frames for me. I did several for a bike shop team in 1986 but these are the first that were available for sale to the general public. 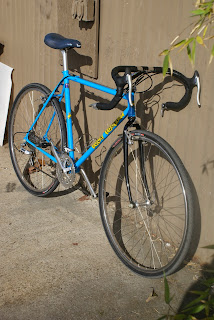 The frames were fillet brazed ( unfiled !)from Tange # 2 cro-mo steel although a couple of them were custom ordered in Columbus s.p. Seven of the eight were built for a now defunct shop called 'Cyclecraft' in Cupertino, Calif. The # eight frame I built for myself. This one in the photo still has it's original blue paint.The owner brought it by last month and I have built a stem for this bike with unfiled fillets, justlike the original would have had. It wasn't until 1992 that I started building tig welded CX frames.
Posted by swiggco world at 5:00 PM

very neat. new bikes are so good, great builders, great tubing, good components, but gosh darn, i do love a classic. this cross frame is wicked awesome. tange #2! columbus sp! fillet brazed! as soon as i get my time machine runnin', ima gettin' one for me.